LinkedIn prohibits its users from uploading, posting, emailing, or making available any unsolicited or unauthorized advertising or promotional materials.12

Google+ prohibits online promotions directly from a Google+ page, but allows users to “display a link on your Google+ Page to a separate site where your Promotion is hosted so long as you (and not Google) are solely responsible for your Promotion and for compliance with all applicable federal, state and local laws, rules and regulations in the jurisdiction(s) where your Promotion is offered or promoted.”13

In contrast to the prohibitive policies of Google+ and LinkedIn, Twitter specifically authorizes users to conduct promotions on its platform. In fact, Twitter’s Guidelines for Contests on Twitter (which, despite its name, applies to both contests and sweepstakes) appears to encourage promotions provided that the Twitter user experience is not compromised. For example, Twitter requires contest promoters to disqualify any user who enters a contest from multiple accounts; encourages entrants to include an “@reply to you” in their update so that all the entries are seen; and discourages multiple entries from the same participant on the same day, presumably to discourage posting of the same Tweet repeatedly (à la “whoever re-Tweets the most wins” variety).14

The sheer reach of social media promotions can work both great magic and harm for a company. In November, 2011, for example, Australian airline Qantas launched its “Qantas Luxury” competition on Twitter, asking users to describe their “dream luxury inflight experience” in exchange for a pair of Qantas first-class pajamas and a toiletries kit. Reportedly that same day, more than 22,000 tweets were sent using the designated “#QantasLuxury” hashtag, many critical of the airline for having canceled its flights a month earlier due to a union strike, and many ridiculing the airline’s service (and its pajamas!).

Companies should always be prepared with a coordinated legal, PR, and social media marketing crisis response plan in the event their social media contests or sweepstakes backfire.

On November 4, 2009, Facebook issued new Promotions Guidelines that contain specific rules for administering sweepstakes and contests on its website. These guidelines were again most recently revised on May 11, 2011. Under this revision of the guidelines, administering a promotion on Facebook means “the operation of any element of the promotion, such as collecting entries, conducting a drawing, judging entries, or notifying winners.”15

As of the date of publication, promotions are subject to the following guidelines:

With the exception of the three functions noted above, entry into a promotion can never be conditioned upon a user providing content on the site, including liking a Wall post or commenting or uploading a photo on a Wall. In 2011, Scandinavian Airline’s Facebook page was temporarily suspended for violating this rule. To promote a million seat fare sale, SAS ran a competition on Facebook where SAS fans could “grab” a free trip (see Figure 1.1). Fans were asked to change their profile picture into the custom made “Up For Grabs” image and post a matching image on the company’s Facebook Wall. Although the clever promotion garnered a lot of social media buzz, it used prohibited Facebook functionalities (posting a photo, for example) as a condition of contest registration, in violation of Facebook’s rules. 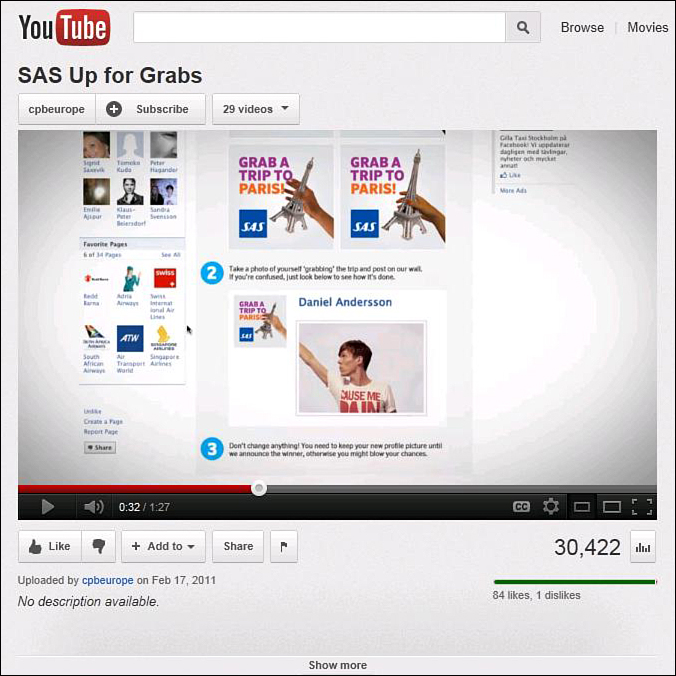 Contiki Vacations’ “Get on the Bus” Promotion offered the travel firm’s Facebook fans aged 18 to 35 a chance to win a free trip worth up to $25,000 (see Figure 1.2). The “Get on the Bus” promo challenged fans to choose from one of eight travel destinations, gather a crew with four friends together to fill a virtual “bus” (which incorporated music, movies, Likes and other interests that users had in common), and then collect as many votes as possible in order to win. To gather votes, participants were encouraged to ask people to Stumble, Digg, Blog, Buzz, Tweet and Share their bus page, create YouTube videos explaining why their bus should get the most votes, ask celebrities to tweet on their bus’ behalf, and create handouts with their bus link to give to friends. Interestingly, just as the “Get on the Bus” promo was launching, Facebook changed its policy about the use of Likes—that is, no Facebook features or functionality, such as the Like button, could be used as a voting mechanism for a promotion. Contiki’s response? It created a “Vote” button that was displayed above each bus instead! 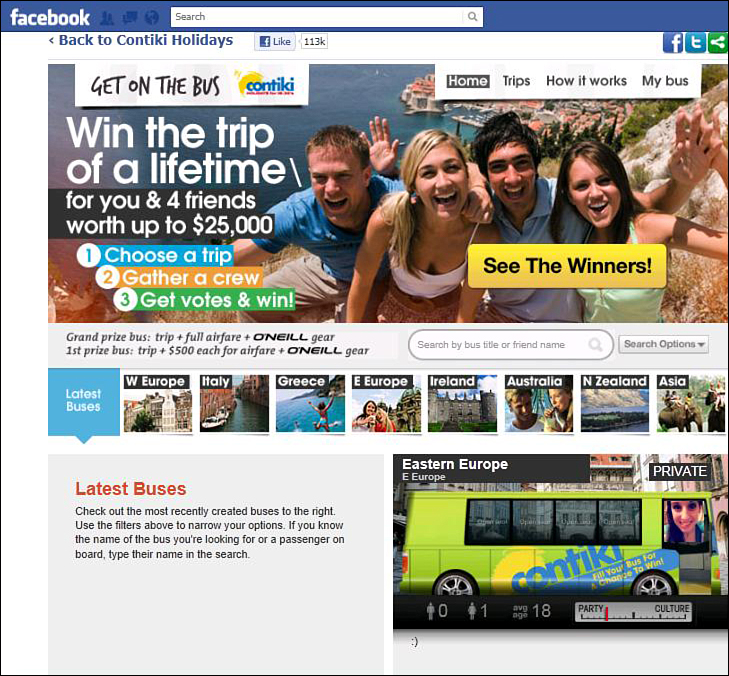 Figure 1.2 Contiki Vacations' "Get on the Bus" Promotion.

Many companies appear to be ignoring Facebook’s Promotions Guidelines, but it is only a matter of time before more and more Facebook accounts of both small businesses and major brands are suspended (or disabled) due to noncompliance.

In the first case of its kind,16 the National Advertising Division (NAD), the advertising industry’s self-regulatory forum, determined that Coastal Contacts, Inc. must provide, at the outset of any “like-gated” promotional offer, a clear and conspicuous statement for all material terms and conditions included in its Facebook promotion requiring consumers to like a product page. (Like-gated promotions are those in which a company requires a consumer to like its Facebook page to gain access to a benefit, such as a deal, a coupon code, or other savings.)

In this case, Coastal Contacts told consumers on its Facebook page to “Like this Page! So you too can get your free pair of glasses!” Competitor 1-800-Contacts challenged the promotion, however, claiming that Coastal failed to disclose that additional terms and conditions applied (for example, that consumers were responsible for the cost of shipping and handling) until after the consumer entered the promotion by liking Coastal’s Facebook page. While restricting a coupon, deal, or discount to users who like a company’s Facebook page is a popular promotion technique used by brands and businesses, companies should never use fraudulent or misleading offers to increase the number of likes on their Facebook page (for example, by claiming something is free when it is not). Consistent with FTC advertising guidelines (discussed in detail in Chapter 2), the NAD specifically observed that requiring employees to “like” a company’s Facebook page without informing consumers that they work for the company is a fraudulent or misleading means of obtaining “likes.” Furthermore, although not addressed by the NAD, to comply with Facebook’s Promotions Guidelines, Facebook-based “like-gated” promotions need to ensure that entry is not conditioned solely on liking a page.

This chapter provides only a preliminary overview of the potential legal pitfalls facing companies which operate promotions through social media channels. Further, there are a variety of other statutes covering special types of promotions which were not addressed in this chapter, including: in-pack/on-pack promotions; bottle cap sweeps; preselected winners; everybody wins; retail promotions; promotions aimed at children; Internet and mobile promotions; direct mail promotions; and telemarketing promotions. Social media campaigns conducted in conjunction with these promotional techniques should be exercised with an extra degree of caution.

As the popularity of social media sweepstakes and contests continues to grow, the laws regulating this space will surely follow. It will probably be a few more years before we have a comprehensive statement of the law governing these issues—but even then, the rapid pace of technological advance makes obtaining a definitive set of laws almost impossible. Careful promotional planning, structuring, and oversight are the best means of running successful and legally compliant social media promotions. To that end, companies should heed best practices for social media promotions as summarized in Figure 1.3. 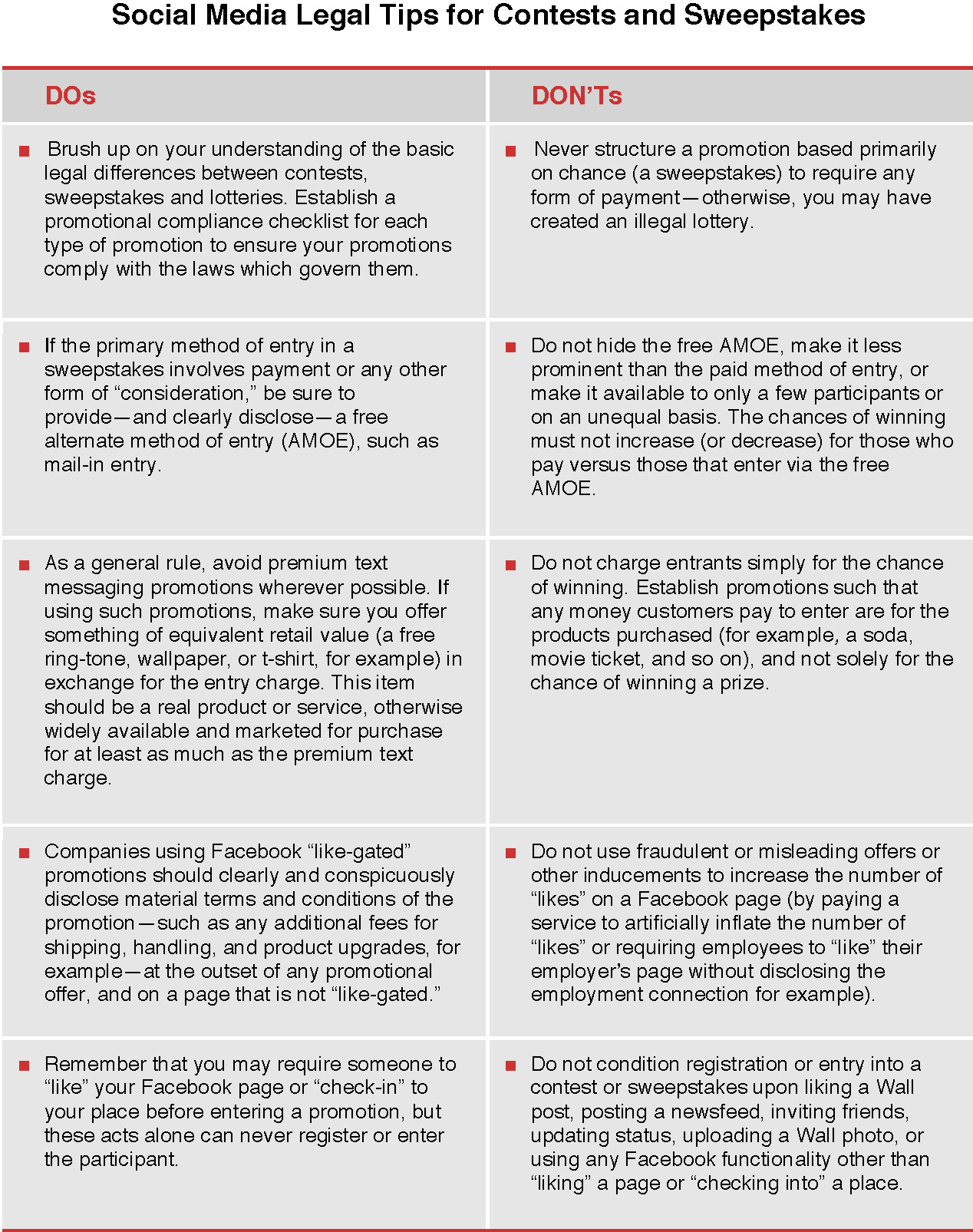 The information contained herein is not intended to constitute legal advice or a legal opinion as to any particular matter. The contents are intended for general information purposes only, and you are urged to consult with an attorney concerning your own situation and any specific questions you may have.

Robert McHale, Esq. is the founding Partner of R | McHale Law, a full-service law firm whose corporate practice represents clients on a wide variety of IT and intellectual property law matters, including privacy and data security, copyright, trademark, licensing, and other proprietary protections. He may be contacted at: robert.mchale@rmchale.com.