Page 1 of 1
Johnson (John) M. Hart, author of Windows System Programming, shows how to speed up simple file comparison by a factor of 10 or more, using parallelism with speculative processing, combined with memory-mapped files. These techniques work just as well in Linux/UNIX, and they can be extended to parallelize and speed up other file and data stream computations.
Like this article? We recommend 

Nonetheless, many SFP implementations (including the Windows and POSIX commands) are much slower than necessary, as they fail to exploit two basic techniques: parallelism and memory-mapped files. These techniques are enabled by three advances in commodity computer systems, including laptops:

The examples are much faster than comparable Windows and POSIX commands; WSP4 provides performance data.

In a recent paper, "Sequential File Processing: A Fast Path from Native Code to .NET with Visits to Parallelism and Memory Mapped Files," (SFP-Fast) [7], I've shown how the same techniques can be extended from Windows native code to C#/.NET managed code.

These two examples are cases of Toub's [8] "delightful parallelism," in which the file processing task can easily be divided into smaller "stripes" (collections of regularly spaced, fixed-size blocks) to be processed concurrently by separate tasks. Not all SFP problems are so delightfully parallel, however, and now I'll show how to solve a harder problem that requires "speculative processing" (Toub, p. 94). The performance results using native Windows code are excellent, relative to the Windows commands. The paper will show performance graphs, show the solution's limitations, and describe the solution strategy. Complete code is in the WSP4 Examples file, and spreadsheets with raw performance data are downloadable from the author's website.

Parallelism is a hot topic, widely discussed (see the "References" section). Nearly all writers, including this one, agree that parallelism is a difficult topic and that, in general, it's challenging to find and exploit the parallelism in many computational problems. It's even more difficult to convert legacy code to exploit parallelism. Parallel programmers face challenges including but not limited to shared data, locking, deadlocks, race conditions, false sharing, and identifying computational tasks that can run concurrently.

However, this complexity shouldn't stop us from exploiting parallelism when it's relatively easy to achieve in practical situations, such as the file processing and file transformation tasks mentioned earlier. Furthermore, the experience and confidence gained from solving simpler problems may help to solve some harder problems in the future.

The benchmark problem solved in this article involves speculative processing:

Speculation is the pattern of doing something that may not be needed in case it actually is needed. This is increasingly relevant to parallel computing, where we can take advantage of multiple cores to do more things in advance of their actually being needed. Speculation trades off throughput for reduced latency, by utilizing resources to do more work in case that extra work could pay dividends.

This article's specific benchmark problem is to implement a fast version of the Windows COMP command (called compMP), which compares two files, byte by byte, and displays the mismatches in order of occurrence. compMP differs from the COMP command in several ways that are useful but challenging to implement:

The implementation challenges occur because mismatches can be identified at any time in different tasks (threads) and may not be found in the order in which they occur in the two files. Therefore, the solution needs to keep track of the earliest mismatches and, when the maximum mismatch count (8) is reached, other search tasks should terminate if they're searching past the last mismatch location.

This section gives performance results to show that the effort is worthwhile. Following sections will discuss the key implementation considerations.

First, in order to become familiar with the command syntax, Figure 1 shows results on two short files (3,968 bytes) which differ in two locations. The program name is compMP (memory-mapped, parallel compare), and there is also a run of Windows COMP. Notice the command-line parameters to specify block size and thread count (which is negative in one case to force conventional file processing). 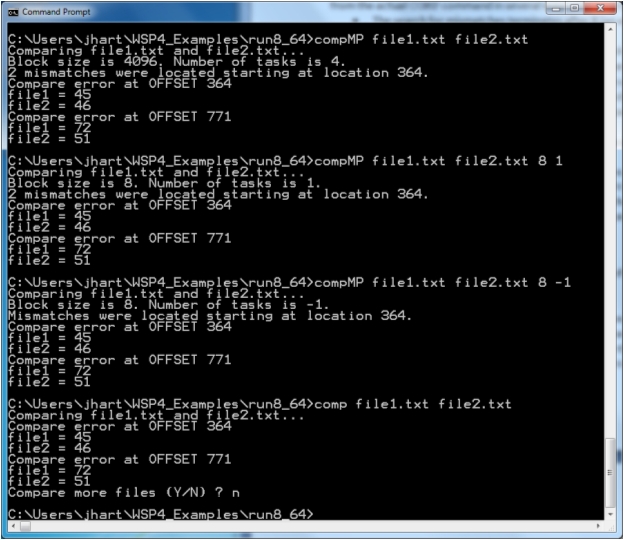 The compared files are identical and 640,000,000 bytes long. This size was selected as follows: 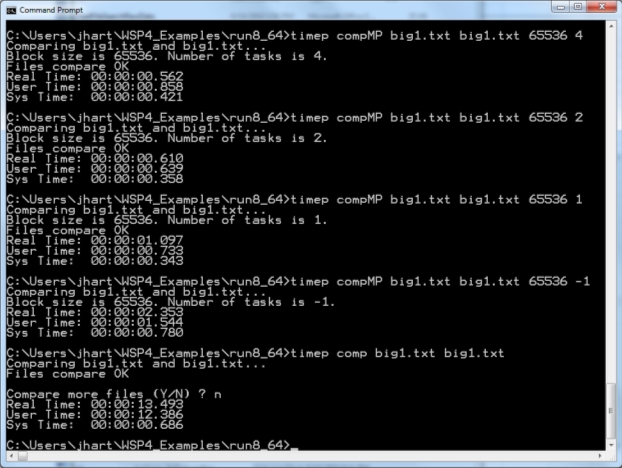 It's important to realize that the compared files are "live"; that is, they have been referenced previously and are at least partially cached in memory. Therefore, there is very little actual file I/O, and we're measuring the time required to process the data. But testing live files is a realistic and important test scenario. "Fresh" files, requiring actual I/O, make the timing results similar for all methods, as the file I/O time tends to dominate.

Figure 3 is a graph showing compMP and Windows COMP results for different file sizes, using both conventional file processing (65,536 byte blocks) and memory-mapped, parallel file processing. As Figure 3 shows, compMP is not efficient for very large files (discussed in the next section). 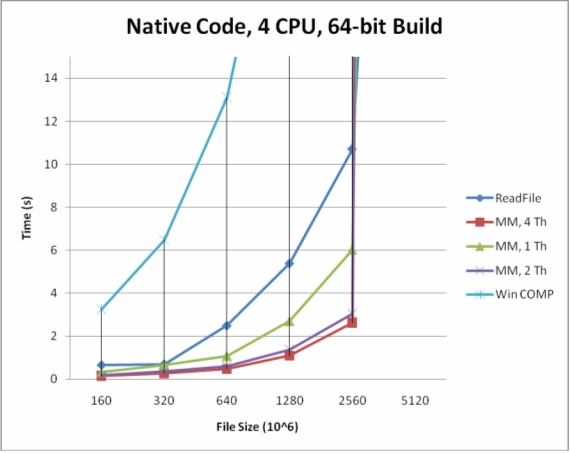 Figure 3: compMP performance as a function of file size and number of threads.

compMP, with a thread for every processor (the red line), is significantly faster than other solutions for files of "moderate" size. Efficiency requires sufficient physical memory to hold each file, and the test system RAM size is 8GB, not enough for two 5GB files.

The four threads cause page thrashing, as the threads can be accessing the file at different locations; and the elapsed time, while highly variable, usually exceeds 500 seconds. Two threads provide slightly better performance (about 400 seconds), but one thread (the green line) is best.

The elapsed time is off the charts for the 5,120GB files for all solutions, but here are the numerical results for the three single-threaded solutions:

These results suggest a simple adaptive strategy (not implemented) for compMP, which would appear to beat Windows COMP in all cases:

Results on older 32-bit systems are similar for smaller files. The 320MB file test worked well, but the 640MB files couldn't be mapped due to virtual address space limitations. compMP should extend its adaptive strategy for 32-bit operation.

The source code is available at the WSP4 support site. A ReadMe.txt file is available, and you should open the compMP solution in the Projects2008_64 folder, which contains Visual Studio 2008 64-bit projects. The source file is CHAPTR14\compMP.c, and the project settings are consistent with other WSP4 examples, as described in ReadMe.txt.

File comparison, which in this case searches a file pair for a limited number of mismatches, lends itself to speculative processing because there's no state as we scan the file, other than the shared mismatch data. Two bytes are either the same or different. If they're different, we log the mismatch. In either case, we can then compare the next byte pair. There's no problem when scanning an individual block, as there's no concern about the state when starting to scan the block.

Searching a file for a regular expression is an instance of a more complex problem, as there's no way to know the state when starting to process a file block. You need to process the file sequentially from beginning to end. If the search pattern is very simple, such as a constant string, a little ingenuity can overcome this problem, by allowing a thread to continue past the end of a block into the next block.

The general regular expression doesn't have an easy, apparent solution using speculative or any other form of parallel processing, but "whole file parallelism" works well. That is, if several files are specified on the command line, create a distinct thread to process each file. Use shared state to accumulate and order the pattern matches. WSP4 has a wc (word count) solution using whole-file parallelism.

It's straightforward to convert the code to POSIX, although the Windows-specific OS calls and data types should be replaced carefully. I haven't performed this conversion, but earlier results with whole-file parallelism with the wc command indicate that we can expect similar results for compMP.

A future article will extend the solution from native code to C#/.NET code and exploit new .NET 4.0 features, thereby extending the solution in SFP-Fast. This article will also explore other speculative processing patterns.

Johnson (John) M. Hart is a consultant specializing in Microsoft Windows and .NET application development, open systems computing, and technical training and writing. He has over 25 years' experience as a software engineer, manager, engineering director, and architect at Cilk Arts, Inc. (now part of Intel); ArrAy, Inc. (now part of Sierra Atlantic, Inc.); HP; and Apollo Computer. He served as a computer science professor at the University of Kentucky for nine years, and authored all four editions of Windows System Programming. John still enjoys pushing lots of bits around as fast as possible.