␡
Page 1 of 2 Next >
The Nexus 7 is a new tablet and the first Nexus tablet to come from Google and partner ASUS. Running Jelly Bean, it is a fast, smooth, and modern device. Shane Conder and Lauren Darcey, authors of Android Wireless Application Development, 2nd Edition, explain how developers should be ready for it.
Like this article? We recommend 

The Nexus 7 is the latest Android device to receive the pure Google treatment. Made by ASUS in collaboration with Google, the Nexus 7 is one of the first devices to ship with Android 4.1 (Jelly Bean). You've heard all of this before? Yeah, so have we. That's why this review is going to focus more on how the Nexus 7 compares to two other tablets of the same size and why the device experience and expectations matter to developers. If you're here looking for device tech specifications, you've come to the wrong place. The basic specifications are easily available from the Android site, and you can also purchase the Nexus 7 from Google Play. 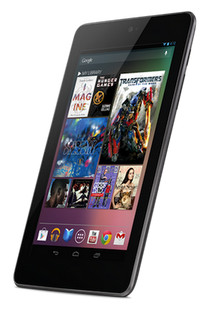 The Nexus 7 comes with Android 4.1 (API Level 16), Jelly Bean, which we've covered separately. As a low-cost device, with a "buttery" system in place, the user experience is very fluid out-of-the-box. As such, it's important that your application be updated to modern Android best practices. Applications that don't live up to these performance expectations and the "buttery smooth" experience will be met with grief in app reviews.

Compared to the original 7" Galaxy Tab, which was the first Android tablet with Google apps available, the Nexus 7 is vastly superior on all fronts. Firstly, the hardware is a year and half newer. Secondly, the software jump from Android 2.3.x is huge in terms of features and performance. Right after the Galaxy Tab shipped, Honeycomb came out for tablets. Recall that Android 2.3.x was not a tablet-optimized platform. And it shows. Still, the Galaxy Tab was—and still is—a relatively fast device. With a single core processor, its age shows, though.

Compared to the wildly popular 7" Kindle Fire, the system experience is just different. The Kindle Fire is based on Android 2.3, so some of the same performance issues are present, despite the Kindle Fire being much more modern. However, the overall system experience is Amazon-flavored. This is a Kindle experience; it's a device designed primarily for reading e-Books, and it shows: Apps and the browser tend to be more of a bonus than key tablet features, so perhaps Jelly Bean is irrelevant because users can read books quite well on the Kindle Fire. It's also not a Google device, so users miss any Google Play content they may own, including your apps and the stock Google and Android apps many developers rely upon to create feature-rich app and platform integration. You have to publish your apps on the Amazon Appstore to target the Kindle Fire, and those apps have to target Android 2.3, which is getting older and losing market share as the newer platform revisions finally start gaining some momentum.

The Nexus 7 is much more media-centric compared to other tablets, such as the Galaxy Tab. It comes with widgets on the home screen showing Google Play content, including Books, Magazines, Movies, and more. It also has the hardware and software to handle the latest in high-performance tablet gaming and other apps that push the envelope on mobile.

The Nexus 7 hardware is about as modern as it gets (for today, anyway). A quad core processor and a dozen cores for graphics processing put the device high on the benchmarks list. As a low-cost device, some considerations have been made, of course. The Nexus 7 currently does not have any cellular radios, just Wi-Fi. In addition, it does not have a rear-facing camera, nor does it have expandable memory with a memory card slot.

While the Nexus 7 comes in two variants, one with 8GB storage and one with 16GB, developers will need to be aware that Google is positioning the device as a cloud device, much as Amazon has done with the Kindle Fire. Don't expect users to be able to download gigabytes of data or create gigabytes of images or video on the device.

The Nexus 7 has NFC (Android Beam), which could have some interesting uses when used in conjunction with a phone that has NFC.

In comparison, the Galaxy Tab came with a fast single core processor, cellular data, and a rear-facing camera, but no NFC, while the Kindle Fire has a dual core processor, but no camera, no NFC, and no expandable memory. What this really means is that you can't just assume the Nexus 7 is a clone of any particular older device.

Given these hardware and software differences, the user expectations for each device are different. The Galaxy Tab experience was that of an over-sized phone. The Kindle Fire experience is that of a color e-book reader that can, "oh-by-the-way," do some apps. The Nexus 7 is ready for the latest 3D games and HD movies. The bottom line: As a developer, you need to recognize that the user who would buy a Nexus 7 is not the same type of user that will go get a Kindle Fire. The Nexus 7 caters to the bleeding edge but budget-minded Google-leaning type of user (perhaps the younger crowd). On the other hand, niche devices, such as the Kindle Fire, are often gifted to others at the holidays and cater to the audience who is more likely to want to read and maybe play a casual game of crossword than the latest games from EA or Gameloft.