I was surprised to find that I could type perfectly well on the iPad's virtual keyboard, after spending a little time convincing my fingertips to stop freaking out from the lack of tactile feedback.

Still, when you're relying on an iPad for real work, and you're hoping to leave your notebook behind as frequently as possible, you need a mechanical keyboard.

Here's another selling point of an easel stand: when your iPad can prop itself up at a comfortable viewing angle all on its own, there's no need to look any further than Apple's standard Wireless Keyboard. What are you looking for in a keyboard? You want something affordable that's small and sturdy enough to travel with. Done, done, and done. It's just $69, it's barely bigger than the bank of keys it holds, and it's made out of metal.

At the top of the feature list is "comfort," though. This is the same keyboard that Apple ships with its desktop Macs. It's the same size and has same keyswitch design. Writing on an iPad with this keyboard is no different from writing on an iMac or a MacBook. I can blur straight through writing projects at my maximum typing speed.

The iPad will work with any Bluetooth keyboard, of course. But I've never found one that matches the quality and value of Apple's. And while I'm...amused...by models that fold up into something the size of a deck of cards, they're much more expensive. Plus, I mean, you already let go of the "I'd like to carry everything in my pockets" dream when you bought the iPad, didn't you?

The Apple Wireless Keyboard is slick but bloody hell, I wish Apple hadn't been so damned stylish when they designed its power switch. If you don't take precautions, when you take your iPad and this keyboard out of your shoulder bag you'll discover that you've got far less battery power left than you thought. Every time the keyboard jostles in the bag, the iPad "hears" a keypress and wakes from sleep.

There's an easy workaround: just go into your iPad's General settings panel and switch "Bluetooth" to "Off" before you head out the door. But I still wish that Apple had just put a simple mechanical Off switch on the keyboard.

("What about Apple's iPad Keyboard Stand, Andy?" you ask. Yeah. It stinks. Its unwieldy shape defies you to even try taking it from one desk to another, and it forces you to use the iPad in portrait orientation. If you have your iPad in an easel case (and you should) then there's no reason to own one of these things.)

A Couple Of Rubber Stoppers

Is that trademarked? Oh, bother. No. I should trademark that. Because it's actually one of my favorite iPad stands.

I certainly prefer it to a purpose-made stand. Apple, and third-parties, make a phalanx of different desktop and bedside stands. I've tried a dozen of them and liked none of them. Most iPad users will keep their devices in some sort of case all the time, and few stands are designed to accommodate cases. If it's in a case, you don't need a stand, anyway.

Rubber Stoppers are the exception. And when I say "rubber stoppers" I mean, literally, you go to your local home center or hardware store and rummage through the parts aisle for a pair of thick black rubber stoppers. You can buy a pair of 1.5" stoppers for about six bucks and they're obviously way more portable than a conventional hard stand, at a fraction of the cost. 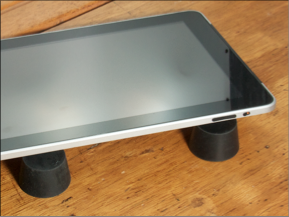 Some simple rubber stoppers, available at most hardware stores, can help keep your iPad from skittering about on a table.

Slide them under the far corners of your iPad and they'll keep it elevated at the perfect typing angle. The rubber grabs on to the back of the iPad and the table and prevents anything from sliding around. If you take a razor blade and cut a deep V-shaped groove into the tops, they'll also grab the bottom edge of the iPad and prevent it from falling flat when you're at a diner and want to lean it against something solid so you can read while you make your way through a chicken club.

One alternative keyboard merits a special shout-out: the Clamcase ($149 from www.clamcase.com).

It's a qualified shout-out, to be sure. The Clamcase turns your iPad into a netbook, more or less. It's a hard, hinged case with a mechanical keyboard at the bottom and a frame at the top which your iPad clicks into. 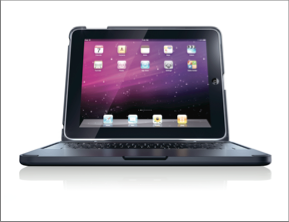 The Clamcase instantly turns your iPad into a laptop-like, easy-to-transport, computer.

But though the case makes the iPad a lot thicker, it doesn't increase its footprint. Hooray!

No, no...that's bad: it means that you'll have to make do with a miniaturized keyboard that's no wider than the iPad. So it won't be very comfortable to type on. I can actually type faster on the iPad's virtual keyboard than I can on keyboards of this size.

To recap: The Clamcase is more than twice as expensive as the Apple Wireless Keyboard, it makes your iPad bulky and ugly, and it's not a terribly comfortable thing to type on.

So why am I even mentioning it? Because it's the sole solution to the problem of using your iPad like a laptop. As in: typing with the iPad actually on your lap. I cover many events in which I have to take furious notes while sitting in a folding chair in an auditorium and while I vastly prefer the Apple Wireless keyboard, I've yet to hit upon a jury-rigged solution that'll let me type even a fraction as easily as I can on even the lamest conventional notebook computer.