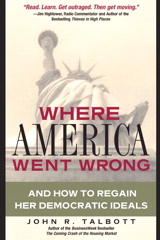 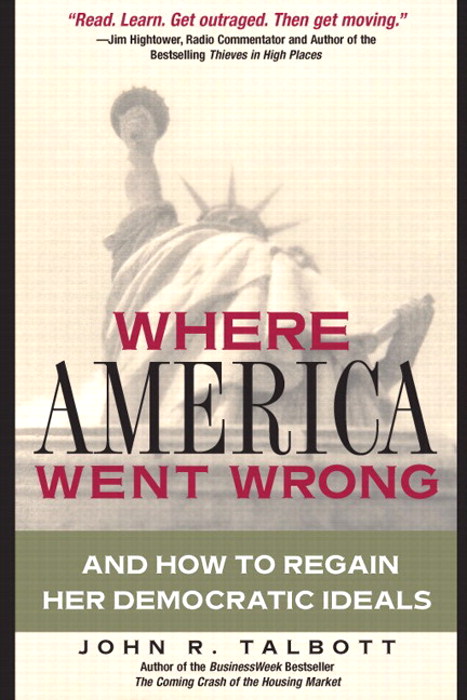 Where America Went Wrong: And How To Regain Her Democratic Ideals

“John Talbott’s call to revitalize American democracy also contains a powerful message for the rest of the world: namely, that democratic governance and the rule of law constitute the key to economic development. It’s a compelling message that deserves the widest possible hearing.”

“This is a fascinating and ambitious book. Not everybody will agree with the arguments. But I believe everybody will be challenged and stimulated by them.”

“Clearly written and told with passion and conviction, Where America Went Wrong lays before us a compelling picture of an America that is under siege by corporations, special interests, and the rich and powerful. It is our very future as a democracy that is at stake. The book deserves to be read by everyone who cares about America.”

While the symptoms indicate there is something fundamentally wrong with America, the remedy is very specific–we have lost our democratic tradition. The question for America no longer comes down to Democrats vs. Republicans or liberals vs. conservatives or free-market libertarians vs. anti-globalists, but rather to a simple formulation of the people vs. the elites. Some might argue that such delineation might initiate a class war. Wake up! The class war has already begun.

Something has gone terribly wrong in America. The bastion of democratic freedom in the world is ignoring its own democratic traditions at home and abroad, and the results are immediate and painful. World opinion of America has dropped precipitously. The world economy has stalled, especially in Africa and Latin America. Americans are consuming more and enjoying it less. The world is not at peace.

It is time for Americans and members of the world community who are unhappy to stand up and raise their voices. Elites, big corporations, and special interests have had their failed day in the sun, and now it is time to return America to its people.

The solution is democratic reform. Talbott shows how greater direct democracy can revitalize not just our politics, but our economy as well. Voting rights, constitutional rights, human rights, democratic institutions, a free press, civil liberties, and especially rights to assemble and speak are important not just in the world’s repressive regimes but also in America, which has seen a long erosion of these basic rights so important to her people’s prosperity and individual freedoms.

1. What Is Wrong with America?
2. Is It the Economy, Stupid?
3. Is Government the Problem?
4. Corporations Are Not Citizens!
5. How the Rich and Powerful Play the Game.
6. Other Special Interests Have Other Special Requirements.

7. Why Do They Hate Us? What World Opinion Could Tell America.
8. More Democracy Is the Answer.
9. What Should America's Message to the Developing World Be?


WHO WILL TELL THE PEOPLE.

10. Has Academia Lost Its Independence.
11. Who Controls the Media?

12. The Citizens' Agenda and Conclusion.

The Human Edge: How curiosity and creativity are your superpowers in the digital economy

The Rules of Thinking: A personal code to think yourself smarter, wiser and happier