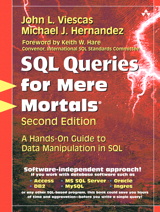 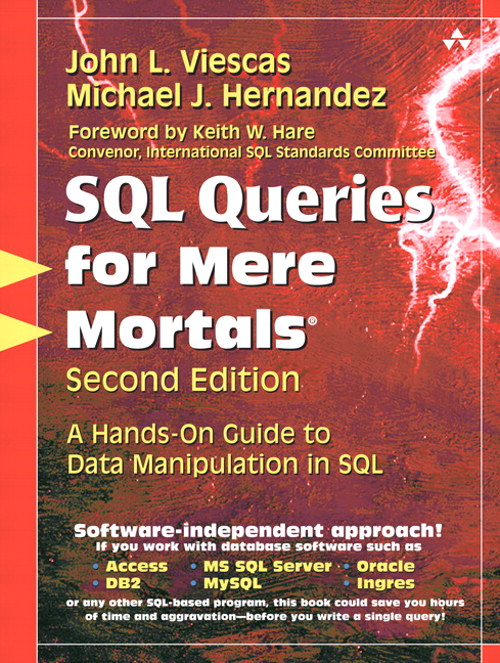 Unless you are working at a very advanced level, this is the only SQL book you will ever need. The authors have taken the mystery out of complex queries and explained principles and techniques with such clarity that a "Mere Mortal" will indeed be empowered to perform the superhuman. Do not walk past this book!
--Graham Mandeno, Database Consultant

I learned SQL primarily from the first edition of this book, and I am pleased to see a second edition of this book so that others can continue to benefit from its organized presentation of the language. Starting from how to design your tables so that SQL can be effective (a common problem for database beginners), and then continuing through the various aspects of SQL construction and capabilities, the reader can become a moderate expert upon completing the book and its samples. Learning how to convert a question in English into a meaningful SQL statement will greatly facilitate your mastery of the language. Numerous examples from real life will help you visualize how to use SQL to answer the questions about the data in your database. Just one of the "watch out for this trap" items will save you more than the cost of the book when you avoid that problem when writing your queries. I highly recommend this book if you want to tap the full potential of your database.
--Kenneth D. Snell, Ph.D., Database Designer/Programmer

I don't think they do this in public schools any more, and it is a shame, but do you remember in the seventh and eighth grades when you learned to diagram a sentence? Those of you who do may no longer remember how you did it, but all of you do write better sentences because of it. John Viescas and Mike Hernandez must have remembered because they take everyday English queries and literally translate them into SQL. This is an important book for all database designers. It takes the complexity of mathematical Set Theory and of First Order Predicate Logic, as outlined in E. F. Codd's original treatise on relational database design, and makes it easy for anyone to understand. If you want an elementary- through intermediate-level course on SQL, this is the one book that is a requirement, no matter how many others you buy.
--Arvin Meyer, MCP, MVP

Even in this day of wizards and code generators, successful database developers still require a sound knowledge of Structured Query Language (SQL, the standard language for communicating with most database systems). In this book, John and Mike do a marvelous job of making what's usually a dry and difficult subject come alive, presenting the material with humor in a logical manner, with plenty of relevant examples. I would say that this book should feature prominently in the collection on the bookshelf of all serious developers, except that I'm sure it'll get so much use that it won't spend much time on the shelf!
-- Doug Steele, Microsoft Access Developer and author

Over the last several decades, SQL has evolved from a language known only to computer specialists to a widely used international standard of the computer industry. The number of new applications deployed each year using SQL now totals in the millions. If you are accessing corporate information from the Internet or from an internal network, you are probably using SQL. This new edition of SQL Queries for Mere Mortals helps new users learn the foundations of SQL queries, and is an essential reference guide for intermediate and advanced users.

The accompanying CD contains five sample databases used for the example queries throughout the book in four different formats: Microsoft SQL Server 2000 and later, Microsoft Access 2000 and later, MySQL version 5.0 and later, and SQL scripts that can be used with most other implementations of the language.

Part I: Relational Databases and SQL 1

Chapter 1: What Is Relational? 3

Topics Covered in This Chapter 3
Types of Databases 3
A Brief History of the Relational Model 4
Anatomy of a Relational Database 6
What's in It for You? 15
Where Do You Go from Here? 16
Summary 17

Topics Covered in This Chapter 19
Why Is This Chapter Here? 19
Why Worry about Sound Structures? 20
Fine-Tuning Fields 21
Fine-Tuning Tables 30
Establishing Solid Relationships 42
Is That All? 50
Summary 51

Chapter 3: A Concise History of SQL 53

Topics Covered in This Chapter 53
The Origins of SQL 54
Early Vendor Implementations 55
". . . And Then There Was a Standard" 56
Evolution of the ANSI/ISO Standard 58
Commercial Implementations 64
What the Future Holds 65
Why Should You Learn SQL? 65
Summary 66

Topics Covered in This Chapter 71
Introducing SELECT 72
The SELECT Statement 73
A Quick Aside: Data versus Information 75
Translating Your Request into SQL 77
Eliminating Duplicate Rows 84
Sorting Information 87
Saving Your Work 92
Sample Statements 93
Summary 102
Problems for You to Solve 103

Chapter 5: Getting More Than Simple Columns 105

Topics Covered in This Chapter 105
What Is an Expression? 106
What Type of Data Are You Trying to Express? 107
Changing Data Types: The CAST Function 110
Specifying Explicit Values 112
Types of Expressions 117
Using Expressions in a SELECT Clause 128
That "Nothing" Value: Null 135
Sample Statements 139
Summary 147
Problems for You to Solve 149

Topics Covered in This Chapter 369
What Is a Subquery? 370
Subqueries as Column Expressions 372
Subqueries as Filters 377
Uses for Subqueries 392
Sample Statements 394
Summary 409
Problems for You to Solve 410