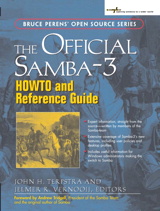 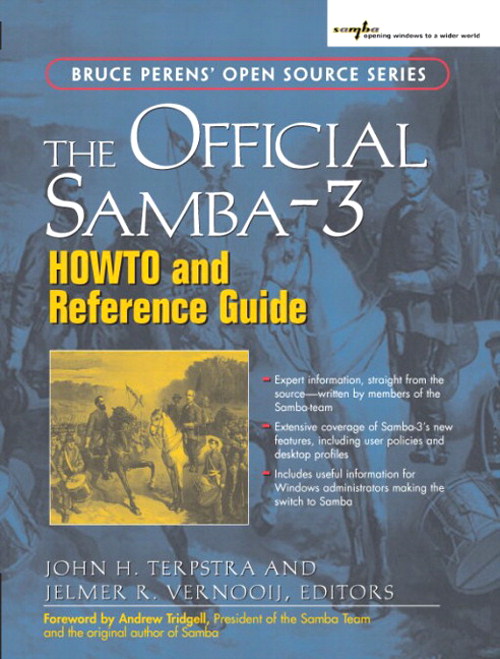 "The breadth of technical information provided in this book ensures that even the most demanding of administrators will find something they need."
--Andrew Tridgell, President of the Samba Team and the original author of Samba

The practical, authoritative, step-by-step guide to cutting IT costs with Samba-3!

This is the definitive guide to using Samba-3 in production environments. It begins with the immense amount of HOWTO information published by the Samba Team and volunteers around the world . . . but that's just the beginning. The book's Samba Team editors have organized and edited this material around the practical needs of working Windows(R) administrators. UNIX(R)/Linux administrators will find all the answers they need as well.

Whether you're deploying Samba for the first time, integrating Samba into a Windows 200x Active Directory environment, migrating from NT 4 or Samba 2.x, or using Samba in a UNIX/Linux environment, you'll find step-by-step solutions, carefully edited for accuracy, practicality, and clarity. You'll learn all you need to make intelligent deployment decisions, get running fast, and use Samba-3's powerful new features to maximize performance and minimize cost.

Step-by-step installation techniques and proven configurations that work "right out of the box."

Download The Official Samba-3 HOWTO and Reference Guide in PDF

Untitled Document To facilitate your work with the resources mentioned in the text, below please find links to some of the Web-based references mentioned throughout the book.

http://www.cups.org/ The Common UNIX Printing System ("CUPS") is a cross-platform printing solution for all UNIX environments.

http://www.kde.org/ KDE is a powerful Open Source graphical desktop environment for Unix workstations. It combines ease of use, contemporary functionality, and outstanding graphical design with the technological superiority of the Unix operating system

http://sourceforge.net/ SourceForge.net is the world's largest Open Source software development website, with the largest repository of Open Source code and applications available on the Internet.

http://www.linuxprinting.org/ LinuxPrinting.org provides resources to help with printing under free operating systems like GNU/Linux and the BSDs or under commercial UNIX-like systems such as Solaris and OS X.

1. How to Install and Test Samba.

20. Winbind: Use of Domain Accounts.


Features and Benefits. What Are Charsets and Unicode? Samba and Charsets. Conversion from Old Names. Japanese Charsets. Common Errors.


Planning and Getting Started. Migration Options.

37. SAMBA and Other CIFS Clients.

Untitled Document A man's gift makes room for him before great men. Gifts are like hooks that can catch hold of the mind taking it beyond the reach of forces that otherwise might constrain it. -- Anon.

This is a book about Samba. It is a tool, a derived work of the labors of many and of the diligence and goodwill of more than a few. This book contains material that has been contributed in a persistent belief that each of us can add value to our neighbors as well as to those who will follow us.

This book is designed to meet the needs of the Microsoft network administrator. UNIX administrators will benefit from this book also, though they may complain that it is hard to find the information they think they need. So if you are a Microsoft certified specialist, this book should meet your needs rather well. If you are a UNIX or Linux administrator, there is no need to feel badly you should have no difficulty finding answers to your current concerns also.

Samba is a big, complex project. The Samba project is ambitious and exciting. The team behind Samba is a group of some thirty individuals who are spread the world over and come from an interesting range of backgrounds. This team includes scientists, engineers, programmers, business people, and students.

Team members were drawn into active participation through the desire to help deliver an exciting level of transparent interoperability between Microsoft Windows and the non-Microsoft information technology world.

The slogan that unites the efforts behind the Samba project says: Samba, Opening Windows to a Wider World! The goal behind the project is one of removing barriers to interoperability.

Samba provides file and print services for Microsoft Windows clients. These services may be hosted off any TCP/IP-enabled platform. The original deployment platforms were UNIX and Linux, though today it is in common use across a broad variety of systems.

The Samba project includes not only an impressive feature set in file and print serving capabilities, but has been extended to include client functionality, utilities to ease migration to Samba, tools to aid interoperability with Microsoft Windows, and adminstration tools.

The real people behind Samba are users like you. You have inspired the developers (the Samba Team) to do more than any of them imagined could or should be done. User feedback drives Samba development. Samba-3 in particular incorporates a huge amount of work done as a result of user requests, suggestions and direct code contributions.

There is admittedly a large number of Samba books on the market today and each book has its place. Despite the apparent plethora of books, Samba as a project continues to receive much criticism for failing to provide sufficient documentation. Samba is also criticized for being too complex and too difficult to configure. In many ways this is evidence of the success of Samba as there would be no complaints if it was not successful.

The Samba Team members work predominantly with UNIX and Linux, so it is hardly surprising that existing Samba documentation should reflect that orientation. The original HOWTO text documents were intended to provide some tips, a few golden nuggets, and if they helped anyone then that was just wonderful. But the HOWTOs lacked structure and context. They were isolated snapshots of information that were written to pass information on to someone else who might benefit. They reflected a need to transmit more information that could be conveniently put into manual pages.

The original HOWTO documents were written by different authors. Most HOWTO documents are the result of feedback and contributions from numerous authors. In this book we took care to preserve as much original content as possible. As you read this book you will note that chapters were written by multiple authors, each of whom has his own style. This demonstrates the nature of the Open Source software development process.

Those of you who have dedicated your labors to the production of unofficial HOWTOs, to Web page information regarding Samba, or to answering questions on the mailing lists or elsewhere, may be aware that this is a labor of love. We would like to know about your contribution and willingly receive the precious perls of wisdom you have collected. Please email your contribution to John H. Terpstra (jht@samba.org).

As a service to other users we will gladly adopt material that is technically accurate.

Existing Samba books are largely addressed to the UNIX administrator. From the perspective of this target group the existing books serve an adequate purpose, with one exception - now that Samba-3 is out they need to be updated!

This book, the Official Samba-3 HOWTO and Reference Guide, includes the Samba-HOWTO-Collection.pdf that ships with Samba. These documents have been written with a new design intent and purpose.

This book is presented in six parts:

Designed to help you get Samba-3 running quickly. The Fast Start chapter is a direct response to requests from Microsoft network administrators for some sample configurations that just work.

The purpose of this section is to aid the transition from existing Microsoft Windows network knowledge to Samba terminology and norms. The chapters in this part each cover the installation of one type of Samba server.

The mechanics of network browsing have long been the Achilles heel of all Microsoft Windows users. Samba-3 introduces new user and machine account management facilities, a new way to map UNIX groups and Windows groups, Interdomain trusts, new loadable file system drivers (VFS), and more. New with this document is expanded printing documentation, as well as a wealth of information regarding desktop and user policy handling, use of desktop profiles, and techniques for enhanced network integration. This section makes up the core of the book. Read and enjoy.

A much requested addition to the book is information on how to migrate from Microsoft Windows NT4 to Samba-3, as well as an overview of what the issues are when moving from Samba-2.x to Samba-3.

This short section should help you when all else fails.

Here you will find a collection of things that are either too peripheral for most users, or are a little left of field to be included in the main body of information.

Welcome to Samba-3 and the first published document to help you and your users to enjoy a whole new world of interoperability between Microsoft Windows and the rest of the world.