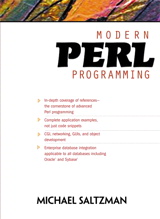 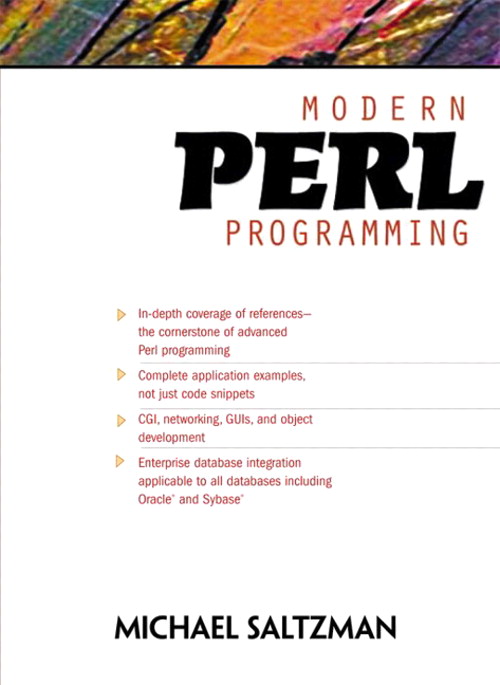 Supercharged Perl programming for every developer, sysadmin, and Web professional.

Modern Perl Programming will help you master Perl's most robust, powerful features—so you can make the most of the language whether you're a beginner or an experienced scripter. Michael Saltzman starts with a rapid-fire Perl tutorial and refresher. Then, using actual applications—not just code snippets—he presents expert guidance on the Perl features that deliver the most power, productivity, and efficiency.

The file labfiles.zip contains the EXAMPLES and SOLUTIONS directories in a zip archive.


Why program in Perl?


Why did I write this book?


Who should read this book?


Overview of the Book.


1. A Tutorial Introduction to Perl.

2. Input and Output in Perl.

Welcome to the world of Perl programming. I know that few of you enjoy reading the preface, but it may help to at least browse through it to make the reading of the actual text a little easier. In this section I will tell you a little about Perl and a lot about conventions used in this book. But first, I have a few questions to answer.

Perl is a programming language that was created by Larry Wall in the early 1980s. The language has gained widespread popularity over the last few decades. In the beginning, Perl was used by a small group of Unix system administrators who needed a language, superior to the Unix shell, to do various system administration tasks. With the exponential growth of the Internet and the popularity of the World Wide Web's Common Gateway Interface (CGI) programming paradigm, the number of Perl programmers has also grown exponentially.

Why program in Perl?

Being familiar with many programming languages, I'm in a good position to judge them. I have had my favorite languages throughout the years: Fortran, PL/1, C, C++, Java, and of course, Perl. Too many people argue about which language is the best. No language can be all things to all people. Each language has its strengths and weaknesses. However, no language that I know has the expressive capability and ease of use of Perl. You, of course, can decide for yourself when you finish reading this book.

Why did I write this book?

I have been an instructor of computer programming languages for more than three decades. In that time, I have had the occasion to learn many languages. My typical approach would be to buy a book on the subject, plow through it, and write as many programs as I could to test out various features of the language.

I'm very critical of textbooks. Most of the textbooks that I've read never seem to be at the correct level. Half of them seemed too elementary; the other half seemed too advanced. I always wanted one that was right in the middle. I've tried to write this book for the intermediate audience because I think I can save people in that category a lot of time and research.

Who should read this book?

This is a book about Perl programming, so anybody who is interested in writing Perl programs should read this book. Since Perl is a programming language, you would think this means only programmers should read it. Currently, however, there is a blur over who is a programmer. Many Web-sters who maintain Web pages also write CGI scripts. System administrators need to write scripts to support users. Managers periodically want to write scripts to create reports for various staff members above and below them in the corporate hierarchy. All these groups would profit from reading this book.

Overview of the Book

The book is organized in three sections: beginning, intermediate, and advanced. In the beginning section, you will see topics such as: input and output, operators, arrays, control structures, and data types. In the intermediate section, you will see topics such as: associative arrays, regular expressions, subroutines, report writing, and accessing system resources. The advanced section includes topics such as: references, object-oriented programming, client/server programming, CGI programming, graphical user interfaces (GUIs) with the Tk module, accessing real databases in Perl, and debugging.

— demonstrates many fundamental Perl features so that you can start writing Perl programs quickly. Subsequent chapters will drill more deeply into each of the topics presented here.

— looks more deeply into reading and writing files. Some of Perl's operators for determining the type of a file are explored. Finally, this chapter looks at how you can determine information about files.

— examines the Perl operators. A Perl expression is a syntactically correct combination of operators and operands. Perl has a plethora of operators. Many of them originated with the C language and some of them are particular to Perl. In this chapter, we will explore all of the operators, including those used for bit manipulation, string manipulation, and regular expressions.

— takes an in-depth look at arrays in Perl. All programming languages use arrays heavily and Perl is no exception. However, you will see that Perl arrays are dynamic and are supported by a wide variety of functions. We will take a look at some of the nice features of Perl arrays. Finally, we will look at many of the more common array functions used by Perl programmers.

— looks at a common scenario in programming languages: paired data. Associative arrays, also called hashes, provide an efficient way to search for values by their keys. In this chapter, we will show how hashes may be used to efficiently solve a wide variety of commonly encountered problems.

— refers to patterns that are expressed with characters armed with special meanings. These patterns may be compared to strings to see if the strings match the patterns. These regular expressions make it easy for Perl to validate data, make substitutions, or pick out portions of a match.

— reveals the many system calls that are available via Perl. There is a strong Unix flavor to these functions. However, many of them have been implemented on Windows so that they have a consistent behavior regardless of the operating system.

— moves the reader along into slightly advanced concepts. This chapter concentrates on a thorough treatment of references, Perl's version of pointers. References are used for almost all advanced Perl topics.

— gives the details on how to write Perl programs that use objects and methods. This important chapter is the basis of many of the Perl modules found at various Perl repositories on the Internet.

— explores the possibilities of writing network applications with Perl. After reviewing some networking fundamentals, we'll give some examples of writing clients that connect to real servers. Then we will write a few servers of our own.

— explores the topics of writing back-end programs invoked by Web servers to process front-end fill-in forms. This style of programming, called CGI scripting, is largely responsible for the exponential growth of Perl.

— gives a great many details about writing GUIs in Perl using the Tk.pm module. This is a great undertaking as this is a vast body of knowledge. This chapter demonstrates many Tk capabilities, but at a high level. All the methods in this section take many options. We will only show a few for each and leave the rest for a book that specializes in writing GUIs in Perl using the Tk module. Our approach in this section will be to introduce a few widgets and build a program in pieces. At the conclusion of this section, we will have built a GUI with an application behind it.

— shows how to integrate SQL commands within your Perl scripts so that real databases may be accessed. To remain vendor-neutral, we will use the MySQL database, which can be downloaded at www.mysql.com. With this database, we will demonstrate the principles of accessing all databases in Perl, regardless of whether the actual database is Oracle, Sybase, Access, etc.

— explores many of the possibilities of debugging your Perl code. Debugging a piece of software is a difficult task in any programming language. Since Perl is so permissive, there is much room for error. This chapter shows many techniques for finding errors, including the use of the Perl debugger itself.

Perl programs run in many environments, though the two major operating systems in the marketplace of 2002 are Unix and Windows (and their variants). As you will see, there is a slight difference between executing a Perl program in these two environments. To normalize the way a Perl program is executed in this book, we will always use the % symbol as the system prompt. If you are using Unix, the first line of every script needs to be:

where the first two characters are #! and the rest of the line is the complete pathname for the Perl executable. We used /usr/bin/perl, where it is located on Linux, but it may be different on your system.

We will simply give the name of a Perl program to execute it, although on Windows, you'll need to put the word "perl" in front of the executable file. On Unix, you will want to make each file executable by using the chmod command. We will not show the chmod command being executed each time. We will simply show the execution of Perl scripts as follows:

In the Perl world, there is no restriction on the naming of Perl executable files. Despite this lack of restriction, we will always name our example scripts with the .pl extension.

If you are a Unix user, you are familiar with the newline character. It is generated when the user presses the Return (or Enter) key. Perl scripts honor this convention regardless of the operating system.

In writing a book about a programming language, the author is faced with many different decisions. Since this book contains many complete code examples, I must show you the code and explain it. This leads to two inevitable choices: show the code and then write about it, or write about it and then show the code. There are drawbacks and advantages to each choice. For the most part, I have given the code first and then given the explanation. When you become frustrated reading some of the code, have a little patience, for the explanation will surely follow.

All of the code that comprises the examples in this book may be found online and can be downloaded. In addition, each chapter has some exercises that support the topics in the chapters. These solutions can also be found online at http://www.phptr.com/saltzman/