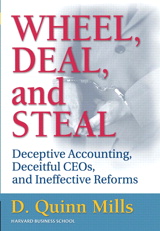 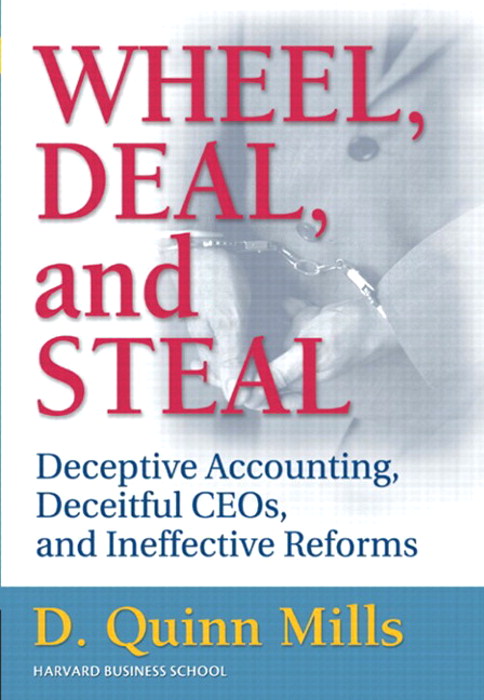 Global financial scandals didn't stop with Enron, WorldCom, or Tyco. In fact, they're still notover. In Wheel, Deal, and Steal, Harvard Business School professor Daniel Quinn Mills showsinvestors how imperial CEOs continue to steal from their investors - and how the rules intendedto protect investors continue to fail. Mills outlines comprehensive reforms to clean up the systemand keep it clean. Best of all, he shows small investors how to protect what's left - and maybeeven recover their losses.


I. WHAT HAPPENED TO INVESTORS' MONEY?

1. Why You Should Read This Book.


Investors Aren't Primarily to Blame for Their Losses. Power Is at the Root of the Corporate Financial Scandals. The Internet Bubble and The Big Company Scandals. The Decay of American Capitalism. Returning to a More Honest America.


The Scandals in a Nutshell. Why We Didn't See This Coming.


What Was Going On? Corrupt Accounting. Restatements. CEOs Ask for Misrepresentation. Hiding Relative Importance. Just Like the Others. The Common Accounting Dodges. SEC Oversight. The Criminal Mind.

4. More Than a Few Bad Apples.


A Lot of Dirty Little Piggies. Bad Actors but No Scandals. Few Prosecutions Doesn't Mean Few Violations. Investors Made Too Little, and CEOs Too Much. Changes in CEOs' Attitudes Led to a Decline in Investors' Trust. Business Isn't Only to Blame. Not a Great Depression-Yet. The American Economic System Is Not Broken. The Business System as a Whole Is Not Broken. Conflicts of Interest: The Core of the Problem in the Securities Industry. Awards for “the Best” in Corporate America.

II. INFECTIOUS GREED: WHO GOT THE MONEY?

5. Shareholders versus CEOs: The CEOs Make It Big.


CEOs Made Fortunes without Building Companies. Aligning CEO and Investor Interests. Stock Options Begin to Dominate CEOs' Pay Packages. Behind the Executive Pay Explosion. Why Options Pay Off When Companies Don't. Stock Options and the Link to Performance. Shareholder-CEO Alignment in Tatters. Is Alignment of CEO and Shareholder Interests Possible?

6. Osama Bin Andersen: The Role of the Accountants.

III. THE FAILURE OF CHECKS AND BALANCES.

7. Neither Prevent nor Punish.


Rubber Stamps—Boards of Directors. Protection for Deception: The Role of the Attorneys. The Failure of the Regulators. What the Prosecutors, Courts, and the SEC Didn't Do. What the Fed Didn't Do.

8. Ordinary Business at the Banks.


Conniving with Corporations to Deceive Investors. Greasing the CEO's Palm via IPO Allocations.

9. The Corruption of the Analysts.


Use It or Lose It. May Day. Maybe 20 Percent Are Honest. What's Said Isn't What's Done. Actual and Potential Clients. The Language of Recommendations. Efforts at Reform. Independent Analysts. Praise (or Rebuke) for Pay. Stealth Marketing.

IV. WHY IT HAPPENED.

10. The Temptation to Steal.


The New Very Rich: CEOs. How CEOs Get Rich. The Ignorant CEO. So Strong a Temptation. The Crucial Importance of Leadership. The Courage to Speak Out.


Do What's Right: Why Ethics Are Very Important. What Are Ethics? The Failure of Ethics Programs in Companies. The Decline of American Ethics and How it Happened. The “Push the Limits” Environment. Hamstringing Ethics in America. The Role of the Business Schools.


What To Do about CEO Compensation. A Critical Change Needed in Federal Tax Law. Boards of Directors versus the CEO in Setting Pay Packages. The CEOnistas—A Parody.


American CEOs Have Too Much Power for the Safety of American Investors. Proposals to Strengthen Corporate Boards. Increased Shareholder Activism. America's Imperial CEOs. The Danger of Ineffective Reforms. Power Struggle: What Will Happen with Governance Reforms if the Imperial CEO Retains His or Her Power. America's Leadership Paradigm Is Upside Down. We Don't Have to Have Imperial CEOs. Reining in the CEO.

VI. THE MARKET'S ROLE IN A SOLUTION.


Limitations of the Market. Freeing the Market from Ideological Constraints. Trusting the Imperial CEO Again. Finding a Market Solution in the Not-for-Profit World. Relying on the Market to Reform the Securities Industry. Comments of Fed Chairman Alan Greenspan on the Corporate Financial Scandals.

16. Ethics Can Make the Market Work.

VII. GETTING YOUR MONEY BACK.

17. Freezing and Seizing: A Direct Route to the CEO's Pocketbook.


Three Routes to the Money. Getting the Company to Sue for You. Appropriate Limitations. Filing a Claim against Your Broker. Going Directly to the Courts. Can Investors Get the Law Enforced? What Happened to Chainsaw Al. Proving that CEOs Were at Fault. Getting Money if You Win the Suit.

18. Getting Congress to Get it for You.


Taking Money from Perpetrators and Giving It to Victims. Idle Redress—Excessive Legalism.

VIII. PROTECTING YOURSELF FROM NEW DANGERS.


The Next Big Thing—The Fund of Funds. Hedge Funds.

21. Do Investors Dare Return to the Market?


A Bear Market, Yes, but Not Only a Bear Market. Diagrammatic Summaries of CEO and Investor Conflict in the Securities Markets. The Temptation Remains. It's Still Going On. Reform, Justice, and Restitution. The Irony of the Investor as a Victim of American Capitalism. The Trembling Foundations of Wall Street. Sources of Investor Risk. American Investment Markets without Investors. Key Ideas of This Book.

The Rise of the Rogue Executive: How Good Companies Go Bad and How to Stop the Destruction