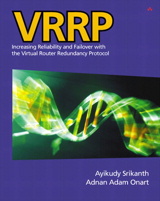 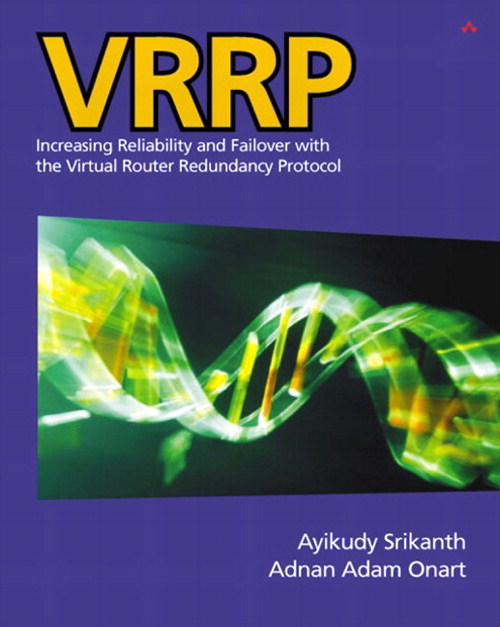 "A detailed and clearly written book that is an invaluable resource to all VRRP users and implementers."
--Scott Bradner, Senior Technical Consultant, Harvard University

By employing the Virtual Router Redundancy Protocol (VRRP), administrators can ensure that their networks remain up and running, thereby eliminating expensive downtime. Using VRRP to avoid network outages is essential to building accessible, robust networks, and central to the implementation of successful disaster recovery models. Written by experts who contributed to the design of the VRRP protocol and participated actively in its deployment, VRRP: Increasing Reliability and Failover with the Virtual Router Redundancy Protocol is your best introduction to this powerful high-availability tool.

VRRP examines the general characteristics of the protocol and its usage. The emphasis is on translating the protocol specification into a tutorial form ideal for day-to-day users of VRRP. In addition to introducing the technology, this book provides an in-depth analysis, featuring extensive material on configuring, managing, and troubleshooting VRRP. Precursors to this protocol, such as Cisco's HSRP and DEC's IPSTP, are also discussed. Various vendor-specific extensions to VRRP--and their use in solving specific high-availability problems not addressed by VRRP--are also examined.

Network administrators and managers, protocol implementers, practicing professionals, researchers, and students exploring the area of high availability will gain a solid understanding of the core concepts of reliability and redundancy based on VRRP, as well as the particulars of the VRRP protocol and how to implement it.

The appendixes provide the necessary background for networking and TCP/IP, the full text of VRRP MIB, a study of actual VRRP implementations and an analysis of public-domain software available for VRRP over Linux, an overview of the VRRP state machine using SDL flowcharts and UML diagrams, and an analysis of the protocol through formal logic.


I. VRRP IN PERSPECTIVE.


The Case for VRRP.

A Few Words About Router Virtuality.

II. A CLOSER LOOK AT VRRP.

A Closer Look at the VRRP Operations Table.

IV. VRRP: PAST AND FUTURE.

Future of VRRP: VRRP and IPv6.

Future of High Availability: Clustering and Beyond.

Appendix A. Networking and TCP/IP Overview.

Appendix E. VRRP from a Logical Point of View.

Logical Laws and Equivalences Used in the Discussions.

About Our Formal Perspective.

With the explosion of the Internet, computers have become ubiquitous and the networks to connect them have become as pervasive and as critical as a telephone connection. Many businesses depend on their networks to conduct their day-to-day operations, to offer their services and often times to sell their products. Further, the global reach of the Internet crossing language and geographic barriers has resulted in businesses needing to be open to serve one part of the world while the other part sleeps. Consequently, it has become critical for networks to be up and available 24 hours a day, seven days a week to serve a global customer base.

Network failures result in losses of hundreds of millions of dollars to businesses each year. These network failures can happen as a result of failure of a single network device or because of a disaster striking the area where the key network devices are housed. According to a study by a major analyst group, the network outages may cost a business up to $200,000 per minute. The stakes may even be higher than the monetary damage. Here is a good way to relate to the impact of unavailability: A user may be satisfied with 99.9% availability of his network. But 0.1% unavailability can be very damaging in other contexts. The following list highlights the potential impact if the availability was only 99.9%:

Scary, isn't it? A very convincing argument for taking network availability seriously since it may very well be the foundation for any one of the listed situations.

For the Internet to preserve its vital status for the business, every part of the Internet needs to be robust and every network attached to the Internet must be reachable at all times. As a result, high availability, redundancy, traffic sharing and disaster recovery have become major concerns, a high priority for network professionals determined to build accessible, robust networks

There are several aspects to building a robust and reliable network that can survive a large-scale disaster, component, link, and device failures. One important technique in achieving this goal has been to build networks with redundant physical components and associated protocols that let the components, appear as a single entity to the rest of the network while sharing the network traffic load. Virtual Router Redundancy Protocol (VRRP) is such a protocol that enables multiple physical routers to appear as a single entity to the hosts on the network even when they are physically away from each other, thereby avoiding loss of network availability in case of disaster or a router failure and removing the need for cumbersome reconfiguration of hosts.

OBJECTIVES OF THE BOOK

This book presents VRRP, one of the instruments in the toolkit of a network administrator used for dealing with certain aspects of network availability, disaster recovery and redundancy, namely the challenges of keeping the network services available to the hosts attached to a LAN during times of network failures. The book gives an overview of VRRP by discussing a series of configuration examples and deployment scenarios and describing the specific details of protocol implementation for various types of LAN technologies. The main objectives of the book are as follows:

ORGANIZATION OF THE BOOK

The book is organized into four parts: Introduction and VRRP overview; Detailed Analysis of VRRP; Configuring, managing, and troubleshooting VRRP; and VRRP Precursors, Extensions and Futures. The book has an additional Appendix section.

Network Administrators and managers: This book gives an overview of high availability issues and how VRRP specifically contributes to ensuring high availability in the LAN segment. This book contains numerous examples of network configurations using VRRP and ways in which to monitor and debug VRRP. The book further illustrates various practical network configurations, issues, and gotchas with manageability. It provides GUI and CLI configuration examples of various vendors of VRRP that the reader can use right away. This book also highlights the problems that are not solved by VRRP, thereby creating awareness for the need for other tools to complement this protocol.
Target Sections: Part I, Part III, and Part IV with Part II and Appendix II as reference material. Appendix A would be useful as refresher material.
Protocol Implementers: This book details the innards of the VRRP RFC by using different representational techniques such as state machines, SDL flow charts, and UML sequence diagrams for easy understanding of the protocol. It points out critical design issues that development engineers may encounter while implementing the protocol. The Appendixes further explain the formal aspects of the protocol for the expert reader and contains concise background material on SDL and UML. A public domain VRRP implementation is also discussed in detail with a detailed walk through of the source code.
Target Sections: Part I, Part II, and Part IV, Appendices B, C, D, and F with Chapter 7 as reference material.
Students, Researchers, and Professionals exploring the area of High Availability: With its full set of appendices, this book is fairly self contained, encompassing an overview section of basic TCP/IP concepts required for understanding VRRP and providing a detailed and simple explanation of VRRP in its overview chapters.
Target Sections: Entire book starting with Appendices as needed.