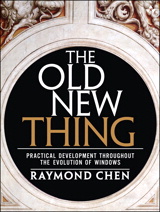 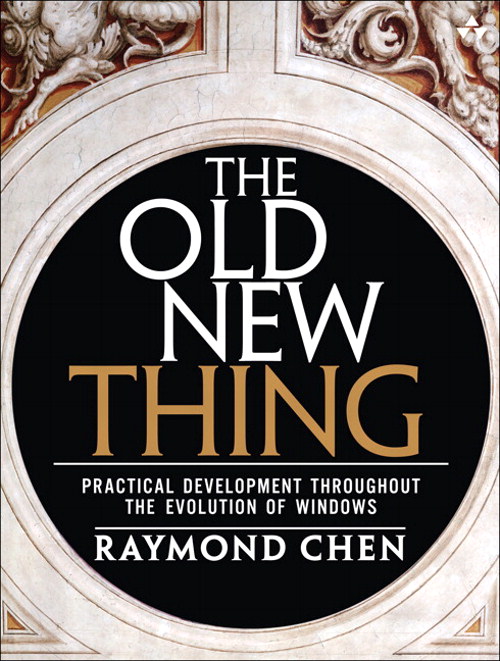 Old New Thing: Practical Development Throughout the Evolution of Windows, The

"Raymond Chen is the original raconteur of Windows."

"Raymond has been at Microsoft for many years and has seen many nuances of Windows that others could only ever hope to get a glimpse of. With this book, Raymond shares his knowledge, experience, and anecdotal stories, allowing all of us to get a better understanding of the operating system that affects millions of people every day. This book has something for everyone, is a casual read, and I highly recommend it!"

"Very interesting read. Raymond tells the inside story of why Windows is the way it is."

"Absolutely essential reading for understanding the history of Windows, its intricacies and quirks, and why they came about."

"Raymond Chen has become something of a legend in the software industry, and in this book you'll discover why. From his high-level reminiscences on the design of the Windows Start button to his low-level discussions of GlobalAlloc that only your inner-geek could love, The Old New Thing is a captivating collection of anecdotes that will help you to truly appreciate the difficulty inherent in designing and writing quality software."

Why does Windows work the way it does? Why is Shut Down on the Start menu? (And why is there a Start button, anyway?) How can I tap into the dialog loop? Why does the GetWindowText function behave so strangely? Why are registry files called "hives"?

Many of Windows' quirks have perfectly logical explanations, rooted in history. Understand them, and you'll be more productive and a lot less frustrated. Raymond Chen--who's spent more than a decade on Microsoft's Windows development team--reveals the "hidden Windows" you need to know.

Chen's engaging style, deep insight, and thoughtful humor have made him one of the world's premier technology bloggers. Here he brings together behind-the-scenes explanations, invaluable technical advice, and illuminating anecdotes that bring Windows to life--and help you make the most of it.

A few of the things you'll find inside:

Why do you have to click the Start button to shut down? 1

Why doesn't Windows have an "expert mode"? 2

The default answer to every dialog box is Cancel 3

The best setting is the one you don't even sense, but it's there, and it works the way you expect 6

In order to demonstrate our superior intellect, we will now ask you a question you cannot answer 7

Why doesn't Setup ask you if you want to keep newer versions of operating system files? 7

Thinking through a feature 9

When do you disable an option, and when do you remove it? 12

The evolution of mascara in Windows UI 16

Why isn't my time zone highlighted on the world map? 19

Why did Windows 95 have functions called BEAR, BUNNY, and PIGLET? 22

What was in the Windows 95 Special Edition box? 25

Windows brings out the Rorschach test in everyone 25

Why a really large dictionary is not a good thing 27

An insight into the Windows 95 startup sound 27

Why does the System Properties page round the memory size? 29

Why does my hard drive light flash every few seconds? 29

The hunt for a faster syscall trap 30

One byte used to cost a dollar 31

Each product-support call costs a sale 32

Why isn't Tweak UI included on the Windows CD? 32

Turns out that you can't install Windows via xcopy 34

The history of the Windows PowerToys 35

How did Windows choose its final build numbers? 38

Why doesn't the build number increment for service packs? 39

How windows manage their text 41

Can you give an example where this makes a difference? 44

Why are the rules for GetWindowText so weird? 44

Why do some people call the taskbar the "tray"? 47

Why does the taskbar default to the bottom of the screen? 49

Why doesn't the clock in the taskbar display seconds? 50

Why doesn't the taskbar show an analog clock? 51

When I dock my taskbar vertically, why does the word "Start" disappear? 52

Why don't notification icons get a message when the user clicks the "X" button? 52

What are those little overlay icons? 53

Why are these unwanted files/folders opening when I log on? 54

What do the text label colors mean for files? 56

Why does my advanced options dialog say ON and OFF after every option? 57

What determines the order in which icons appear in the Alt+Tab list? 58

Why is the read-only property for folders so strange? 59

What's with those blank taskbar buttons that go away when I click on them? 59

What is the difference between Minimize All and Show Desktop? 60 What does boldface on a menu mean? 62

Where do those customized Web site icons come from? 62

Where did my task manager tabs and buttons go? 63

Will dragging a file result in a move or a copy? 64

Why does the Links folder keep re-creating itself? 65

Why are documents printed out of order when you multiselect and choose Print? 66

Blow the dust out of the connector 68

How much is that gigabyte in the window? 69

Why can't I remove the "For test/evaluation purposes only" tag? 70

Chapter Six: A History of the GlobalAlloc Function

A peek at the implementation 76

Getting a custom right-click menu for the caption icon 85

When does the window manager destroy menus automatically? 88

Painting only when your window is visible onscreen 89

Determining whether your window is covered 93

Displaying a string without those ugly boxes 103

An auto-reset event is just a stupid semaphore 112

Why do I get spurious WM_MOUSEMOVE messages? 115

Why is there no WM_MOUSEENTER message? 118

What's so special about the desktop window? 120

The correct order for disabling and enabling windows 121

A subtlety in restoring the previous window position 122

The WM_QUIT message and modality 126

The importance of setting the correct owner for modal UI 129

Interacting with a program that has gone modal 132

A timed MessageBox, the cheap version 133

The bonus window bytes at GWLP_USERDATA 136

A timed MessageBox, the better version 136

Why does my window receive messages after it has been destroyed? 139

When vendors insult themselves 144

There's an awful lot of overclocking out there 148

Chapter Ten: The Inner Workings of the Dialog Manager

On the dialog procedure 151

The evolution of dialog templates 163

How dialogs are created 197

Why do dialog editors start assigning control IDs with 100? 225

Why is the X button disabled on my message box? 237

Why daylight saving time is nonintuitive 239

Why do timestamps change when I copy files to a floppy? 241

You can read a contract from the other side 245

The battle between pragmatism and purity 249

Don't save anything you can recalculate 254

Performance gains at the cost of other components 255

Do you know when your destructors run? 267

The layout of a COM object 272

When programs grovel into undocumented structures 284

Why not just block the applications that rely on undocumented behavior? 286

What's the deal with those reserved filenames such as NUL and CON? 290

Why is a drive letter permitted in front of UNC paths (sometimes)? 292

Do not underestimate the power of the game Deer Hunter 293

Sometimes the bug isn't apparent until late in the game 293

The long and sad story of the Shell Folders key 294

When programs patch the operating system and mess up 299

The compatibility constraints of even your internal bookkeeping 300

Why does Windows keep your BIOS clock on local time? 301

The ways people mess up IUnknown::QueryInterface 303

When programs assume that the system will never change, Episode 1 305

When programs assume that the system will never change, Episode 2 306

What do the letters W and L stand for in WPARAM and LPARAM? 311

Why was nine the maximum number of monitors in Windows 98? 312

Why is a registry file called a hive? 312

The management of memory for resources in 16-bit Windows 312

What was the purpose of the hPrevInstance parameter to WinMain? 316

What was the difference between LocalAlloc and GlobalAlloc? 318

What was the point of the GMEM_SHARE flag? 320

Why do I sometimes see redundant casts before casting to LPARAM? 321

Why do the names of the registry functions randomly end in Ex? 322

Why are HANDLE return values so inconsistent? 331

Why is the line terminator CR+LF? 334

When you change the insides, nobody notices 336

If FlushInstructionCache doesn't do anything, why do you have to call it? 337

If InitCommonControls doesn't do anything, why do you have to call it? 338

Why did InterlockedIncrement/Decrement only return the sign of the result? 339

Why does the function WSASetLastError exist? 340

Why are there broadcast-based mechanisms in Windows? 340

Where did windows minimize to before the taskbar was invented? 341

Why didn't the desktop window shrink to exclude the taskbar? 343

Why does the caret stop blinking when I tap the Alt key? 343

What is the deal with the ES_OEMCONVERT flag? 345

The story behind file system tunneling 346

Why do NTFS and Explorer disagree on filename sorting? 347

The Date/Time Control Panel is not a calendar 350

Why do up-down controls have the arrows backward? 354

Chapter Fifteen: How Window Messages Are Delivered and Retrieved

The life of a sent message 363

The life of a posted message 364

When does SendMessageCallback call you back? 368

What happens in SendMessageTimeout when a message times out? 369

Applying what you've learned to some message processing myths 370

How can you tell who sent or posted you a message? 371

Case mapping on Unicode is hard 373

An anecdote about improper case mapping 374

Keep your eye on the code page 379

Why is the default console codepage called "OEM"? 388

Why is the OEM code page often called ANSI? 389

Your debugging code can be a security hole 397

Why shared sections are a security hole 398

Why doesn't the new Start menu use Intellimenus in the All Programs list? 403

Why does Explorer eject the CD after you finish burning it? 408

Why does Windows setup lay down a new boot sector? 409

Psychic debugging: Why your expensive four-processor machine is ignoring three of its processors 410

Psychic debugging: Why your CPU usage is hovering at 50% 411

What's the deal with the DS_SHELLFONT flag? 412

What other effects does DS_SHELLFONT have on property sheet pages? 414

Why does Win32 fail a module load if an import could not be resolved? 417

Why are structure sizes checked strictly? 418

Why do I have to return this goofy value for WM_DEVICECHANGE? 421

The arms race between programs and users 422

Why can't you trap TerminateProcess? 424

Why do some processes stay in Task Manager after they've been killed? 424

Understanding the consequences of WAIT_ABANDONED 425

Why can't I put hyperlinks in notification icon balloon tips? 427

Why can't I use the same tree item multiple times? 429

When should you use a sunken client area? 432

Why is there no all-encompassing superset version of Windows? 433

Why is it even possible to disable the desktop, anyway? 433

What are the window and menu nesting limits? 435

My Documents vs. Application Data 450

Displaying your pop-up windows in the right place 471

Watch out for those sample URLs 483

But I have Visual Basic Professional 485

It's all about the translucent plastic 485

You can't escape those AOL CDs 487

Giving fair warning before plugging in your computer 487

There's something about Rat Poker 489

Be careful what you name your product group 490

The psychology of naming your internal distribution lists 490

Differences between managers and programmers 491

When a token changes its meaning midstream 492

Whimsical embarrassment as a gentle form of reprimand 493

Using a physical object as a reminder 494