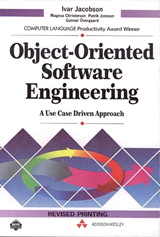 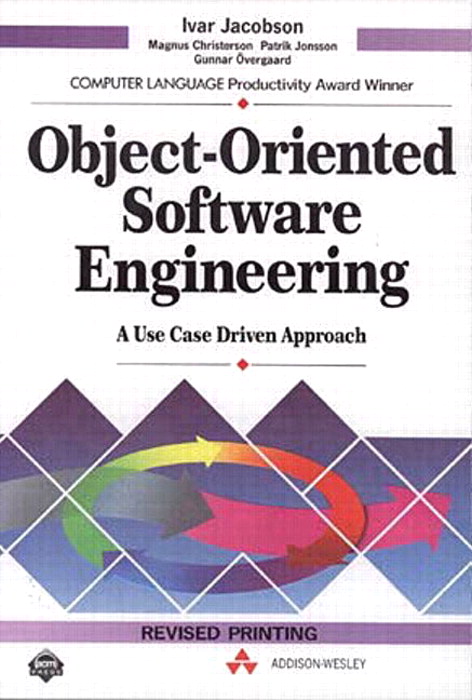 How can software developers, programmers and managers meet the challenges of the 90s and begin to resolve the software crisis? This book is based on Objectory which is the first commercially available comprehensive object-oriented process for developing large-scale industrial systems. Ivar Jacobson developed Objectory as a result of 20 years of experience building real software-based products. The approach takes a global view of system development and focuses on minimizing the system's life cycle cost. Objectory is an extensible industrial process that provides a method for building large industrial systems. This revised printing has been completely updated to make it as accessible and complete as possible. New material includes the revised Testing chapter, in which new product developments are discussed.

You will benefit from this book if you are a system developer seeking ways to improve in your profession. If you are a student with no pervious experience in development methods, you will learn a robust framework which you can fill with details as you take part in future development projects. Since the focus on the text is on development, the book will be convenient to use in combination with other texts on object-oriented programming. Many examples illustrate the practical application of analysis and design techniques.

From this book you will get a thorough understanding of how to use object orientation as well as the basic technique throughout the development process. You will learn the benefits of seamless integration between the different development steps and how the basic object-oriented characteristics of class, inheritance and encapsulation are used in analysis, construction and testing. With this knowledge you are in a much better position to evaluate and select the way to develop your next data processing system.

Even though object orientation is the main theme of this book, it is not a panacea for successful system development. The change from craftsmanship to individualization does not come with the change to a new technique. The change must come on a more fundamental level which also includes the organization of the complete development process. Objectory is one example of how this can be done.

This book does not present Objectory. What we present is the fundamental ideas of Objectory and a simplified version of it. In this book we call this simplified method OOSE to distinguish it from Objectory. To use the process in production you will need the complete and detailed process description which, excluding large examples, amounts to more than 1200 pages. Introducing the process into an organization needs careful planning and dedication. It also requires that the process be adapted to the unique needs of the organization. Such process adaptations must of course be carefully specified, which can be done in a development case description, as will later be explained.

It is our hope that we have reached our goal with this book, namely to present a coherent picture of how to use object-orientation system development in a way which will make it accessible both to practitioners in the field and to students with no previous knowledge of system development. This has been done within a framework where system development is treated as an industrial activity and consequently must obey the same requirements as industry in general. The intention is to encourage more widespread use of object-oriented techniques and to inspire more work on improving the ideas expounded here. We are convinced that using these techniques will lead to better systems and a more industrial approach to system development.

Part I: Introduction. The book is divided into three parts. The first part covers the background, and contains the following chapters:

Part II: Concepts. The second part is the core of the book. It contains the following chapters:

The first chapter in this part introduces the fundamental concepts of OOSE and explains the reason why these concepts are chosen. The following chapter discuss the method of analysis and construction. The next two chapters discusses how the method may be adapted to real-time systems and database management systems. The components chapter discusses what components are and how they they can be used in the development process. Testing activities are discussed in a chapter of their own.

Part III: Applications. The third and last part covers applications of OOSE and how the introduction of the new development process may be organized and managed. This part ends with an overview of other object-oriented methods. This part comprises:

Appendix. Finally we have an appendix which comments on our development of Objectory.

So, how should you read this book? Of course, to get a complete overview, the whole book should be read, including the appendix. But if you want to read only selected chapters the reading cases below could be used.

If you are an experienced object-oriented software engineer, you should be familiar with the basics. You could read the book as suggested in Figure P.1.

If you are a newcomer to object-orientation and software engineering you could read the book as in Figure P.2

If you are an experienced software engineer you could read the book as in Figure P.3

If you are a manager you could read the book as proposed in Figure P.4. Although the book is not object-oriented, it is written in a modularized way and can be configured in several different ways. Building systems in this way is the theme of the book, and the technique and notation used above is very similar to the technique used in this book.

A short history and acknowledgments

The work presented in this book was initiated in 1967 when I proposed a set of new modeling concepts (notation with associated semantics) for the development of large telecommunication switching systems. The main concepts were signals and blocks. A real-time system is an open system communicating with its environment by signals alone. A signal models the physical stimulus/response communication which a concrete system has when interacting with the outside world. Given a signal as input, a system performs internal actions such as executing algorithms, accessing internal information, storing results and sending output signals to the environment. This view presents the system in a very abstract way - as a black box. A less abstract view on a lower level models the system as a set of interconnected blocks. Blocks are modules which can be implemented in hardware or software or any combination of both. A block communicates with its environment only through signals. Signals between two blocks are internal, whereas signals modeling physical communication, that is, signals between a block and the environment of the system, are external. Internal signals are messengers conveying data from one block to another within the same system. All entries of a block were labelled and constituted the signal interface of that block, to be specified in a separate interface document. Hence the system can now be viewed as a set of interconnected blocks jointly offering the functions of the system. Each block has a program which it obeys on a receipt of an input signal, performing internal actions, that is, executing algorithms, storing and accessing block internal information, and sending internal and external signals to the environment.

The proposal can be summarized as an attempt to unify long experience of systems design with the possibilities offered by dramatically new computer technology. Since the two technologies were so different, this was not a self-evident method, neither within Ericsson nor within computer science. There was a rather strong belief that the two represented unrelated technological universes: the new one was so different that it would be meaningless and only a burden to make any attempt to learn from the old one. However, the two techniques were joined and a set of modeling concepts evolved.

The modeling constructs were soon followed by the skeleton of a new design method, the use of which was first demonstrated in the development of the AKE system put into service in Rotterdam in 1971, and more completely demonstrated in the AKE system put into service in Fredhall, Sweden, in 1974. Naturally this experience has guided subsequent work on the development of the successor to AKE, the AXE system, which is now in use in more than 80 countries worldwide. The modeling constructs were very important and, for the AXE system, a new programming language and a new computer system were developed in accordance to these early ideas.

The modeling constructs introduced during the 1960s were further formalized in research taking place between 1978 and 1985. The research resulted in a formally described language which offered support for object-orientation with two types of object and two types of communication mechanism, send/wait and send/no-wait semantics. The language supported concurrency with atomic transactions and a special semantic construction for the handling of events similar to the use case construct presented later. This work, reported in a PhD thesis in 1985, resulted in a number of new language constructs, initially developed from experience, being refined and formalized. This was a sound basis from which to continue and, taking a new approach, develop the method. The principles of Objectory were developed in 1985-7. I then further refined and simplified the ideas, generalized the technique used in the telecom applications, extended it with the inheritance concept and other important constructs like extensions, and coupled to it an analysis technique and object-oriented programming.

Today these concepts have been further redefined. The Objectory process, of which this book describes some fundamental ideas, is the result of work by many individuals, most of whom today work at Objective Systems SF AB, Sweden. Gunnar Overgaard and Patrik Jonsson did much of the writing of the first process description of Objectory analysis and design, respectively. Magnus Christerson did much to condense and rewrite the material into the form of this book. They have all contributed to Objectory; especially the formalization of the concepts. Magnus has also related the ideas of Objectory to other areas as presented in this book. Fredrik Lindstrom has also been involved in the condensation of the material of this book. Agneta Jacobson, Bud Lawson amd Lars Wiktorin have prepared material for some of the chapters.

Changes to this revised printing, apart from minor general corrections and improvements, are: