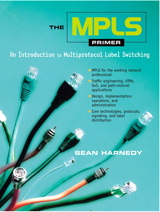 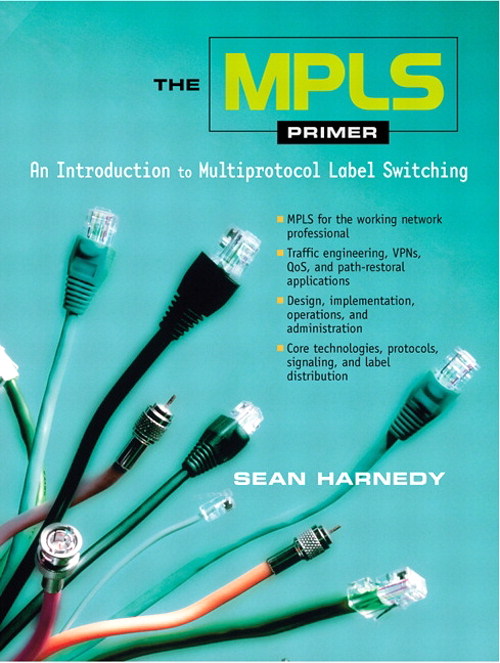 MPLS Primer, The: An Introduction to Multiprotocol Label Switching

The complete guide to MPLS for the working network professional.

Leading consultant Sean Harnedy introduces every aspect of MPLS technology: concepts, standards, evolution, real-world design and implementation, day-to-day operations, and more. From never-before-published deployment tips to hands-on comparisons of the leading MPLS implementations, The MPLS Primer gives you the information you need to deliver on the promise of MPLS—starting today.

Whether you're a network architect, administrator, manager, or consultant, The MPLS Primer is your hands-on jumpstart for planning, deploying, and succeeding with MPLS!

How Multiprotocol Label Switching Will Benefit the Internet

You could not step twice into the same rivers; for other waters are ever flowing on to do.

We must change to master change.

Today's providers of networks and network services are faced with many daunting challenges. Figure P-1 on the next page depicts the key demands of network customers. These include an appetite for new types of value-added network services, especially services based on the Internet Protocol (IP), the need to utilize an upgraded networking infrastructure, and the sheer increased demand for more bandwidth.

The personnel that provide networking within the various tiers of a network, Internet service providers (ISPs), and other organizations that deal with existing telecommunications and data communications networks must wear many hats. Network administrators, operators, planners, and architects may assume, at times, functional roles similar to those of fire fighters, police officers, teachers, mathematicians, programmers, and many others. The administration of today's networks is indeed a challenge. To cope with all of this change, a person dealing with this generation and the next generation of networks must even take on the role of philosopher!

The ancient Greeks are generally credited with inventing philosophy. It is interesting to note that without precedence in most matters, many important Greek philosophers created theories that, at first glance, seem irreconcilably opposed.

Heraclitus felt that the only constant in the world was change; he is famous for his comment that one never steps into the same river twice. His contemporary, Democritus, had the completely opposite view. He was one of the first proponents of atomic theory and the notion that in spite of all outward appearances, everything is essentially made up of the same thing-atoms. For Democritus, change was somewhat of an illusion, merely a rearrangement of atoms.

An important point to take from this duality of vision is that change is a matter of perspective. Understanding what change is and managing its consequences is an important task, one that is fundamental in successfully moving forward and progressing. Nowhere is change more apparent and more dramatic than in networking technology and the Internet. A prime example of this is that estimates on the doubling of the bandwidth demand for Internet traffic range from three months to one year! This is change that needs to be understood and managed.

Our Heraclitus-like selves can be easily panicked and overwhelmed by all the latest technological changes that are thrust upon us everyday-from MPLambdaS and dense wave division multiplexing (DWDM) to quality of service (QoS) and service level agreements (SLAs) for voice, data, and video traffic. It is becoming difficult enough to understand the basic concepts, let alone make intelligent decisions on what is to be done about them and how they relate to any strategic network planning.

Our Democritus-like selves then come to the rescue. We understand basic networking concepts. Most of us know that the Open Systems Interconnection (OSI) model has seven layers, and while technology is rapidly evolving, it can be understood within the framework of enhancements and new development of established products and network architectures.

The fundamental routing that occurs in the Internet has changed little since its beginnings. IP version 6 (IPv6) has only recently made inroads into the original IP version 4 (IPv4), which has been with us for almost 20 years, little changed since Request for Comments (RFC) 791. Routing protocols such as Open Shortest Path First (OSPF) and the Border Gateway Protocol (BGP) have been around for several years and are evolving to match newly emerging routing and signaling demands. IP technologies coexist with other prevalent networking frameworks such as Frame Relay (FR) and Asynchronous Transfer Mode (ATM).

Providers of networks and network services need to offer solutions for these many daunting challenges. As shown in Figure P-1, there are two primary solutions being explored: new technologies and more network resources. If we ponder for a moment, we can see how these two approaches are complementary, how they marry the view of Heraclitus and Democritus to provide a way of mastering change for today's networks. We must adapt networks by developing and using new technology as these approaches become integrated into the network infrastructure that is already in place.

So how does Multiprotocol Label Switching (MPLS) fit in? MPLS is a new development that builds on technologies that have already proven themselves successful in the networking arena. MPLS is a fresh approach that synthesizes the best of the connection-oriented model with the existing packet-based Internet and IP. By looking closely at MPLS and all of the many associated topics and developments, one can begin to assess whether MPLS is a new and positive change to the Internet and network technology. Is MPLS an evolutionary step for the Internet architecture, or is it an attempt at something different that may or may not succeed? Either way, one has to be ready?

This book is titled as a primer on MPLS in the hopes of providing a comprehensive introduction to the topic, as well as documenting all of the associated subjects and developments that are occurring in "Internet-time" in this area.

I will use the convention of calling out parenthetical topics by giving more information that the reader may find interesting as follows:

Because this is a primer?

A primer is a small, beginning book that introduces the reader to a subject, often for the first time. The word is derived from the Latin word primarius, meaning primary, or first. Its original use, dating back to the fourteenth century, is as the reference to a small book for teaching children how to read.

MPLS is an exciting new technology. It is not being developed in a vacuum, but rather under the auspices of the Internet Engineering Task Force (IETF) whose motto of "running code, rough consensus" will make this technology a prominent Internet standard. Implementations of MPLS are being fielded and tested as you read these words. Implementation experience and further development in new areas-particularly in the emerging optical area-will determine MPLS's success. Stay tuned.

This is the preface. It contains a general introduction to the book. It describes the goals of the book, the book's audience, how the book is organized, and the conventions used. It also includes the "Acknowledgments" section. It is my sincerest wish that this book broadens the reader's knowledge base of MPLS and its related technologies, and serves as a valuable guide and reference on these topics.

This book is written to introduce the reader to MPLS. There are several specific goals:

This book is intended for network administrators, planners, architects, and operators who are dealing with, or will soon be confronted with, the adaptation of new Internet technologies such as MPLS. Many more people will find this book interesting and worthwhile also, including people interested in routing and switching and the delivery of IP services. People interested in emerging network applications such as traffic engineering (TE), delivering QoS, and virtual private networks (VPNs) will find this book worthwhile as well. Network and systems management people interested in management standards and the Simple Network Management Protocol (SNMP) as it relates to MPLS will gain knowledge of work being done in these areas. People interested in the use of MPLS with the latest optical technologies such as Generalized MPLS (GMPLS) will also find this book informative.

This book includes a complete discussion of MPLS and all of the issues dealing with it.

The book is organized into ten chapters with six appendices. There is also a bibliography with important Web sites, a glossary and acronyms section, and an index.

Chapter 1, "Introducing Multiprotocol Label Switching," provides an introduction and overview to MPLS by asking the "five W's and H": who, what, why, when, where, and how. Key MPLS terms are defined. This chapter also contains a review of internetworking technology basics. It concludes with a discussion of what MPLS is promising in regard to advancing current Internet-based networking technology.

Chapter 2, "MPLS Background," looks at all of the many topics and trends that must be understood; MPLS cannot be looked at in isolation. This chapter includes an introduction to the TCP/IP protocol suite, the concepts underlying switching and routing, a brief history of MPLS, and several other related issues.

Chapter 6, "MPLS Operation and Uses," introduces current major uses of the technology. The key MPLS applications such as TE, VPNs, QoS, path restoral services, and others are described.

Chapter 9, "Current MPLS Implementations," introduces the companies and enterprises that are using and developing MPLS implementations. These include equipment vendors, stack providers, service providers, and other organizations involved with MPLS.

Appendix A, "An MPLS Chronology," presents a timeline of MPLS's short history.

Appendix B, "MPLS-Related RFC Index," contains a list of RFCs for MPLS and related topics.

Appendix E, "A Detailed Introduction to SNMP," describes the Simple Network Management Protocol, or SNMP. This appendix includes the SNMP reference model and a discussion of the protocol, Structure of Management Information (SMI) #data definition language, and related MIBs. The three major versions of SNMP are also explained.

Appendix F, "RFC 2570: Introduction to SNMPv3," provides an overview for the third and current version of SNMP.

The bibliography contains the list of references used. This includes books, periodicals, and related Web sites. Finally, there is a section that contains a glossary of terms and their associated acronyms.