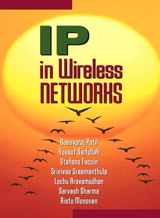 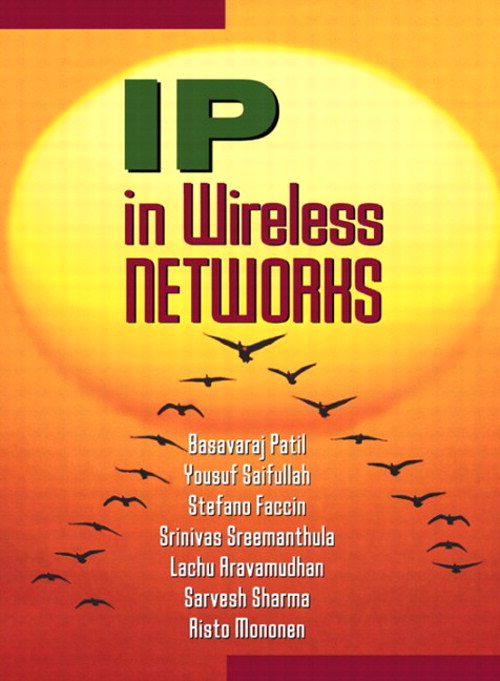 IP in Wireless Networks is the first comprehensive guide that shows how IP is enabled in 2G, 2.5G and 3G wireless networks. A world-class team of wireless engineers presents a systematic, expert guidance for every leading wireless technology, including 802.11, Bluetooth(tm), GSM/GPRS, CDMA and i-mode. This book's in-depth coverage encompasses architecture, deployment strategies, operation, mobility models, applications, and much more.

Getting to Know Wireless Networks and Technology


1.Introduction to the Internet.

3. Overview of Wireless Networks and Technology.

7. Challenges of IP in Wireless Networks.

16. Standards Bodies and Their Roles in the Future.

The Internet Protocol (IP) has had a tremendous impact on network communications in the last decade. Although IP itself has been around for a much longer time, its relevance and impact on other networks have been felt the most since the 1990s. Before IP became the dominant protocol, a number of networking protocols proliferated. There was IBM's SNA, Appletalk from Apple Computers, Netware from Novell, Xerox Network System from Xerox and others from Digital Equipment Corporation and Microsoft. The success of the Internet and the internetworking protocols that make this possible has made IP the de-facto protocol for existing networks and also as the protocol to be used in the design and architecture of next-generation networks. Wireless networks, which hitherto have been built around protocols and architectures developed within the realms of ITU, ETSI, TIA and others, are now adopting the Internet model and protocols.

The 1990s also saw the rapid growth of wireless networks. Two major wireless technologies, GSM and CDMA, have taken center stage. The wide area cellular networks deployed so far provided primarily voice-based services. Data services were limited due to bandwidth constraints, and performance was poor due to the nature of the air interface designs, which have been built with emphasis on voice quality and capacity. However, with the evolution of cellular networks towards 3G, packet data services have been a major focus in terms of providing higher bandwidth and overall accessibility to the Internet. Vast improvements in radio technology, as well as the need to provide access to the Internet, has driven the evolution of cellular to support packet data. Since the 3G wireless networks are viewed as an extension to the Internet, there is significant emphasis in ensuring that IP operates in a manner very similar to the wired Internet today. Hence, protocols and network architectures for the wide area cellular networks are designed and built to support IP in as efficient a way as possible. Wireless networks are expected to become more data-centric in the next few years, rivaling voice as the "killer" application. The deployment of new data services will have a ripple effect on the wireless networks and the end user devices and terminals; they will change to better support these new applications. The wireless information society that is being created now will continue to grow. The technology enablers such as 3G-and-beyond packet data networks and services will allow this to thrive.

This book captures the essential elements in this convergence path of wireless networks and the Internet protocols resulting in the new paradigm of "Wireless IP." It covers all the important 2G cellular technologies that we have seen in the past decade, along with 3G and other important wireless technologies that will be deployed in the near future. The book extensively discusses the aspects of IP that affect the wireless medium and how it must be modified to guarantee the fullest use and deployment of Wireless IP. This includes the modifications required in protocols, architectures, and framework in virtually every area such as QoS, security, mobility, and so on. The book can be viewed in four different sections. The first section, Chapters 1 to 3, is preliminary introductory chapters. The second section, Chapters 4, 5, 6 and 7, describes second-generation (2G) wireless networks and the support for packet data in these. Chapters 8, 9, 10, 11, 12 and 13, which constitute the third section, are focused on third-generation (3G) wireless networks as well as other technologies such as 802.11 and WAP. The fourth section of the book, Chapters 14, 15 and 16, describes the type of future applications as well as a view on evolution and the role that standards bodies play. The book is written such that it is not required to read chapters in a sequential manner. The split across the 4 sections can be referred to separately.

Since the focus of the book is on the Internet Protocol (IP), Chapter 1 focuses on the history and the current view of the Internet. It is important to understand the nature of the Internet in order to realize the impact that it has had and continues to have on other networks. Chapter 2 is a primer to the key protocols of IP. This chapter describes protocols at the network layer, transport layer, and application layer. It is intended to serve as a quick reference for readers to refer to an IP protocol, and not as an exhaustive description of any one protocol. Chapter 3 provides an introduction to the concepts of wireless networks as well as a brief history of the same. GSM networks span the globe and GSM technology is the predominant wireless technology today. Chapter 4 discusses circuit switched data services including high-speed circuit switched data offered by GSM. Applications such as short message service (SMS) and also email connectivity are described. Chapter 5 looks at circuit switched data in IS-136 networks. Since second-generation networks in North America have been based on this technology it is important to understand support for circuit switched data services in these networks as well. While circuit switched data has not been a great success, SMS has definitely been a tremendous success. The other major wireless technology is CDMA, IS-95. Circuit switched data services in IS-95 networks are covered in Chapter 6. Wireless networks offer a set of different challenges to IP than the wired networks in the last two decades. Mobility issues, the nature of retransmissions over the air interface developed, and other challenges are covered in Chapter 7. GPRS, which is the evolution of GSM to support packet data, is covered in Chapter 8. GPRS is the first wireless network (not considering CDPD or other variants such as Mobitex) that offers packet data services without having to rely on the circuit switched network and radio technology. 3G UMTS networks provide high speed packet data access. The interfaces, protocols and concepts of UMTS are presented in Chapter 9. cdma2000 networks and the approach to packet data in these are covered in Chapter 10. cdma2000 is the evolution of IS-95 networks. 802.11 technology, which has been developed by IEEE for wireless LAN, is described in Chapter 11. Chapter 12 looks at Bluetooth, which is a personal area networking technology. WAP has been the initial approach taken by wireless networks to emulate the World Wide Web. I-mode is a service that originated in Japan and is now slowly being deployed in other parts of the world. WAP and I-mode are covered in Chapter 13. With the availability of wireless data networks, the technology enabler is in place. It is now up to the types of services that are deployed which will decide success. Chapter 14 looks at the types of future applications that we may see in these networks. The evolution of wireless networks including GSM, CDMA, and 802.11 are captured in Chapter 15. Standards bodies have a huge impact on the technologies that are developed. The role of the major standards bodies that impact wireless data networks and IP are presented in Chapter 16.

The audience for this book is anyone interested in the potential in the convergence of the wireless and IP networks. From a technical point of view, engineers and application developers, who need to understand how packet data services and IP work in the wireless world, may find this text useful. It is also useful to people who do not have a technical background, but who work in the telecommunications or device-manufacturing industry in the fields of sales, marketing, and operations. They may find this book very informative for gaining insight into various wireless technologies available and the promise of convergence of the circuit switched voice and packet switched data networks. Other potential readers include those who may not be in the wireless industry but see the potential of wireless networks and technology and need to realize the basics of the operations of packet data in these. Students of engineering will also benefit from this book as it provides a complete description of the major wireless technologies today and the roadmap to the future.

This book has been written based on the current capabilities in the technologies described in this book and the general direction in the industry towards the wireless Internet. For this reason, this book mostly represents the views and opinions of the authors, based on their technical understanding, experience and the significant amount of research in these areas and does not necessarily represent the views of their employers.