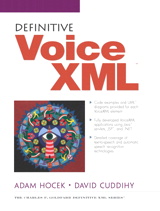 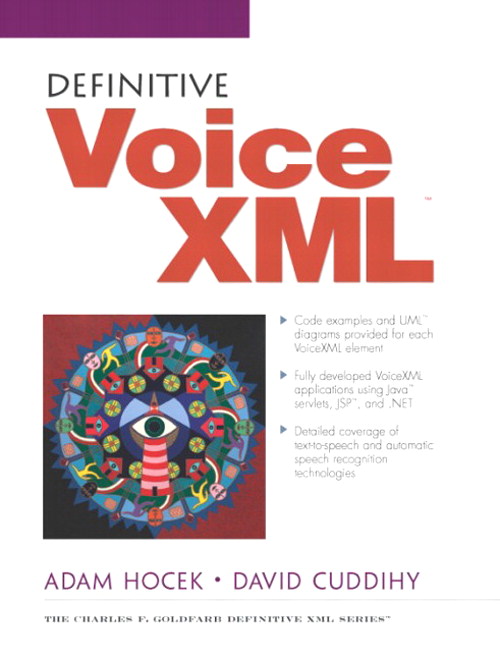 "XML is not a spoken language, but thanks to VoiceXML, it is the language of choice for developing spoken interfaces. If you want to voice-enable your applications and Web sites, this book speaks your language."

Definitive VoiceXML bridges the gap between enterprise computing and telephony engineering, demonstrating exactly how to build new enterprise-class voice applications and voice-enable existing applications. It's the first book that delivers the depth and breadth of knowledge needed by both enterprise and telephony developers, thoroughly addressing the unique challenges of building voice systems for business.

Whether you're developing systems for customer service, finance, travel, wireless commerce, or anything else, Definitive VoiceXML gives you the proven techniques you need to maximize performance, reliability, and ROI.

Introduction to VoiceXML and Voice Services


Voice services and applications. What is VoiceXML? Road map to the book and other resources. Getting Started.

Speech is the most human of human interfaces. No written text has the impact of a baby’s cry, a lover’s whisper … or your boss calling you into his office!

But until recently, the cost and complexity of implementation meant that there was no freedom of speech where software interface design is concerned.

Voice applications required a special purpose computer equipped with telephony and voice synthesis hardware. The software to program these machines was proprietary, complex, and arcane.

Now XML is changing all that — as it has so many other aspects of computing — in the form of a markup language for describing and controlling conversations. VoiceXML, in conjunction with advances in speech recognition and synthesis, is rapidly making the Web a vocal medium.

Adam Hocek and David Cuddihy are just the people to teach you how to take advantage of this new technology. They are professional engineers with decades of telephony and audio experience, and they work with VoiceXML every day.

XML may not be a spoken language, but with VoiceXML and this book you can bring the power and freedom of speech to your applications and Web sites.

HTML, CSS, and JavaScript All in One: Covering HTML5, CSS3, and ES6, Sams Teach Yourself, 3rd Edition