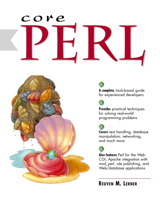 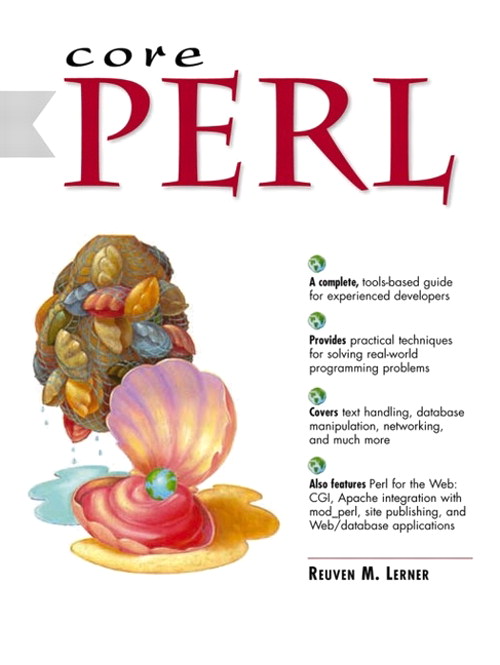 The serious developer's guide to Perl!

This start-to-finish tutorial and reference gives experienced developers the techniques and real-world code they need to master Perl—fast! Begin by leveraging your current skills to quickly master the fundamentals of Perl development—from basic syntax to objects, data structures to text processing. Next, learn how to use Perl's powerful facilities for working with files, networks, and relational databases. Finally, Core Perl shows you how to make the most of Perl in any Web application-from simple CGI to full-fledged site development and delivery. Coverage includes all this and more:

For years, developers worldwide have relied on Perl for fast, flexible solutions to an extraordinary range of problems, from text manipulation and system administration to database access and Web integration. Core Perl gives developers the skills and insight needed to build robust, maintainable, high-performance code—whatever your application.

(NOTE: Each chapter concludes with a Conclusion.)


What is Perl? When not to use Perl. The Perl license. Perl versions and standardization. Perl support. Retrieving and installing Perl. Retrieving modules from CPAN.


Tying. Tying a scalar. Tying a hash. Tying an array.

A. Bibliography and Recommended Reading.

Perl has been my programming language of choice since early 1992,when I began work on my undergraduate thesis. Part of the workrequired that I put 10 years of campus newspaper archives on theInternet using a system known as WAIS (Wide Area Information System).

For this project, I bought two books: One described sed and awk, the traditional Unix text-processing languages. The second described Perl, whichwas then relatively new. It was obvious that Perl was more advanced thanthe other two options, and I began to write small-and medium-sized Perlprograms to make the newspaper available online.

My affinity for Perl has increased significantly since my graduation fromcollege. I depend on it for much of my consulting work, as well as manypersonal projects. The speed with which I can produce a working program,and the wealth of modules available on the Internet, makes Perl a greatchoice.

If you are new to programming

Like other books in the Core series, Core Perl does not teach you how toprogram. It is meant to teach you enough about Perl syntax, functions, andidioms to begin writing intermediate and advanced programs. The numerousexamples are often described in great detail so that you can incorporate theminto your own programs. I have used drafts of this book in training my ownemployees, and have incorporated their feedback into the final product.

This book is divided into three parts:

Perl basics. We examine Perl syntax, beginning with the different majordata types (scalars, arrays, and hashes) and quickly moving onto ref-erences and complex data structures. We then discuss a number ofbuilt-in functions and variables, and how to use regular expressions toprocess text. This part of the book ends with chapters on subroutines,modules, and object-oriented syntax.

Using Perl. Perl has excellent facilities for working with files, networks,and relational databases. In this part of the book, we create programsthat exercise all of these features, creating simple network clients andservers, parsing text, and using Perl 's database interface (DBI). We alsodiscuss ways to improve and fix our programs, including the "tainting "mechanism, various command-line flags and the built-in Perl debugger.

The World Wide Web. Perl is an excellent and popular choice for server-side Web programs. We begin by looking at CGI, an old but popu-lar method for generating dynamic content. We also discuss HTTPcookies, HTML/Perl templates, and how to incorporate a relationaldatabase within a site. The final chapter describes the mod perl modulefor Apache, ending with the Mason component-based Web publishingsystem.

What this book is not

Perl is a rich language, and it continues to grow daily. Consequently, no onebook can hope to cover everything. Here are some topics that Core Perldoes not discuss:

Tk and graphical user interfaces (GUIs). You can create GUIs withPerl using the cross-platform Tk toolkit. The programs in Core Perluse a command-line (text) interface, or are meant to be run as a server-side Web program.

Embedding Perl. It is possible to put Perl inside of a C or C++ program.This functionality is demonstrated best by mod perl (see Chapter 17),but is also used by Oracle and other products. Core Perl does not discuss this subject, about which you can read in the perlembed manualpage.

External linking with XS. XS allows Perl to use C-language librariesand forms the core of a number of important Perl modules, includ-ing DBI. We do not discuss XS in this book; see the standard perlxsand perlxstut manual pages if this subject interests you.

Compilation. Perl programs are traditionally compiled when they are invoked. The compiler turns a program into "opcodes," which are theninterpreted and executed by Perl. Many programmers would like atrue Perl compiler, which would produce standalone, precompiled programs. This goal is still somewhat far off, but the Perl compiler projectcontinues at a steady pace. Core Perl does not discuss compilation,but you can read more on this subject in the documentation for the Bmodule.

Threads. Perl grew up on Unix, which traditionally uses many processes.Modern operating systems allow for multiple threads of execution withina process, which is more efficient. Threading is still an experimentalfeature in Perl, and is not discussed in Core Perl. However, a tutorialon Perl threading is available in the online perlthrtut manual.

Now that you know a bit about the book, let me tell you something aboutmyself: I have been working as a networking and Internet consultant since1995, when I moved from the United States to Israel. Since then, I haveworked on a variety of projects, most of which involve server-side Web applications using a relational database. Since January 1996,I have writtenthe monthly "At the Forge "column in Linux Journal, in which I exploreWeb-related technologies and programming techniques.

Before moving to Israel, I worked for Hewlett-Packard 's Medical Prod-ucts Group, connecting hospital devices to databases. I also worked forTime Inc.'s ill-fated Pathfinder Web site, helping such magazines as Fortune, Money, and Sports Illustrated for Kids produce their initial Web sites. At both jobs, I used Perl to solve a wide variety of problems, from analyzingerror logs to storing personalization information in a database.

I also rely on Perl for personal projects. The GNU Emacs FAQ, whichI edit, is maintained by a small set of Perl programs. The maintenancework that I do on a Web site and mailing list for residents of the Israelicity of Modi 'in is largely done in Perl. And, of course, Perl played a majorrole in the production of this book, uploading new drafts to my editors andextracting program fragments from the manuscript.

Despite my best efforts, there are undoubtedly still some errors in this book.Please send corrections to bugs@coreperl.com; I will post updates on the CorePerl Web site, at http://www.coreperl.com

One of the mantras of the Perl community is that programming shouldbe fun. If this book makes it possible for you to work more efficiently andenjoyably, my mission will have been accomplished.