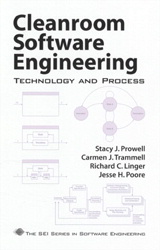 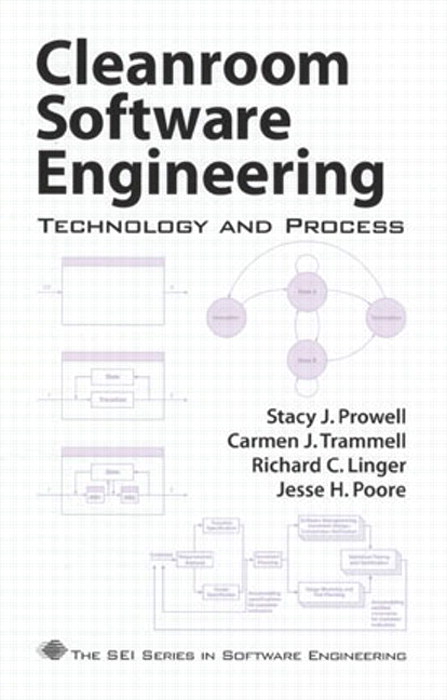 Cleanroom originated with Harlan D. Mills, an IBM Fellow and a visionary in software engineering. Written by colleagues of Mills and some of the most experienced developers and practitioners of Cleanroom, Cleanroom Software Engineering provides a roadmap for software management, development, and testing as disciplined engineering practices. This book serves both as an introduction for those new to Cleanroom and as a reference guide for the growing practitioner community. Readers will discover a proven way to raise both quality and productivity in their software-intensive products, while reducing costs.

Relationship of Cleanroom to Other Practices.

Example: Specification of a Security Alarm.


Benefits of Statistical Testing Based on a Usage Model.


An Introduction to the CRM.

11. Cleanroom and the Capability Maturity Model for Software.


The CMM for Software.

Step 4: Select an Implementation for the State Data Items.

Step 5: Select an Implementation for Each Entry in the State Box Table.

The book is organized into three parts as follows:

In many situations, Cleanroom technologies can be applied without special tools. For example, box structure specifications and designs can be recorded using conventional word processors and templates. It is often the case, however, that tools can simplify and improve Cleanroom practice, and help enable scale-up to larger systems. Accordingly, the principal examples in this book are augmented with output from Cleanroom tools to provide additional analysis and insight.

This book is intended to give managers and technical practitioners an understanding of Cleanroom technologies, and to provide an overall process framework for managing Cleanroom projects. Part I describes the underlying theory and the methods of practice, and is recommended for all readers. Part II defines Cleanroom processes and may be used as both a reference and as a guide for management activities. The large case study in Part III will help readers to understand what is produced in a Cleanroom project and to envision how Cleanroom can be applied to their own projects.

We also recommend this book for both undergraduate and graduate students in computer science and software engineering programs. It is important for students to understand the value and necessity for intellectual control in large-scale software engineering, and the importance of the technologies and processes used to achieve it. Of special importance for students is an appreciation of the incremental development life cycle, methods for precise specification, design, and verification, and application of usage-based testing to certify software.

The authors thank Ingrid Biery, Laura Prados, and Kirk Sayre for their valuable assistance in the verification of various work products presented herein.

We also thank Helen Goldstein, our editor at Addison-Wesley, for her patience and support in working with us to produce this book.

From its modest beginnings some 50 years ago, computer software has become a critical element of modern society, with global reach and impact on virtually every aspect of human endeavor. Software technology is a principal enabling agent in business, industry, government, and defense, and permeates products and services of all kinds. Every day, trillions of tasks are performed by software, ranging from personal computer applications to large-scale, worldwide networked systems of astonishing complexity. Economic sectors such as manufacturing, banking and financial services, communications, health care, energy, transportation, and education, as well as national defense and government, rely on software for the conduct of daily operations. It is no exaggeration to say that the progress of modern society is dependent totally and irrevocably on software.

As a result, software has become a pivotal component in the global economy. The computer hardware industry relies on software to bring its machines to life, and industries and services of all kinds depend on software to increase productivity and unleash the creativity of millions of workers. Software is a profound agent of change, enabling reengineering of corporations and jobs on an unprecedented scale. It is driving deep structural changes in the global economy through automation and augmentation of mental tasks, much as the industrial revolution in the past century transformed society through automation of physical tasks. In short, software has become a critical resource--vital to well-being and competitiveness.

With the increasing societal dependence on software has come increasing risks of software failure. The vast majority of software today is handcrafted by artisans using craft-based techniques that cannot produce consistent results. These techniques have little in common with the rigorous, theory-based processes characteristic of other engineering disciplines. As a result, software failure is a common occurrence, often with substantial societal and economic consequences. Many software projects simply collapse under the weight of unmastered complexity and never result in usable systems at all.

Cleanroom is a theory-based, team-oriented process for the economic production of high-quality software. Cleanroom is theory based because sound theoretical foundations are essential to any engineering discipline, and no amount of good management can substitute for their absence. Cleanroom is team oriented because software is developed by people, and theory must be reduced to practical application to harness human creativity and cooperation. Cleanroom deals with economic production of software because real-world business constraints and resource limitations must be satisfied in software engineering. Finally, Cleanroom deals with production of high-quality software because high quality improves manageability, reduces risks and costs, satisfies customers, and provides a competitive advantage.

The theoretical foundations of Cleanroom were established in the late 1970s and early 1980s, when Harlan Mills, an accomplished mathematician and IBM Fellow, related fundamental ideas in mathematics, statistics, and engineering to software. Influenced by Edsger Dijkstra on structured programming, Nicholas Wirth on stepwise refinement, and David Parnas on modular design, Mills defined the scientific foundations for an engineering approach to software.

Two fundamental insights drove Mills' work: first, that programs are rules for mathematical functions and second, that potential program executions are infinite populations requiring statistical sampling for quality certification. The first insight opened all of function theory to software development and led to the technologies of box structure specification and design, function-theoretic correctness verification, and incremental development. The second insight opened all of statistical theory to software testing and led to the technology of statistical usage testing and quality certification.

Mills' ideas were refined and demonstrated in collaborations with colleagues Alan Currit, Michael Dyer, Alan Hevner, Richard Linger, Bernard Witt, and others in IBM's Federal Systems Division. Structured Programming: Theory and Practice (by Linger, Mills, and Witt), published in 1979 by Addison-Wesley, introduced function-theoretic methods for software specification, design, verification, and reengineering. Principles of Information Systems Analysis and Design (by Mills, Linger, and Hevner; Academic Press, Inc., 1986) introduced box structure methods for system specification, design, and verification, and introduced incremental development for project management. In 1987 these ideas were integrated under the masthead Cleanroom--a term borrowed from the semiconductor industry to reflect an emphasis on defect prevention rather than defect removal. "Cleanroom Software Engineering" (by Mills, Dyer, and Linger) was published in the May 1987 issue of IEEE Software.

The first Cleanroom software project was managed by Richard Linger of IBM in the mid 1980s. The COBOL Structuring Facility project developed a commercial software reengineering product that exhibited remarkable levels of quality and reliability in customer use, and provided an initial validation of the Cleanroom process.

In 1990 Richard Linger established the IBM Cleanroom Software Technology Center, where further improvements in Cleanroom methods, automation, and technology transfer were achieved. In the early 1990s a mass storage control unit adapter developed using Cleanroom was introduced by IBM. Thousands of units were sold, and after an extended life the product was retired in 1997 without a single field failure reported against the Cleanroom microcode. The development was led by Mike Brewer, and included Paul Fisher, Dave Fuhrer, Karl Nielson, and other team members. Certification testing was led by Joe Ryan and Mike Houghtaling. Today, the testing laboratory in IBM's Storage Systems Division is arguably the world leader in the practice of statistical usage testing of software.

In the late 1980s and early 1990s the highly regarded Software Engineering Laboratory (SEL) at the National Aeronautics and Space Administration (NASA) Goddard Space Flight Center (GSFC) conducted a series of Cleanroom experiments under the guidance of Vic Basili, Scott Green, Rose Pajerski, Jon Valett, and others. The SEL series of Cleanroom experiments are considered by some to be the single most complete research study conducted to date in the field of software engineering. Four ground-control software systems of increasing size were developed using Cleanroom engineering, with results showing consistent improvement in quality and productivity over the already impressive NASA GSFC baseline.

During the formative period of the US Department of Defense (DoD) ARPA STARS Program (Software Technology for Adaptable, Reliable Systems) in the mid 1980s, Cleanroom was selected as a key technology for development and commercialization by STARS leaders, including Dave Ceely, Dick Drake, Bill Ett, Joe Greene, John Foreman, Jim Moore, and others. The company Dr. Mills founded with Arnie Beckhardt to advance Cleanroom--Software Engineering Technology, Inc. (SET)--was selected as the STARS vehicle for commercializing Cleanroom technology. Significant adv