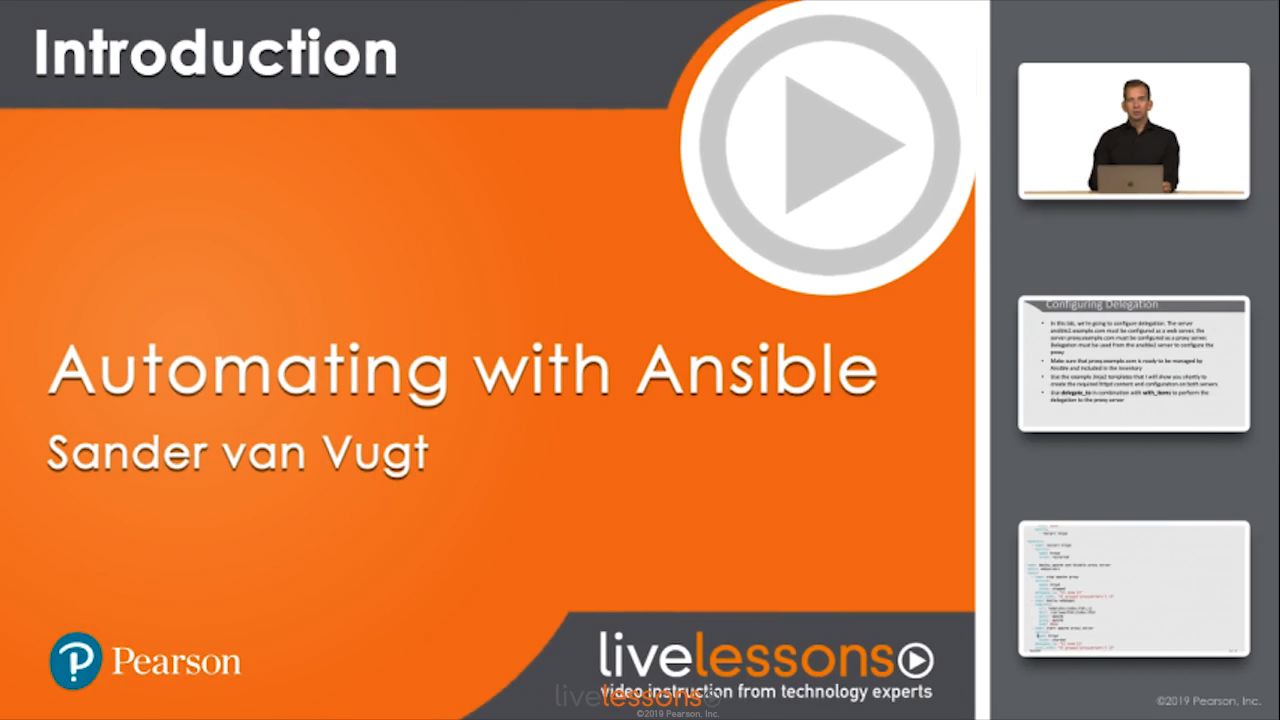 In Automating with Ansible LiveLessons, we build on the Ansible Fundamentals LiveLessons foundation. To make sure that you don't miss anything essential, this course starts with an Ansible Basics getting started lab, which will involve setting up an environment where all the Ansible basic skills will be reviewed. We will then move on to using DevOps. You will learn how Vagrant can be used to set up an environment with virtual machines, and set up an IT Infrastructure with Ansible that you can follow along through the author demonstrations. We will also discuss how to manage Windows, network equipment, as well as cloud infrastructure with Ansible.

Next, we'll have a look at some of the more advanced Ansible features, such as working with roles, task control, and using Ansible Vault. Then, we will discuss Ansible optimization and troubleshooting with walk-through examples. In the last lesson, we'll learn how to work with Ansible Tower, which helps you to efficiently use Ansible in a datacenter environment.

This course compliments the Ansible Fundamentals LiveLessons course and can also be used as a secondary resource to get you started studying for the Red Hat Certificate of Expertise in Ansible Automation (exam 407).

Viewer needs to know how to set up an environment where Ansible is used for configuration management. Also needs to be familiar with the basics of working with Ansible modules in ad-hoc commands and playbooks, and have already learned how to work with Jinja2 templates

Lesson 1, “Ansible Basics Getting Started Lab,” walks you through the basic skills you have learned in my video course “Ansible Fundamentals.” I have developed this lesson as a lab, where you will walk through the different basic tasks that help in setting up an Ansible-managed environment.

Lesson 4, “Managed Task Control” will cover how to work with the different solutions for task control that are available in Ansible. These include with_items, nested loops, the when statement, and handlers. You'll also learn about additional advanced features that fit well with task control, such as working with handlers, tags, blocks, and registering variables.

In Lesson 7, “Optimizing Ansible,” we will discuss the various techniques that you can use to optimize working with Ansible. I will first teach you how to use host patterns to select hosts in an optimized way. Next, we'll talk about delegation and parallelism.

Lesson 8, “Troubleshooting Ansible,” will cover different approaches that can be used if Ansible doesn't do what you want it to do. We'll have a look at Ansible logging, and next we'll discuss troubleshooting playbooks and managed hosts.