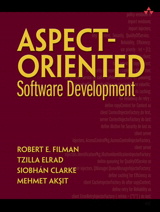 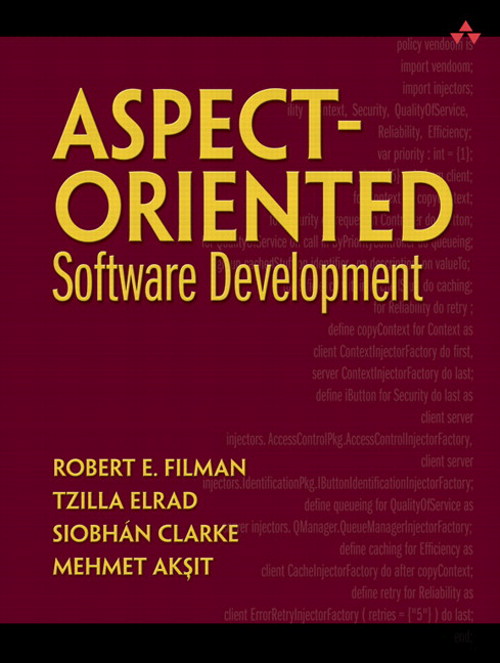 The definitive reference on the emerging and dynamic field of Aspect-Oriented Software Development (AOSD).

° A proven methodology that offers workable, practical solutions to common problems in all areas of software development

° Product launch at OOPSLA in Vancouver, BC (October 2004)

Aspect-oriented Software Development (AOSD) is receiving considerableattention in the software engineering and programming language communities.Since 1997, there have been several successful workshops on AOSD at theleading software engineering conferences. Many have felt that AOSD may havebeen ahead of its time, but the practicality and promise of this paradigm iscatching up with the theory. This new book offers the definitve look at AOSDfrom the movers and shakers behind this concept. Just as object-orientedprogramming was a radical departure from structured programming, AOSD isa departure from the OO concept. AOSD offers increased flexibility and abetter way to develop complex systems without sacrificing scalability, security,and other important concerns. In this book, readers will learn the state-of-theartbest practices in AOSD, and will be able to help their organizations savetime and money by developing complex software systems more efficiently.

I. LANGUAGES AND FOUNDATIONS.

2. Aspect-Oriented Programming Is Quantification and Obliviousness.

18. Aspect-Orientation in the Software Lifecycle: Fact and Fiction.

23. An Initial Assessment of Aspect-Oriented Programming.

25. Developing Software Components with Aspects: Some Issues and Experiences.

Untitled Document Software development is changing. The opportunities of the Internet, computerized businesses, and computer-savvy consumers, the exponential decline in the cost of computation and communication, and the increasingly dynamic environment for longer-living systems are pressing software developers to come up with better ways to create and evolve systems. There is fomenting in software development process, system structure, programming, quality assurance, and maintenance.

Software is about building computational models of some part of the elements or information flow of the world. For all but the most trivial software systems, conquering the engineering of the system requires (perhaps recursively) dividing the system into chunks that can be (by and large) separately created and managed. The last decade of the twentieth century saw the rise (and perhaps dominance) of the object-oriented perspective on system modularization. Object-orientation focuses on selecting objects as the primary unit of modularity and associating with these objects all the system's behavior. Objects are typically elements of the domain or of the computational process.

Object-orientation is reaching its limits. Many things one cares about in creating a software system (concerns) are not neatly localized to the behavior of specific "things." Building diverse systems requires simultaneously manipulating many concerns. Examples of concerns range from non-functional notions such as security, reliability, and manageability to precise implementation techniques such as concurrency control, caching, and error recovery. Since conventional programming technologies are centered on producing a direct sequence of instructions, they require the programmer to remain cognizant of all such concerns throughout the programming process. The programmer must explicitly intermix the commands to achieve these concerns with the code for the primary application functionality. This produces tangled code and erroneous and difficult-to-maintain systems.

About This Book
This book grew out of our experience with the special issue on aspect-orientation in the October, 2001 Communications of the ACM. Seven times as many papers were submitted to that issue as we could print; those that appeared proved among the most popular in the ACM digital library. Simultaneously, we saw a growing number of increasingly popular workshops on aspect-oriented topics. There was clearly great interest in the computer science community for learning more about aspects. This led to two ideas—establishing an international conference on aspect-oriented software development and creating a book to illustrate to the advanced software development community the diversity of ideas in this space. The conference, organized by the Aspect-Oriented Software Association and co-sponsored by ACM, has recently had its third annual meeting; the proceedings are in the ACM digital library.

We intend this book as a volume for advanced software engineers interested in learning about this new direction in software development. To populate the book, we sent out invitations to selected researchers in the field either to submit a new paper presenting an overview of their work or to nominate an appropriate existing paper for reprinting. This book is the result of selecting from and editing those submissions.

How to Read This Book
We recommend the first chapter, which is an introduction to the ideas of aspect-oriented software development, to all readers. Beyond that, system development rests on a basis of programming languages and models, though actual system development demands all the processes of an engineering activity. The ultimate test of a software technology is the systems whose construction it has supported, though aspects are not sufficiently mature to have an impressive portfolio. Correspondingly, after the introduction, the book is structured in three parts: Part 1, "Languages and Foundations," is primarily descriptions of languages for implementing aspects, with some attention to the place of aspects in the programming language universe. Part 2, "Software Engineering," describes technologies for the aspect-oriented software development process. Finally, Part 3, "Applications," details some of the first application experiences using aspect technology. Each part has an introductory section delimiting the space of aspect technology within the topic and outlining the place of each chapter in that space. Beyond that introduction, the chapters (as befits a contributed book on the state-of-the-art) are fundamentally independent. While the authors make the typical reference to other's works, almost every chapter is self-contained.