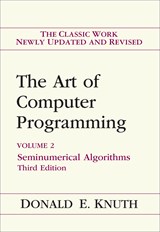 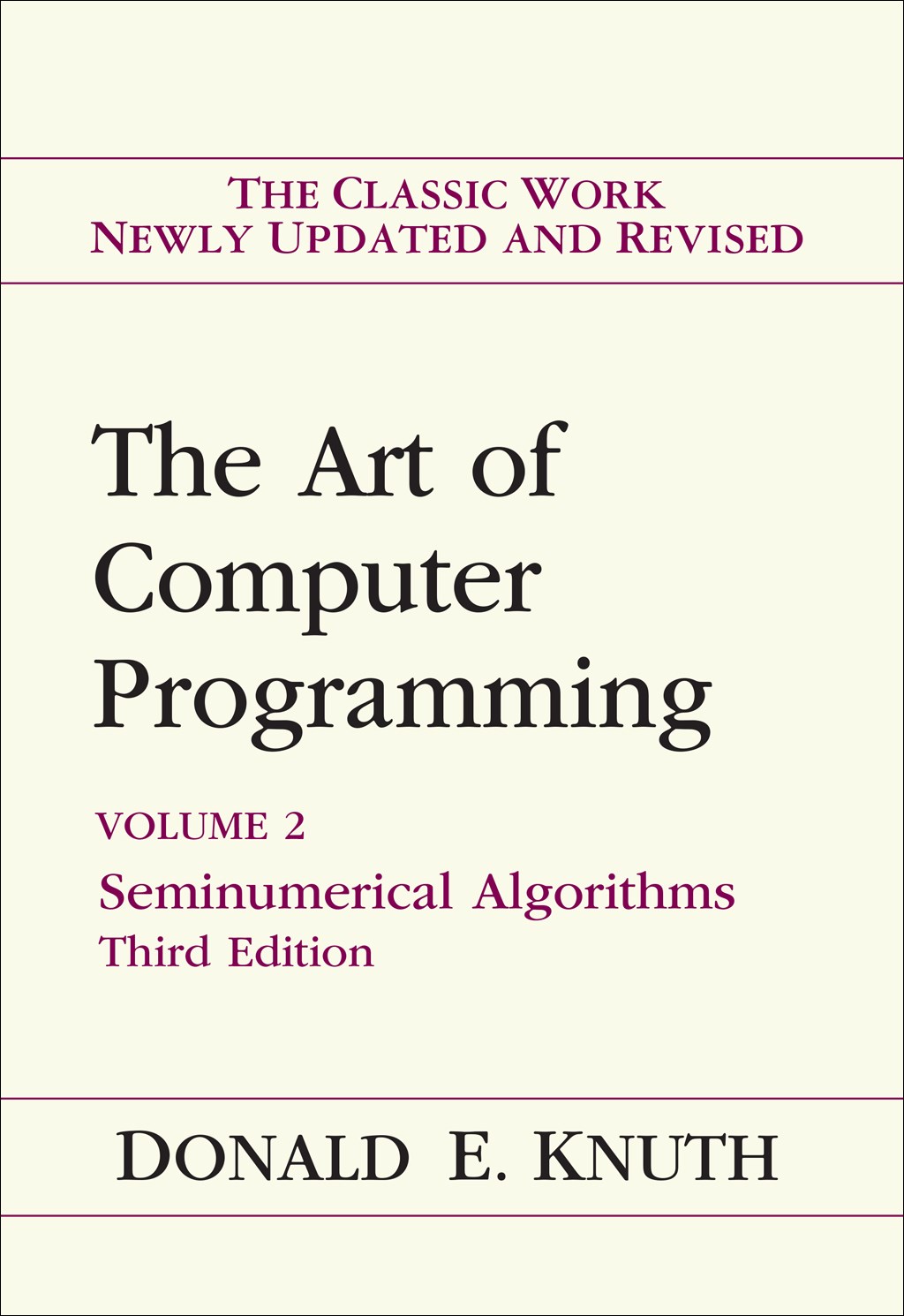 The second volume offers a complete introduction to the field of seminumerical algorithms, with separate chapters on random numbers and arithmetic. The book summarizes the major paradigms and basic theory of such algorithms, thereby providing a comprehensive interface between computer programming and numerical analysis. Particularly noteworthy in this third edition is Knuth's new treatment of random number generators, and his discussion of calculations with formal power series.

Other Types of Random Quantities.

What Is a Random Sequence?

How Fast Can We Multiply?


Appendix A. Tables of Numerical Quantities.

Appendix B. Index to Notations.

O dear Ophelia!
I am ill at these numbers:
I have not art to reckon my groans.
—Shakespeare, "Hamlet", Act II, Scene 2, Line 120

The algorithms discussed in this book deal directly with numbers; yet I believe they are properly called seminumerical, because they lie on the borderline between numeric and symbolic calculation. Each algorithm not only computes the desired answers to a numerical problem, it also is intended to blend well with the internal operations of a digital computer. In many cases people are not able to appreciate the full beauty of such an algorithm unless they also have some knowledge of a computer's machine language; the efficiency of the corresponding machine program is a vital factor that cannot be divorced from the algorithm itself. The problem is to find the best ways to make computers deal with numbers, and this involves tactical as well as numerical considerations. Therefore the subject matter of this book is unmistakably a part of computer science, as well as of numerical mathematics.

There is a noticeably higher percentage of mathematical material in this book than in other volumes of this series, because of the nature of the subjects treated. In most cases the necessary mathematical topics are developed here starting almost from scratch (or from results proved in Volume 1), but in several easily recognizable sections a knowledge of calculus has been assumed.

This volume comprises Chapters 3 and 4 of the complete series. Chapter 3 is concerned with "random numbers": It is not only a study of various ways to generate random sequences, it also investigates statistical tests for randomness, as well as the transformation of uniform random numbers into other types of random quantities; the latter subject illustrates how random numbers are used in practice. I have also included a section about the nature of randomness itself. Chapter 4 is my attempt to tell the fascinating story of what people have discovered about the processes of arithmetic, after centuries of progress. It discusses various systems for representing numbers, and how to convert between them; and it treats arithmetic on floating point numbers,high-precision integers, rational fractions, polynomials, and power series, including the questions of factoring and finding greatest common divisors.

Each of Chapters 3 and 4 can be used as the basis of a one-semester college course at the junior to graduate level. Although courses on "Random Numbers"and on "Arithmetic" are not presently a part of many college curricula, I believe the reader will find that the subject matter of these chapters lends itself nicely to a unified treatment of material that has real educational value. My own experience has been that these courses are a good means of introducing elementary probability theory and number theory to college students. Nearly all of the topics usually treated in such introductory courses arise naturally in connection with applications, and the presence of these applications can be an important motivation that helps the student to learn and to appreciate the theory. Furthermore, each chapter gives a few hints of more advanced topics that will whet the appetite of many students for further mathematical study.

For the most part this book is self-contained, except for occasional discussions relating to the MIX computer explained in Volume 1. Appendix B contains a summary of the mathematical notations used, some of which are a little different from those found in traditional mathematics books.

Preface to the Third Edition
When the second edition of this book was completed in 1980, it represented thefirst major test case for prototype systems of electronic publishing called TeX and METAFONT. I am now pleased to celebrate the full development of those systems by returning to the book that inspired and shaped them. At last I am able to have all volumes of The Art of Computer Programming in a consistent format that will make them readily adaptable to future changes in printing and display technology. The new setup has allowed me to make many thousands of improvements that I have been wanting to incorporate for a long time.

In this new edition I have gone over every word of the text, trying to retain the youthful exuberance of my original sentences while perhaps adding some more mature judgment. Dozens of new exercises have been added; dozens of old exercises have been given new and improved answers. Changes appear everywhere, but most significantly in Sections 3.5 (about theoretical guarantees of randomness), 3.6 (about portable random-number generators), 4.5.2 (about the binary gcd algorithm), and 4.7 (about composition and iteration of power series).

The Art of Computer Programming is, however, still a work in progress. Research on seminumerical algorithms continues to grow at a phenomenal rate. Therefore some parts of this book are headed by an "under construction" icon, to apologize for the fact that the material is not up-to-date. My files are bursting with important material that I plan to include in the final, glorious, fourth edition of Volume 2, perhaps 16 years from now; but I must finish Volumes 4 and 5 first, and I do not want to delay their publication any more than absolutely necessary.

I am enormously grateful to the many hundreds of people who have helped me to gather and refine this material during the past 35 years. Most of the hard work of preparing the new edition was accomplished by Silvio Levy, who expertly edited the electronic text, and by Jeffrey Oldham, who converted nearly allof the original illustrations to METAPOST format. I have corrected every error that alert readers detected in the second edition (as well as some mistakes that, alas, nobody noticed); and I have tried to avoid introducing new errors in the new material. However, I suppose some defects still remain, and I want to fix them as soon as possible. Therefore I will cheerfully pay $2.56 to the first finder of each technical, typographical, or historical error. The Web page cited on page iv contains a current listing of all corrections that have been reported to me.

When a book has been eight years in the making,
there are too many colleagues, typists, students,
teachers, and friends to thank.
Besides, I have no intention of giving such people
the usual exoneration from responsibility for errors which remain.
They should have corrected me!
And sometimes they are even responsible for ideas
which may turn out in the long run to be wrong.
Anyway, to such fellow explorers, my thanks.
— Edward F. Campbell, Jr. (1975)