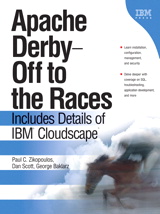 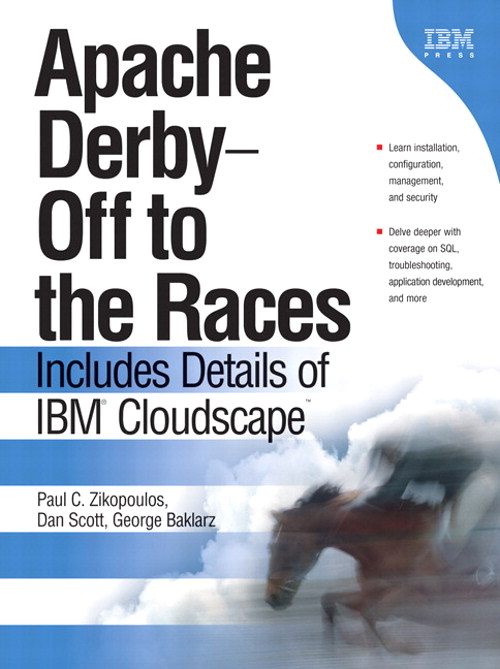 Apache Derby -- Off to the Races: Includes Details of IBM Cloudscape

Apache Derby is the world's only enterprise class open source, pure Java, fully transactional relational database. It's small enough to be embedded directly into your Java applications, providing a local data store that requires no DBA support. Powerful enough to support a wide range of traditional applications, this database ships as the default database for WebSphere Application Server and more than fifty other IBM software products. Apache Derby is built on the mature IBM Cloudscape code base IBM recently contributed to the open source community. The IBM Cloudscape code was nominated and won Developer.com's Product of the Year 2005 award.

Now, IBM's own database experts have written a comprehensive guide to making the most of Apache Derby—and its commercial counterpart, IBM Cloudscape— in any development or production environment. This book systematically introduces the Apache Derby/IBM Cloudscape technology: where it fits and how to install and configure it—and how to build robust business applications and Web services with it, one step at a time.

This book has a companion Web site that contains links to the IBM version of Apache Derby and other downloadable code, documentation, articles, and other resources to give the reader a deeper understanding of some of the features available in Apache Derby.

Eclipse Demo - A demonstration of the Eclipse plug-in for Apache Derby.
http://www-128.ibm.com/developerworks/db2/library/techarticle/dm-0509cline/

YMLD Database YMLD-Database.zip - SQL script for creating the Your Momma Loves Drama database. The directory also includes a generated copy of the database.

Further Steps with Derby: Defining and Accessing Your Data

Further Steps with Derby: Derby Embedded in a Browser

Getting Started with Derby

On Your Marks ... Get Set ... Go!!!: An Introduction to the Apache Derby and IBM Cloudscape Community

12. "Your Momma Loves Drama" in Windows.