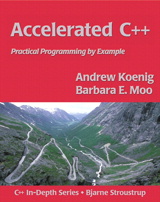 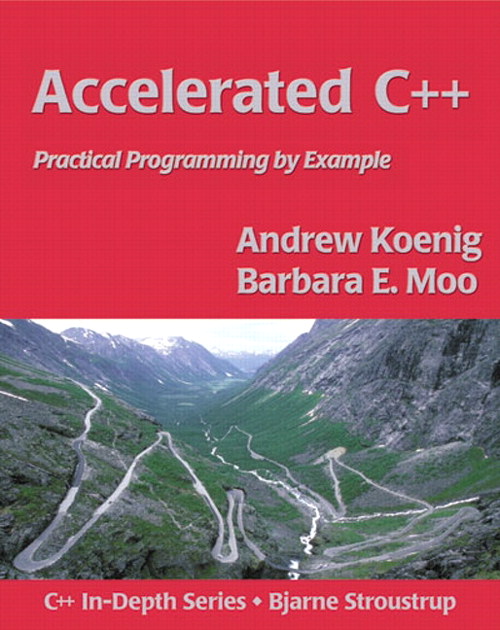 Want to learn how to program in C++ immediately? Want to start writing better, more powerful C++ programs today? Accelerated C++'s uniquely modern approach will help you learn faster and more fluently than you ever believed possible. Based on the authors' intensive summer C++ courses at Stanford University, Accelerated C++ covers virtually every concept that most professional C++ programmers will ever use -- but it turns the "traditional" C++ curriculum upside down, starting with the high-level C++ data structures and algorithms that let you write robust programs immediately. Once you're getting results, Accelerated C++ takes you "under the hood," introducing complex language features such as memory management in context, and explaining exactly how and when to use them. From start to finish, the book concentrates on solving problems, rather than learning language and library features for their own sake. The result: You'll be writing real-world programs in no time -- and outstanding code faster than you ever imagined.

Using the Standard Library for Output.

Writing an Unknown Number of Rows.

3. Working with Batches of Data.

Using Medians Instead of Averages.

Putting it All Together.

Using Iterators Instead of Indices.

A Note on Performance.


What is a Generic Function?

Some Conversions are Hazardous.

Using Inheritance to Solve Our Problem.


Handles that Copy their Objects.

Handles that Let you Decide When to Share Data.

An Improvement on Controllable Handles.


Use the Abstractions You Have.

A new approach to C++ programming

We assume that you want to learn quickly how to write useful C++ programs. Therefore, we start by explaining the most useful parts of C++. This strategy may seem obvious when we put it that way, but it has the radical implication that we do not begin by teaching C, even though C++ builds on C. Instead, we use high-level data structures from the start, explaining only later the foundations on which those data structures rest. This approach lets you to begin writing idiomatic C++ programs immediately.

Because this book teaches C++ programming, not just features, it is particularly useful for readers who already know some C++, and who want to use the language in a more natural, effective style. Too often, people new to C++ learn the language mechanics without learning how to apply the language to everyday problems.


Our approach works--for beginners and experienced programmers
We used to teach a week-long intensive C++ course every summer at Stanford University. We originally adopted a traditional approach to that course: Assuming that the students already knew C, we started by showing them how to define classes, and then moved systematically through the rest of the language. We found that our students would be confused and frustrated for about two days--until they had learned enough that they could start writing useful programs. Once they got to that point, they learned quickly.

When we got our hands on a C++ implementation that supported enough of what was then the brand-new standard library, we overhauled the course. The new course used the library right from the beginning, concentrated on writing useful programs, and went into details only after the students had learned enough to use those details productively.

The results were dramatic: After one day in the classroom, our students were able to write programs that had taken them most of the week in the old course. Moreover, their frustration vanished.


Abstraction
Our approach is possible only because C++, and our understanding of it, has had time to mature. That maturity has let us ignore many of the low-level ideas that were the mainstay of earlier C++ programs and programmers.

The ability to ignore details is characteristic of maturing technologies. For example, early automobiles broke down so often that every driver had to be an amateur mechanic. It would have been foolhardy to go for a drive without knowing how to get back home even if something went wrong. Today's drivers don't need detailed engineering knowledge in order to use a car for transportation. They may wish to learn the engineering details for other reasons, but that's another story entirely.

We define abstraction as selective ignorance--concentrating on the ideas that are relevant to the task at hand, and ignoring everything else--and we think that it is the most important idea in modern programming. The key to writing a successful program is knowing which parts of the problem to take into account, and which parts to ignore. Every programming langauge offers tools for creating useful abstractions, and every successful programmer knows how to use those tools.

We think abstractions are so useful that we've filled this book with them. Of course, we don't usually call them abstractions directly, because they come in so many forms. Instead, we refer to functions, data structures, classes, and inheritance--all of which are abstractions. Not only do we refer to them, but we use them throughout the book.

If abstractions are well designed and well chosen, we believe that we can use them even if we don't understand all the details of how they work. We do not need to be automotive engineers to drive a car, nor do we need to understand everything about how C++ works before we can use it.

This statement is not as paradoxical as it sounds. No book this size can contain everything you'll ever need to know about C++, because different programmers and applications require different knowledge. Therefore, any book that covers all of C++--such as Stroustrup's The C++ Programming Language (Addison-Wesley, 2000)--will inevitably tell you a lot that you don't need to know. Someone else will need it, even if you don't.

On the other hand, many parts of C++ are so universally important that it is hard to be productive without understanding them. We have concentrated on those parts. It is possible to write a wide variety of useful programs using only the information in this book. Indeed, one of our reviewers, who is the lead programmer for a substantial commercial system written in C++, told us that this book covers essentially all of the facilities that he uses in his work.

We cover only standard C++, and ignore proprietary extensions. This approach has the advantage that the programs that we teach you to write will work just about anywhere. However, it also implies that we do not talk about how to write programs that run in windowing environments, because such programs are invariably tied to a specific environment, and often to a specific vendor. If you want to write programs that will work only in a particular environment, you will have to turn elsewhere to learn how to do so--but don't put this book down quite yet! Because our approach is universal, you will be able to use everything that you learn here in whatever environments you use in the future. By all means, go ahead and read that book about GUI applications that you were considering--but please read this one first.

A note to experienced C and C++ programmers


When you learn a new programming language, you may be tempted to write programs in a style that is familiar from the languages that you already know. Our approach seeks to avoid that temptation by using high-level abstractions from the C++ standard library right from the start. If you are already an experienced C or C++ programmer, this approach contains some good news and some bad news--and it's the same news. The news is that you are likely to be surprised at how little of your knowledge will help you understand C++ as we present it. You will have more to learn at first than you might expect (which is bad), but you will learn more quickly than you might expect (which is good). In particular, if you already know C++, you probably learned first how to program in C, which means that your C++ programming style is built on a C foundation. There is nothing wrong with that approach, but our approach is so different that we think you'll see a side of C++ that you haven't seen before.

Of course, many of the syntactic details will be familiar, but they're just details. We treat the important ideas in a completely different order from what you've probably encountered. For example, we don't mention pointers or arrays until Chapter 10, and we're not even going to discuss your old favorites, printf and malloc, at all. On the other hand, we start talking about the standard-library string class in Chapter 1. When we say we're adopting a new approach, we mean it!


Structure of this book
You may find it convenient to think of this book as being in two parts. The first part, through Chapter 7, concentrates on programs that use standard-library abstractions. The second part, starting with Chapter 8. talks about defining your own abstractions.

Presenting the library first is an unusual idea, but we think it's right. Much of the C++ language--especially the harder parts--exists mostly for the benefit of library authors. Library users don't need to know those parts of the language at all. By ignoring those parts of the language until the second part of the book, we make it possible to write useful C++ programs much more quickly than if we had adopted a more conventional approach.

Once you have understood how to use the library, you will be ready to learn about the low-level facilities on which the library is built, and how to use those facilities to write your own libraries. Moreover, you will have a feeling for how to make a library useful, and when to avoid writing new library code altogether.

Although this book is smaller than many C++ books, we have tried to use every important idea at least twice, and key ideas more than that. As a result, many parts of the book refer to other parts. These references look like §39.4.3/857, which refers to text on page 857 that is part of section 39.4.3--or at least it would do so if this book had that many sections or pages. The first time we explain each idea, we mention it in bold italic type to make it easy to find and to call your attention to it as an important point.

Every chapter (except the last) concludes with a section called "Details." These sections serve two purposes: They make it easy to remember the ideas that the chapter introduced, and they cover additional, related material that we think you will need to know eventually. We suggest that you skim these sections on first reading, and refer back to them later as needed.

The two appendices summarize and elucidate the important parts of the language and library at a level of detail that we hope will be useful when you are writing programs.


Getting the most out of this book
Every book about programming includes example programs, and this one is no different. In order to understand how these programs work, there is no substitute for running them on a computer. Such computers abound, and new ones appear constantly--which means that anything we might say about them would be inaccurate by the time you read these words. Therefore, if you do not yet know how to compile and execute a C++ program, please visit http://www.acceleratedcpp.com and see what we have to say there. We will update that website from time to time with information and advice about the mechanics of running C++ programs. The site also offers machine-readable versions of some of the example programs, and other information that you might find interesting.