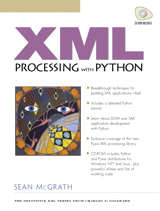 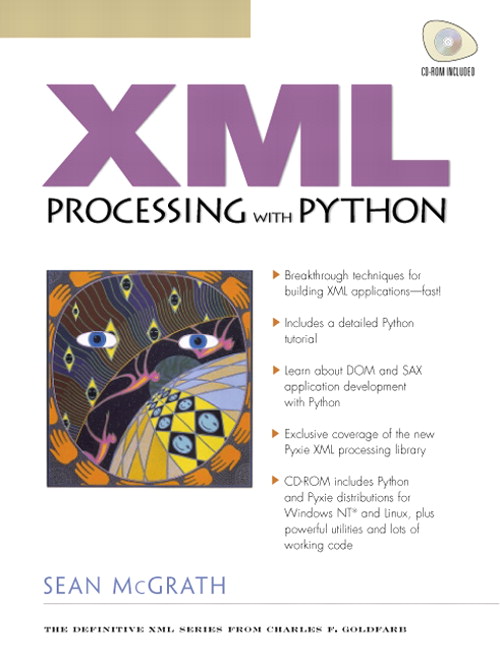 "XML processing is the newest required skill for webmasters and application developers. The Python language and Sean McGrath's book make it fun to learn and easy to do."
— Charles F. Goldfarb

When it comes to XML processing, Python is in a league of its own.

If you're doing XML development without Python, you're wasting time! Python offers outstanding productivity — especially in the areas that matter most to XML developers, such as XML parsing, DOM/SAX implementations, string processing, and Internet APIs.

And now there's Pyxie — the new open source library that makes Python XML processing even easier and more powerful. In XML Processing with Python, top XML developer Sean McGrath delivers the hands-on explanations and examples you need to get results with Python and Pyxie fast — even if you've never used them before!

Elegant, easy, powerful and fun, Python helps you build world-class XML applications in less time than you ever imagined. If you know XML, one book has all the techniques, code, and tools you'll need to process it: XML Processing with Python.


Purpose of This Book. The Pyxie Open Source Project. Prerequisites. How to Read This Book. A Note about Platforms. Structure of Code Samples. And Finally.


Getting a Python Distribution. Installing the Software. Testing the Python Installation. Using a Python Program File. In Conclusion.


Modelling a Node. Navigating a Tree. Building xTree Structures. Building an xTree By Using PYX. A Test Harness for Pyxie. Handling Line Ends. A Syntax for Tree Processing with xgrep. Adding Support for Attributes. Some Utility Bits and Pieces. Implementing XMLGrepTree. A Standardized Tree-Driven XML Processing Model. Advantages and Disadvantages of Tree-Driven XML Processing. Some Examples. Bringing It All Together.

Appendix A: An Overview of Python for Java Programmers.

Appendix B: An Overview of Python for Perl Programmers.

XML is everywhere on the Web these days. Structured data of all shapes and sizes such as financial transactions, news feeds, health care records, even HTML is metamorphosing into XML. There is just no getting away from it!

I'm glad actually. The fact that XML is everywhere is a fundamentally good thing in my opinion.

Why? Well, thanks to XML, the Web is in transition from an enormous repository of display-oriented, unstructured, low-level data (HTML) into a repository of structured, heterogenous, content-oriented information (XML). This new, improved World Wide Web, housed on a bedrock of XML, presents programmers with awesome opportunities for innovative software development.

The fact that the "L" in XML stands for "Language" has been the source of some confusion. It is important to remember that XML is a data representation technology. It is not, by any stretch of the imagination, a programming language. Its strength lies in its ability to simply and cleanly represent complex hierarchical data structures. As you know, XML is a World Wide Web Consortium (W3C) recommendation for structured data representation. There is no such thing as a W3C-recommended XML programming language. Choice of a programming tool is entirely within the hands of the individual developer. In making a selection, an embarrassment of riches presents itself to us. We have the Java programming language, Perl, Tcl, C++, C, JavaScript, Visual Basic, Delphi, and of course Python. Each language has its benefits and its drawbacks as an XML-processing tool.

Well, choosing a programming language is an inexact science at best and is influenced by many factors that are technical, commercial, emotional, futuristic and political in nature. Even serendipity has a role to play.

For my part, standing here (actually sitting here) at the start of the 21st century, I can safely say, without fear of contradiction, that no programming language I know comes close to Python for XML processing.

"Strong words," you may say, but then again, I am only speaking about the languages I know, not the ones I don't.

This book has essentially one purpose: To give you all the information, explanations, working examples, and software packages (on the accompanying CD-ROM) you need to start writing XML-processing applications in Python fast.

This book will not slow you down with intricate technical details of either Python or XML. That is not to say that these things are not important! They are very important, but they are not discussed in this book. The reason for this omission is that I believe a pragmatic treatment of a subject such as Python/XML is the best way to become productive quickly. I believe that comprehensive coverage of the details too early on in the exploration of a topic like this just gets in the way. So, in this book, comprehensive coverage takes second place to working examples of real-world Python/XML programming. I will provide plenty of pointers to more detailed information for those of you who wish to dig deeper.

By the time you read this, the Pyxie project will have been launched at http://www.pyxie.org. It contains all the source code from this book along with more demo programs and applications for Windows and Linux.

This book assumes that you have a high-level understanding of the ideas and syntax of XML. In particular, it would be helpful if you know the following:

If you feel the need to brush up your XML, you might like to read my book XML by Example: Building eCommerce Applications available in this series.

This book assumes that you have some previous programming experience in a high-level language. Some exposure to object-oriented programming is desirable but not critical. If you have any exposure at all to the Java programming language, Perl, awk, Tcl, C++, C, JavaScript, Visual Basic, Delphi, or shell scripting languages, you are in good shape to attack this book.

If you are a seasoned programmer in one or more languages, I believe you will be pleasantly surprised at how easy, natural, and (okay, I'll say it) beautiful Python is.

This book is intended to be read from start to finish. One of the techniques I have used to avoid long tracts of narrative about Python language features or support libraries is that I explain them as they pop up in the course of writing real programs.

As a consequence, skipping material might lead to gaps in the presentation of Python features. Even if you are very familiar with the subject matter in a section of the book, please give it a high-level scan to ensure that you pick up on any Python nuggets buried inside.

My day-to-day programming environment is a mixture of Windows NT 4.0 and Red Hat Linux 6.0. These are the two platforms that the software presented in this book has been developed and tested on.

Although the book focuses on Windows NT and Linux, the Python programs in the book and in the CD-ROM's root directory should run just fine on any Win32 or Unix platform. There will obviously be the usual assortment of differences to do with default installation directories, differing shells, and so on. I have not attempted to cover all the eventualities in this book. To do so would make it twice as long and ten times more tedious to read.

I am a programmer who learns best by example. If this is a reasonable description of how you learn best, you are in the right place.

If you have read this far, you will have surmised that this book is going to take a no-nonsense, snappy, and purposeful approach to XML processing with Python.

Learn Enough HTML, CSS and Layout to be Dangerous: An Introduction to Modern Website Creation and Templating Systems