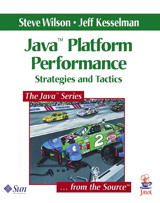 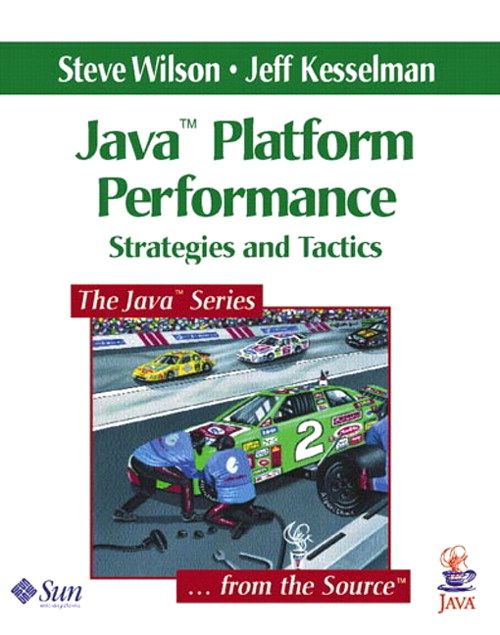 Direct from Sun's Java Performance Team, this is a comprehensive field manual full of battle-tested strategies and tactics for developing high-performance applications and applets with Java technology. It covers every aspect of Java performance, including speed, scalability, RAM footprint, startup time, and user-perceived performance factors. Part I covers the crucial process issues associated with Java optimization, outlining how performance tuning fits into the software development process, showing how to use benchmarks and profiling tools to identify hot spots and bottlenecks, and presenting general strategies for enhancing the performance of Java technology-based systems. In Part II, the authors present a wide array of concrete optimization techniques. The book contains detailed appendices on garbage collection and the Java HotSpot Virtual Machine, written to address key performance questions.

What Contributes to Footprint?

Reducing the Number of Classes.

7. Object Mutability: Strings and Other Things.

Mutable Objects in AWT and Swing.

Small Objects and the Modern JVM.

References on Algorithms and Data Structures.

A. The Truth About Garbage Collection.


Why Should You Care About Garbage Collection?

The Guarantees of GC.

B. The Java HotSpot Virtual Machine.

In 1997, I was hired as a contractor to work on the Java(TM) Foundation Classes (JFC) Swing toolkit (Swing). This was an ambitious endeavor--Swing was slated to become the new standard for developing Graphical User Interfaces (GUIs) with the Java programming language. Prior to the release of Swing, the only GUI toolkit available with the Java platform was the Abstract Window Toolkit (AWT), a fairly primitive GUI toolkit by 1990s standards. While AWT was hobbled by a "lowest common denominator" design, Swing was designed to be a state-of-the-art toolkit. Written entirely in the Java programming language, it offered a powerful Model-View architecture, an advanced widget set, and a revolutionary pluggable look-and-feel (PLAF) system. When JFC was released in mid-1998, it was quickly adopted by thousands of eager developers.

As with any successful new product, along with stories of success came some bitter complaints. Some developers complained about architectural and philosophical issues. Others complained about bugs or the lack of a particular feature. However, the complaints I personally found most troubling were that programs written with Swing were slow.

I convinced my manager to let me spend a week looking into Swing's performance issues, downloaded a trial copy of a profiling package, and started poking at different parts of the toolkit.

It turned out that there were several areas where performance improvements could be made relatively easily. At the end of the week, I wrote a report on my findings and sent it to the rest of the Swing engineering team. Other members of the team got caught up in the spirit of performance tuning and began doing their own analyses. Over the next few months, I spent more and more of my time working on analysis and tuning and the Swing team made numerous performance enhancements. Many of the techniques described in this book are based on the knowledge gained while we were tuning Swing.

In late 1998, we shipped a new version of Swing that was more than twice as fast for typical tasks than the previous release. However, while many developers were pleased with the improvements, we were troubled to see that we still received numerous complaints about performance. Clearly the problem was more complex than we first thought.

I joined the performance team in Sun's Java Software unit in late 1998 and worrying about performance issues became my full-time job. In an effort to better understand the performance issues we and our developers face, I spend a lot of time talking with developers who are working on serious, real-world Java technology-based systems. Developers sometimes point out areas where changes in the libraries or VM could improve the performance of their programs. Part of my group's charter is to help make sure those changes, when appropriate, make their way into the runtime environment.

When working with developers, we also often find areas where changes to their program code can improve performance. We've found that there are a number of common mistakes and misconceptions about the performance characteristics of Java technologies and even about performance tuning in general.

The goal of this book is to share what we've learned about performance tuning Java technology-based systems with a wide audience. We hope that it will prove to be a valuable reference for you.


The higher-level information in the Strategies part is intended for a broad audience, including software engineers, engineering managers, technical leads, and quality assurance specialists involved in the development of Java technology-based solutions. The information in the Tactics part is geared toward intermediate to advanced developers familiar with the Java programming language who are looking for concrete coding techniques they can use to speed up their software.

The Strategies chapters are best read as a single piece, but the Tactics part does not need to be read linearly--you can go directly to whatever topic interests you most.

The two appendices at the end of the book provide information about garbage collection and the HotSpot(TM) virtual machine (VM) and how they can impact performance.

Unless otherwise noted, all performance measurements described in this book were run on a pre-release build of the Java 2 Standard Edition (J2SE) v. 1.3 using the HotSpot Client VM on the Microsoft Windows operating system.

Specific performance results are only representative of the configuration on which they are run. Factors such as the CPU, hard disk, operating system, and Java runtime environment (JRE) can all impact performance--keep in mind that the same benchmarks run under different configurations might yield substantially different results.

Complete code for the snippets, sample programs, utilities, and benchmarks used in this book is available online at http://java.sun.com/docs/books/performance/

We would like to thank the many people who contributed to the success of this book.

Jon Kannegaard, Larry Abrahams, and Graham Hamilton provided the initial push that started this project. We especially need to thank Larry, who provided much needed management support throughout the project. Lisa Friendly and Tim Lindholm, editors of the Java Series, patiently guided two first-time authors through the process of making this book a reality. Mike Hendrickson and Julie DiNicola from Addison-Wesley were immensely helpful throughout the entire process.

Deborah Adair of The Design Cage served as part editor, part graphic designer, and part writing coach. We couldn't have finished the project without her help.

Hans Muller, the technical lead for Project Swing and the foremost expert on Swing's threading model, provided the material for Chapter 11, Writing Responsive User Interfaces with Swing. He spent many nights and weekends working on this chapter so the rest of us could better understand how to use threads in Swing programs.

Alan Sommerer contributed to the outline and organization of early drafts, ensuring that key concepts were not missed.

David Wilson and Doris Chen began writing a two-day training course on performance tuning about the same time we started working on this book. We exchanged many ideas with them and believe both the course and the book benefited.

Over the past year, Agnes Jacob introduced us to many developers who had performance-related issues. These experiences were invaluable in deciding what information to include in this book.

Since the Java platform was introduced in 1995 it has become highly popular among both programmers and the companies they work for because it facilitates the rapid development and deployment of new software. From the start, however, Java technology has been dogged with complaints about its speed. A recent search of the USENET group comp.lang.java.programmer resulted in nearly 3,000 articles that contained the words "Java" and "slow." Clearly, performance is an area of concern for many developers.

In the past few years, there have been numerous technological advances that have improved the performance of the Java platform. Just-in-time (JIT) compilers and advanced runtime systems, such as Sun's Java HotSpot Virtual Machine, have significantly improved performance. In addition, as Moore's Law dictates, computers continue to get more powerful every year. Today's average PC is an order of magnitude faster than the average PC at the time Java technology was first introduced. Despite these advances, complaints about the speed of Java technology-based programs persist.

When average hardware performance continues to get faster, and the core runtime technology continues to improve, why do so many developers continue to have performance issues? The answer turns out to be somewhat obvious. The software being developed for the Java platform today is much more complex than it was just a year or two ago. Developers are continuing to push the envelope--each time the tools improve, the scope and complexity of the applications being built with them increases. In short, the technology is fulfilling the promise that it's not just for "Dancing Duke" applets anymore.

Powerful Java technology-based enterprise systems are being deployed in situations where millions of dollars are riding on the system's success. Independent software vendors (ISVs) are replacing and trying to compete with solutions written with more traditional languages like C++.

Not only do today's Java applications go far beyond making Duke dance, these large-scale, mission-critical software solutions are more complex than anything many Java programmers have written in the past. As they continue to push the limits of the technology, developers are also being asked to solve increasingly difficult problems that push the limits of their experience.

Developing high-performance software in any language is not a trivial task. In addition to a thorough understanding of the language and libraries you're using, you need to know how to effectively fit performance tuning into your overall development process.