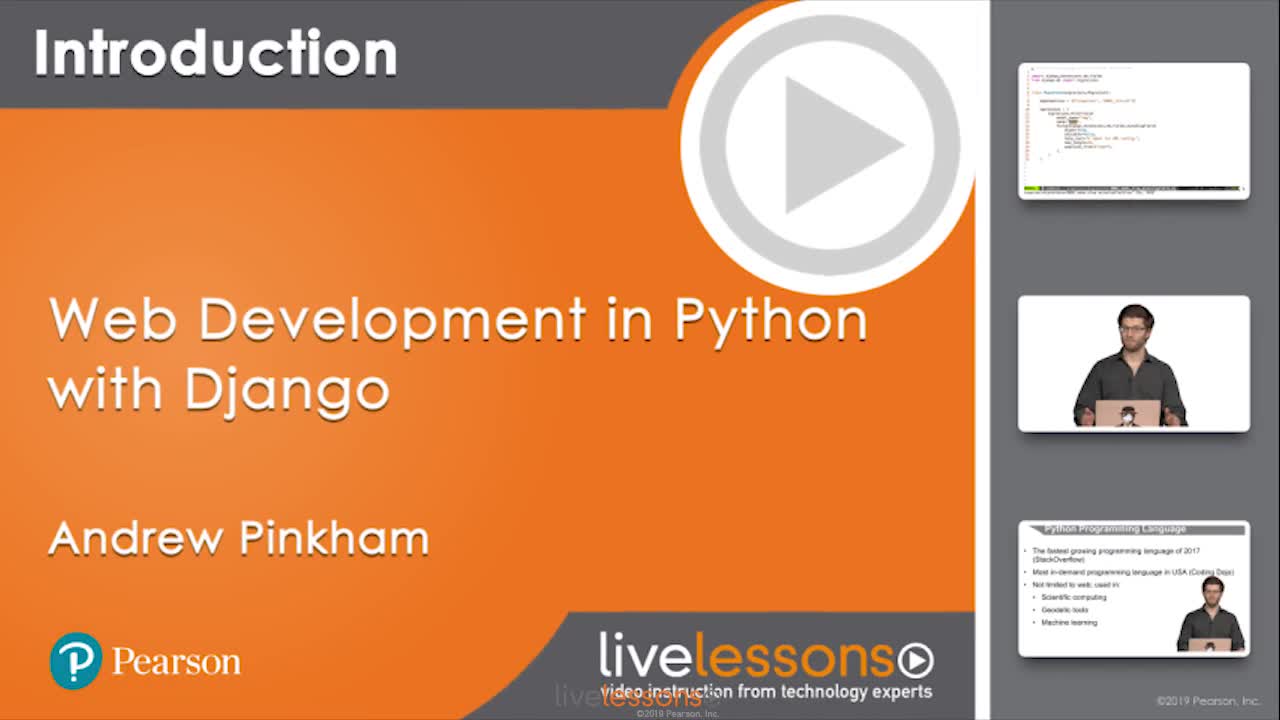 Web Development in Python with Django LiveLessons gets you up and running with the Django framework. You learn how to start Django projects and organize code using Django apps. You structure data and define behavior with Django models. You learn how to generate databases based on Django models, manipulate data in the database with Python, and manage a database with Django migrations. Display the data in your database in HTML using Django URL paths, Django views, and the Django Template Language; or display in JSON using Django Rest Framework’s (DRF) Serializers, Routers, and ViewSets. Securely receive, validate, and manipulate incoming user data in your Django Forms or in your DRF Serializers. You even learn how to run a development server inside of Docker. Finally, you learn how to deploy to the cloud in general and to Heroku specifically.
Skill Level

Lesson 2:  Prepare the Project and Manipulate Data
Lesson 2 addresses organizing data and getting data structured. Like building a house, where you begin with a foundation, Django and Python are the foundation for your project. Continuing the analogy, houses may or may not have basements. That should be planned up front, not decided later after the house is well under way. Structuring data models is similar. Not every web application needs data models, but if you are building a web application that needs them, you want to start developing that model from the start. You learn how to structure data in Django so that it generates your database automatically, setting yourself up for success when building out the rest of the application. Also, you learn how to use Docker to run a development server for your application.

Lesson 3:  Display Data via an API
In Lesson 3, you can now allow users to view the data in the database. You learn how to build API endpoints using Django Rest Framework APIViews, Serializers, and ModelSerializers, to display your data in JSON or other serialized formats, such as XML or YAML. You further learn to use Django Rest Framework’s generic views, such as the RetrieveAPIView and ListAPIView, to shorten your code.

Lesson 4:  Display Data in HTML Pages
In Lesson 4, you learn how to use Django to return HTML to display the data. Learn to use Django’s core triumvirate to generate and return HTML: Django views, URL paths, and the Django Template language. Build your application using both function views and class-based views. Learn to use Django shortcuts to make your life easier, and leverage Django generic class-based views to radically limit the amount of code you write.

Lesson 5:  Receive and Manipulate Data via an API
In Lesson 5, you build API endpoints that enable users to modify data on the server by handling the HTTP POST, PUT, PATCH, and DELETE methods by modifying Django Rest Framework APIViews to leverage ModelSerializers. Learn to avoid work and build more quickly by using generic API views such as the CreateAPIView, DestroyAPIView, and even the RetrieveUpdateDestroyAPIView.

Lesson 6:  Receive and Manipulate Data via HTML Forms
Lesson 6 uses Django Forms and ModelForms to render HTML forms in the Django Template Language and then enable the processing and validation of data submitted by users through the forms.

Lesson 7:  Deploy!
Lesson 7 covers how to deploy your application to the cloud. The lesson discusses the different types of clouds and what works best with different types of applications and different kinds of organizations. It covers modifications to Django for deployments generally and for deployment to Heroku specifically. You also actually deploy the application. Finally, the lesson covers how you might have done things differently in a real application setting, using other tools and working top down rather than bottom up, the approach taken for purposes of the course.

Video Lessons are available for download for offline viewing within the streaming format. Look for the green arrow in each lesson.