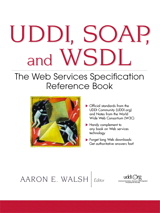 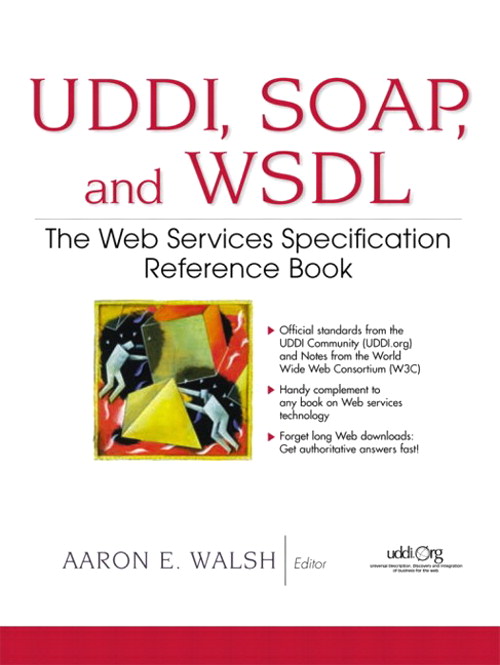 The one-stop reference to the three standards driving the Web services revolution.

Web services are some of today's hottest Internet development technologies. UDDI, SOAP, and WSDL are the key specifications driving that revolution. For the first time ever, an authoritative one-stop technical specification reference exists in printed form for every developer who intends to use these standards. UDDI, SOAP, and WSDL: The Web Services Specification Reference Book presents the official text of all three standards from the UDDI.org and W3C—conveniently organized, formatted, and fully indexed.

A perfect companion to any other book on Web services technology, this is your definitive standards reference—always at hand, with no time-consuming Internet downloads needed.

The UDDI documents in this book appear courtesy of the UDDI Community (UDDI.org), with thanks in particular to Tom Glover. As UDDI.org Program Manager, Tom helped guide the UDDI portion of this book through the publication production on behalf of the UDDI Community, an effort for which I am grateful. The SOAP and WSDL specifications, meanwhile, are taken directly from corresponding World Wide Web (W3C) Notes. Thanks to Janet Daly and Joseph M. Reagle, the W3CUs SOAP and WSDL Notes appear alongside UDDI, which together comprise the three Web services technologies detailed in this book.

As this book went to print, the term "Web services" was sweeping through the Internet and Web development communities, carrying with it the promise of a new and improved way of conducting business over public and private communications networks. Generally speaking, Web services refer to loosely coupled software applications distributed across the Internet and/or World Wide Web. Unlike traditional distributed software applications, for which the distributed components are tightly bound to the application using them, Web services are entirely self-contained and self-describing. As such, a Web service is a fully encapsulated, modular unit of application logic that can be found and used by other applications without requiring an intimate knowledge of the inner working of the service.

Based on well-known open standards such as Extensible Markup Language (XML) and Hypertext Transfer Protocol (HTTP), Web services can be mixed and matched with other Web services as needed. This enables applications that use Web services to orchestrate them into a series of rich and increasingly complex transactions. A long-promised but only recently realized Holy Grail of computing, Web services usher in an era of truly componentized, reusable, and distributed software on a grand scale that weUve not seen before today.

UDDI, SOAP, and WSDL are central to the emerging Web services paradigm. They are independent, yet inter-related technologies that are typically used together. UDDI provides an open, platform-independent framework for describing services, discovering businesses, and integrating services over the Internet. In addition, UDDI is an operational registry of available services that can be thought of as a modern-day "yellow pages" directory specifically for Web services.

Access to and from the UDDI registry typically takes place with SOAP, which is a lightweight XML-based protocol used to exchange information in a decentralized, distributed environment. WSDL, meanwhile, is an XML-based service description language that complements UDDI by providing a uniform mechanism for describing services and network protocol bindings.

Taken together, the UDDI, SOAP, and WSDL specifications detailed in this book provide a solid foundation upon which many legacy applications will be rebuilt, and countless new and as-of-yet unimagined software products will be built from the ground up. I hope that you find them as invaluable in your own Web services development efforts as I imagine they will be.

The Web services specifications in this book are organized into three distinct parts, one each for UDDI, SOAP, and WSDL. Following is a brief description of each part and the chapters they contain.

As a high-level overview of UDDI, this chapter explains that UDDI is focused on sharing business information, making it easier for you to publish your preferred means of conducting business, find trading partners and have them find you, and interoperate with these trading partners over the Internet.

Note: This chapter is a white paper, not a formal part of the UDDI specification.

Building on the high-level overview presented in Chapter 1, this chapter digs deeper into UDDI and its capabilities. Starting with the concept that UDDI is a specification for distributed Web-based information registries of Web services, and also a publicly accessible set of implementations of the specification that allow businesses to register information about the Web services they offer so that other businesses can find them, this chapter explains that Web services are the next step in the evolution of the Web itself. This chapter explains how UDDI registries are used to promote and discover distributed Web services, thereby allowing programmable elements to be placed on Web sites where others can access distributed behaviors.

Note: This chapter is a white paper, not a formal part of the UDDI specification.

This chapter describes the programming interface that is exposed by all instances of the UDDI registry. The programmatic interface provided for interacting with systems that follow the UDDI specifications makes use of XML and SOAP (a specification for using XML in simple message-based exchanges). The UDDI ProgrammerUs API Specification defines approximately 30 SOAP messages that are used to perform inquiry and publishing functions against any UDDI-compliant business registry.

This document outlines the details of each XML structure associated with the approximately 30 SOAP messages described in Chapter 3 that are used to perform inquiry and publishing functions against any UDDI-compliant business registry. This chapter is co-requisite to the UDDI XML schema documents described in Chapters 5 and 6.

Part 2 covers SOAP 1.1. SOAP is a lightweight protocol for exchanging information in a decentralized, distributed environment. It is an XML-based protocol that consists of three parts: an envelope that defines a framework for describing what is in a message and how to process it, a set of encoding rules for expressing instances of application-defined data types, and a convention for representing remote procedure calls and responses.

Note: The SOAP schemas that appear in these chapters are based on schemas originally submitted to the World Wide Web Consortium (W3C) by the same companies that submitted the SOAP 1.1 specification; see http://www.w3.org/Submission/2000/05/ for the original schemas.

This chapter contains the external hyperlinks that appear in the text of the SOAP 1.1 specification in Chapter 7.

Note: The schema in this chapter is based on the schema submission found at http://www.w3.org/Submission/2000/05/

Note: The schema in this chapter is based on the schema submission found at http://www.w3.org/Submission/2000/05/

Part 3 covers WSDL 1.1. WSDL is an XML format for describing network services as a set of endpoints operating on messages containing either document-oriented or procedure-oriented information. The operations and messages are described abstractly, and then bound to a concrete network protocol and message format to define an endpoint. Related concrete endpoints are combined into abstract endpoints (services).

This chapter contains the external hyperlinks that appear in the text of the WSDL 1.1 specification in Chapter 11.