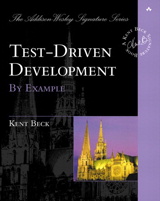 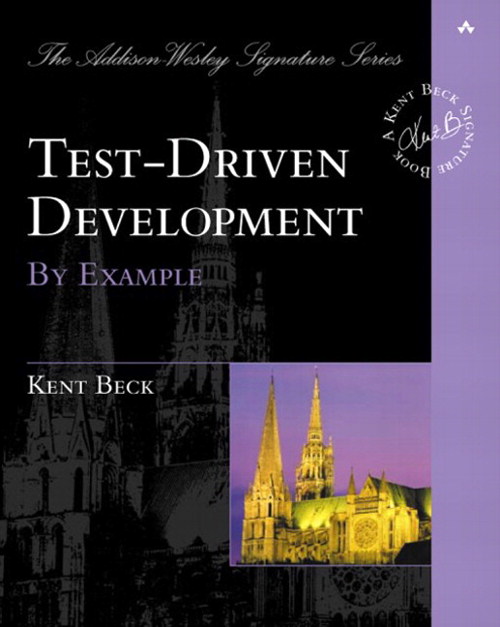 ° Begin to write automated tests that allow you to "test on the fly," and learn to optimize the practice of refactoring

° Example-driven teaching; Kent Beck's step-by-step instruction will have you using TDD to further your projects

Quite simply, test-driven development is meant to eliminate fear in application development. While some fear is healthy (often viewed as a conscience that tells programmers to "be careful!"), the author believes that byproducts of fear include tentative, grumpy, and uncommunicative programmers who are unable to absorb constructive criticism. When programming teams buy into TDD, they immediately see positive results. They eliminate the fear involved in their jobs, and are better equipped to tackle the difficult challenges that face them. TDD eliminates tentative traits, it teaches programmers to communicate, and it encourages team members to seek out criticism However, even the author admits that grumpiness must be worked out individually! In short, the premise behind TDD is that code should be continually tested and refactored. Kent Beck teaches programmers by example, so they can painlessly and dramatically increase the quality of their work.

Test Driven Development: Equality for All


I. THE MONEY EXAMPLE.

Two simple rules, but they generate complex individual and group behavior. Some of the technical implications are:

The two rules imply an order to the tasks of programming:
1. Red—write a little test that doesn’t work, perhaps doesn’t even compile at first
2. Green—make the test work quickly, committing whatever sins necessary in the process
3. Refactor—eliminate all the duplication created in just getting the test to work

Assuming for the moment that such a style is possible, it might be possible to dramatically reduce the defect density of code and make the subject of work crystal clear to all involved. If so, writing only code demanded by failing tests also has social implications:

Test-driven development is a way of managing fear during programming. I don’t mean fear in a bad way, pow widdle prwogwammew needs a pacifiew, but fear in the legitimate, this-is-a-hard-problem-and-I-can’t-see-the-end-from-the-beginning sense. If pain is nature’s way of saying “Stop!”, fear is nature’s way of saying “Be careful.” Being careful is good, but fear has a host of other effects:

Imagine programming as turning a crank to pull a bucket of water from a well. When the bucket is small, a free-spinning crank is fine. When the bucket is big and full of water, you’re going to get tired before the bucket is all the way up. You need a ratchet mechanism to enable you to rest between bouts of cranking. The heavier the bucket, the closer the teeth need to be on the ratchet.

The tests in test-driven development are the teeth of the ratchet. Once you get one test working, you know it is working, now and forever. You are one step closer to having everything working than you were when the test was broken. Now get the next one working, and the next, and the next. By analogy, the tougher the programming problem, the less ground should be covered by each test.

Readers of Extreme Programming Explained will notice a difference in tone between XP and TDD. TDD isn’t an absolute like Extreme Programming. XP says, “Here are things you must be able to do to be prepared to evolve further.” TDD is a little fuzzier. TDD is an awareness of the gap between decision and feedback during programming, and techniques to control that gap. “What if I do a paper design for a week, then test-drive the code? Is that TDD?” Sure, it’s TDD. You were aware of the gap between decision and feedback and you controlled the gap deliberately.

That said, most people who learn TDD find their programming practice changed for good. “Test Infected” is the phrase Erich Gamma coined to describe this shift. You might find yourself writing more tests earlier, and working in smaller steps than you ever dreamed would be sensible. On the other hand, some programmers learn TDD and go back to their earlier practices, reserving TDD for special occasions when ordinary programming isn’t making progress.

There are certainly programming tasks that can’t be driven solely by tests (or at least, not yet). Security software and concurrency, for example, are two topics where TDD is not sufficient to mechanically demonstrate that the goals of the software have been met. Security relies on essentially defect-free code, true, but also on human judgement about the methods used to secure the software. Subtle concurrency problems can’t be reliably duplicated by running the code.

Once you are finished reading this book, you should be ready to:

This book is organized into three sections.

Several reviewers have commented they got the most out of the examples when they started up a programming environment and entered the code and ran the tests as they read.

A note about the examples. Both examples, multi-currency calculation and a testing framework, appear simple. There are (and I have seen) complicated, ugly, messy ways of solving the same problems. I could have chosen one of those complicated, ugly, messy solutions to give the book an air of “reality.” However, my goal, and I hope your goal, is to write clean code that works. Before teeing off on the examples as being too simple, spend 15 seconds imagining a programming world in which all code was this clear and direct, where there were no complicated solutions, only apparently complicated problems begging for careful thought. TDD is a practice that can help you lead yourself to exactly that careful thought.