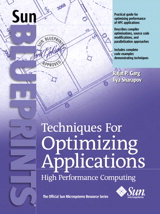 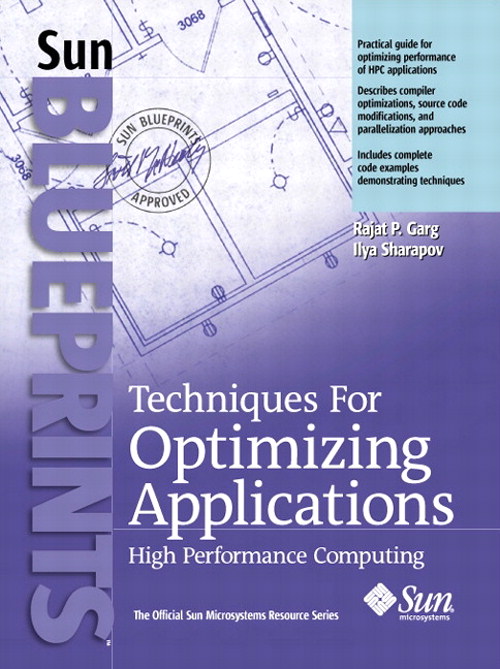 This book is a practical guide to performance optimization of computationally intensive programs on Sun UltraSPARC platforms. It is primarily intended for developers of technical or high performance computing (HPC) applications for the Solaris(tm) operating environment. This audience includes both independent software vendor (ISV) developers and noncommercial developers. It can also be used by end-users of HPC applications to help them better understand how applications utilize system resources.

The book presents information so that it follows logical stages of the process for application development and optimization. We pay special attention to issues related to parallel applications and to using appropriate performance measurement tools. Wherever applicable, sections are illustrated with code examples that show benefits of methods described.

Unless otherwise noted, topics in this book are not limited to a particular programming language, parallelization method, software version, or hardware product. However, emphasis is on techniques relevant to applications written in Fortran 77, Fortran 90, and C, because these languages are most commonly used in HPC and technical applications. Most topics can be applied to C++ programs; however, we do not address performance optimization issues specific to object-oriented programming.


Who Should Read This Book.


How This Book Is Organized.

7. Linker and Libraries in Performance Optimization.

We wrote this book with a general enough scope so that it would be useful to as many developers of technical applications on Sun platforms as possible. Also, we made the material practical by showing developers how to use each optimization method.

For information on related topics such as system configuration and tuning, or improving the I/O and network performance, we refer readers to other resources.

This book differs from other books and technical documents written aboutperformance optimization of high performance computing (HPC) applications. In many cases, other resources either give a detailed description of a product or provide general recommendations that are sometimes difficult to apply to practical tasks. In addition, some older resources are not as useful because of changes in technology.

Though many of the techniques we offer apply to other platforms, we limited the scope of this guide to Sun compilers and UltraSPARC-based Solaris systems. We address new features in Sun compilers and in the Solaris Operating Environment, and we show readers how to use these products to get maximum performance on Sun hardware.

This guide is primarily for developers of technical or HPC applications for Solaris. This audience includes both independent software vendor (ISV) developers and non-commercial developers.

Developers creating or optimizing applications in the following fields may benefit from reading this book:

This book may also be helpful to technical application end-users in understanding the principles of HPC and how an application utilizes system resources.

We assume the reader has:

Unless otherwise noted, topics in this book are not limited to a programming language, parallelization method, or software version. However, emphasis is on techniques relevant to applications written in Fortran 77, Fortran 90, and C, because these languages are most commonly used in HPC and technical applications.

Most topics can be applied to C++ programs; however, we do not address performance optimization issues for object oriented programming. We refer readers to other resources.

This book presents information so that it follows logical stages of the process for application development and optimization. We pay special attention to issues related to parallel applications and to using appropriate performance monitoring tools.

Wherever applicable, sections are illustrated with code examples that show benefits of methods described.

Part I - Getting Started

Chapter 1 "Introduction," introduces optimization for HPC applications. We describe the basics of the optimization process and illustrate it with flow charts for serial and parallel optimization.

Chapter 5 "Basic Compiler Optimizations," introduces basic compiler optimizations and how to use compiler flags correctly. Options covered in this chapter are safe and generally can be applied without knowledge of any specifics of the application. The impact of using these flags is illustrated with examples, and analysis of the generated code with and without the options is presented.

Chapter 6 "Advanced Compiler Optimizations," extends Chapter 5 and gives an overview of techniques that enable aggressive compiler optimizations. These often result in additional performance gains but may also lead to incorrect answers or spurious side-effects. Also, we cover performance related compiler pragmas and directives, which can be inserted in a program. Information about a program can be passed to the compiler, allowing additional optimizations.

Chapter 7 "Linker and Libraries in Performance Optimization," highlights optimized libraries and features of the Solaris linker that can be used for application optimization. We describe the platform-specific optimized math libraries whose use can result in significant performance gains. We show linker techniques that allow linking of these platform-specific libraries in a portable fashion.

Chapter 8 "Source Code Optimization," provides an overview of tuning techniques at the source code level. The techniques were selected from the point of view of better utilizing the underlying architectural features of UltraSPARC systems. We pay special attention to memory hierarchy utilization such as cache blocking and reducing the translation lookaside buffer (TLB) misses. We present ways of simplifying the code to allow better compiler optimizations, such as alias disambiguation in C programs, to take place.

Chapter 9 "Loop Optimization," focuses on optimizing loops, one of the most commonly used constructs in scientific and HPC programs. We discuss ways in which developers can help the compiler control loop fusion and fission, as well as perform loop peeling. We show examples of register-tiling and consider loops with branches.

Chapter 12 "Optimization of Explicitly Threaded Programs," provides an overview of explicit multithreading of programs using P-threads and Solaris threads. An overview of thread scheduling models in Solaris and their relevance to HPC programs is given and techniques for decreasing synchronization overheads are described.

Chapter 13 "Optimization of Programs Using Compiler Parallelization," covers support and optimization techniques for automatic and directive-based parallelization in Sun compilers. Special emphasis is given to tuning OpenMP programs using the Fortran 95 compiler. OpenMP programming styles and data-scoping issues are illustrated with examples. Comparisons between OpenMP and P-threads approaches are presented.

To keep the scope of this book manageable, we intentionally omitted many subjects related to performance optimization. Our criteria was to omit subjects that were not applicable to a wide range of applications. Many of these subjects are presented in other documentation for Sun products. The following is a list of publications you may find useful for more narrowly focused subjects:

The following publications are related to UltraSPARC microprocessors:

These publications are available at:

Other sites of great use for developers are http://www.sun.com/developers/ and http://soldc.sun.com/, which contains current information for the Sun developer community.

For specialized books and additional theoretical information on application optimization, we refer readers to other sources. There are many excellent books on topics such as optimizing compilers, software tuning techniques, and efficient parallelization. The following are some helpful resources:

More resources are listed in the References section at the end of this book.

Readers interested in "hands on" training should check with the Sun Educational Services to determine if a class is scheduled and enrollment is open.

Many sections in this book are illustrated with code examples that show benefits of optimization techniques and coding practices. The code examples can be downloaded from the Sun BluePrints site:

A makefile is provided for each chapter so that the examples can be run with a single make command.

Unless otherwise noted, all examples and results presented in this book use Forte Developer 6 compilers and the HPC 3.1 ClusterTools release. The results for serial runs were obtained on Sun Ultra 60, Sun Ultra 80, and Sun Blade 1000 systems. The results for parallel runs were performed on Sun Enterprise 4500, Sun Enterprise 10000 servers, and a Sun technical compute farm. The system parameters are listed in TABLE P-1 and TABLE P-2, respectively. More information about Sun platforms is in Chapter 2.