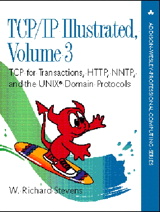 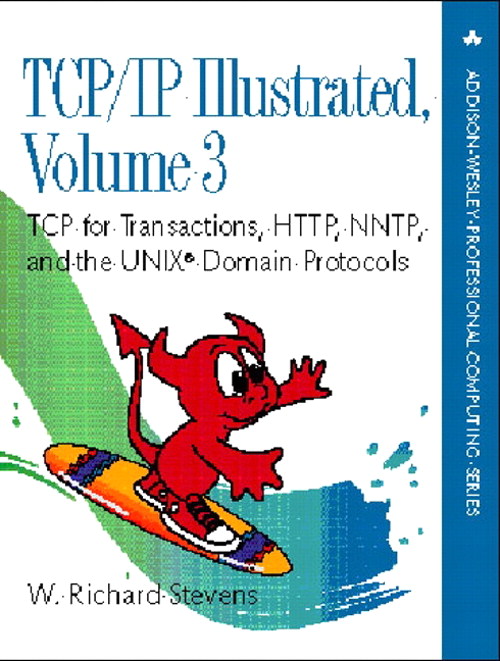 Praised by reviewers and practicing TCP/IP programmers alike, the TCP/IP Illustrated series examines the many facets of the TCP/IP protocol suite using a unique and highly-effective visual approach that describes the inner workings of TCP/IP with detail, insight, and clarity.

Volume 3 provides detailed coverage of four essential topics with which today's TCP/IP programmers and network administrators must be thoroughly familiar:

As in the previous two volumes, the book is filled with examples and implementation details within the 4.4BSD-Lite networking code.

The TCP/IP Illustrated series provides a complete picture of the protocol suite that drives the Internet, and gives programmers, system administrators, and serious users the information, understanding, and skills they need to remain at the forefront of networking technology.

(Most chapters open with "Introduction" and conclude with "Summary".)


I. TCP FOR TRANSACTIONS.

Purpose of the TIME_WAIT State.

Avoiding the Three-Way Handshake with TAO.

Introduction to HTTP and HTML.

14. Packets Found on an HTTP Server.

Introduction and Organization of the Book

This book is divided into three parts,each covering a different topic:

TCP for transactions, commonly called T/TCP. This is an extension to TCP designed to make client-server transactions faster, more efficient, and reliable. This is done by omitting TCP's three-way handshake at the beginning of a connection and shortening the TIME_WAIT state at the end of a connection. We'll see that T/TCP can match UDP's performance for a client-server transaction and that T/TCP provides reliability and adaptability, both major improvements over UDP.

A transaction is defined to be a client request to a server, followed by the server's reply. (The term transaction does not mean a database transaction, with locking, two-phase commit, and backout.)

Part 2, the HTTP and NNTP applications, are a continuation of the TCP/IP applications presented in Chapters 25-30 of Volume 1. In the two years since Volume 1 was published, the popularity of HTTP has grown enormously, as the Internet has exploded, and the use of NNTP has been growing about 75% per year for more than 10 years. HTTP is also a wonderful candidate for T/TCP, given its typical use of TCP: short connections with small amounts of data transferred, where the total time is often dominated by the connection setup and teardown. The heavy use of HTTP (and therefore TCP) on a busy Web server by thousands of different and varied clients also provides a unique opportunity to examine the actual packets at the server (Chapter 14) and look at many features of TCP/IP that were presented in Volumes 1 and 2.

The Unix domain protocols in Part 3 were originally considered for Volume 2 but omitted when its size reached 1200 pages. While it may seem odd to cover protocols other than TCP/IP in a series titled TCP/IP Illustrated, the Unix domain protocols were implemented almost 15 years ago in 4.2BSD alongside the first implementation of BSD TCP/IP. They are used heavily today in any Berkeley-derived kernel, but their use is typically "under the covers," and most users are unaware of their presence. Besides being the foundation for Unix pipes on a Berkeley-derived kernel, another heavy user is the X Window System, when the client and server are on the same host (i.e., on typical workstations). Unix domain sockets are also used to pass descriptors between processes, a powerful technique for interprocess communication. Since the sockets API (application program interface) used with the Unix domain protocols is nearly identical to the sockets API used with TCP/IP, the Unix domain protocols provide an easy way to enhance the performance of local applications with minimal code changes.

Each of the three parts can be read by itself.

As with the previous two volumes in the series, this volume is intended for anyone wishing to understand how the TCP/IP protocols operate: programmers writing network applications, system administrators responsible for maintaining computer systems and networks utilizing TCP/IP, and users who deal with TCP/IP applications on a daily basis.

Parts 1 and 2 assume a basic understanding of how the TCP/IP protocols work. Readers unfamiliar with TCP/IP should consult the first volume in this series, Stevens 1994, for a thorough description of the TCP/IP protocol suite. The first half of Part 1 (Chapters 1-4, the concepts behind T/TCP along with examples) can be read independent of Volume 2, but the remainder of Part 1 (Chapters 5-12, the implementation of T/TCP) assumes familiarity with the 4.4BSD-Lite networking code, as provided with Volume 2.Many forward and backward references are provided throughout the text, to both topics within this text, and to relevant sections of Volumes 1 and 2 for readers interested in more details. A thorough index is provided, and a list of all the acronyms used throughout the text, along with the compound term for the acronym, appears on the inside front covers. The inside back covers contain an alphabetical cross-reference of all the structures, functions, and macros described in the book and the starting page number of the description. This cross-reference also refers to definitions in Volume 2, when that object is referenced from the code in this volume.

All the source code in this book that is taken from the 4.4BSD-Lite release contains the following copyright notice:

First and foremost I thank my family, Sally, Bill, Ellen, and David, who have endured another book along with all my traveling during the past year. This time, however, it really is a "small" book.

Special thanks are also due Vern Paxson and Andras Olah for their incredibly detailed reviews of the entire manuscript, finding many errors and providing valuable technical suggestions. My thanks also to Vern Paxson for making available his software for analyzing Tcpdump traces, and to Andras Olah for his help with T/TCP over the past year. My thanks also to Bob Braden, the designer of T/TCP, who provided the reference source code implementation on which Part 1 of this book is based.

Others helped in significant ways. Gary Wright and Jim Hogue provided the system on which the data for Chapter 14 was collected. Doug Schmidt provided a copy of the public domain TTCP program that uses Unix domain sockets, for the timing measurements in Chapter 16. Craig Partridge provided a copy of the RDP source code to examine. Mike Karels answered lots of questions.

My thanks once again to the National Optical Astronomy Observatories (NOAO), Sidney Wolff, Richard Wolff, and Steve Grandi, for providing access to their networks and hosts.

Finally, my thanks to all the staff at Addison-Wesley, who have helped over the past years, especially my editor John Wait.

As usual, camera-ready copy of the book was produced by the author, a Troff die-hard, using the Groff package written by James Clark. I welcome electronic mail from any readers with comments, suggestions, or bug fixes.