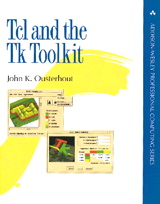 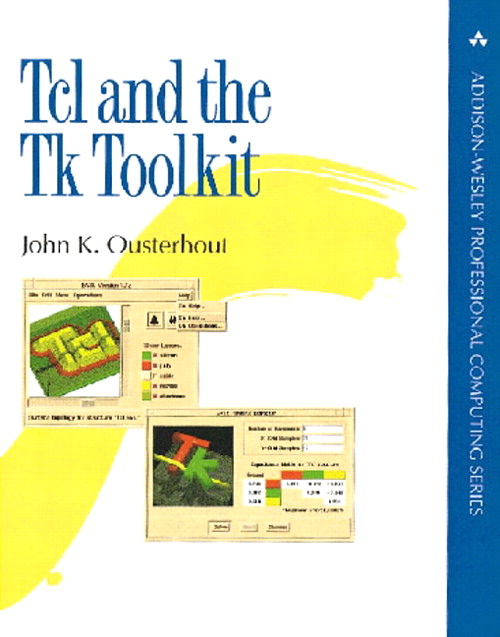 Tcl and the Tk Toolkit

The Tcl scripting language and the Tk toolkit - a programming environment for creating graphical user interfaces under X Windows - together represent one of the most exciting innovations in X Window System programming. Because Tcl and Tk are so easy to learn, extremely powerful, and contain so many sophisticated features, they have dramatically reduced development time for thousands of X programmers.

Written by the creator of Tcl and Tk, this book is the single authoritative resource for anyone who wants to work with this extraordinary environment. The book offers an introduction and overview of Tcl and Tk and then presents detailed instructions for script writing in Tcl and working with the Tk toolkit.

You will discover how Tk's windowing shell, wish, enables you to develop window-based applications with amazingly few lines of code. You will also find information on Tk's novel and powerful facility for linking applications. Many other features are also described, such as Tk's hypertext and hypergraphics widgets and Tcl's facilities for procedures, list management, and subprocess execution.

For interested readers, the book also describes the C interfaces for Tcl and Tk, showing how to extend their built-in features by writing new C commands.

Upon reading this book, you will learn how to produce far more powerful X Windows System applications in a fraction of the time that used to be required.

"The main guide to Tcl is Tcl and the Tk Toolkit by John Ousterhout (Reading, MA: Addison-Wesley, 1994), the creator of Tcl."
- Unix Review

"The definitive source of information on the system is John Ousterhout's book, Tcl and the Tk Toolkit, published by Addison-Wesley."
- Linux Journal

"Overall, Ousterhout has provided an excellent overview (Tcl and the Tk Toolkit)of a very useful piece of software. If you're thinking of building or customizing a graphical user interface, you won't find many guides better than this."
- IEEE Computer

"This is an extremely well-written book, containing many figures, tables, examples, and scripts to illustrate the Tcl and Tk concepts. His presentation technique and expertise result in a superb text. I enjoyed Tcl and the Tk Toolkit and recommend it highly to anyone with any shell writing experience. Everyone who uses the X Window System will find this book helpful."
- Sys Admin

Tk 4.0 Overview and Porting Guide (a PostScript file of additional material not included in the printed book)

Happy 15th Birthday to Tcl and the Tk Toolkit

Organization of the Book.

On the Tcl Language.

Additional Features of Tcl and Tk.

I. THE TCL LANGUAGE.


Simple Variables and the Set Command.

The Incr and Append Commands.

Preview of Other Variable Facilities.

Converting Between Strings and Lists: Split and Join.

Looping Commands: While, For, and Foreach.

Defaults and Variable Numbers of Arguments.

I/O To and From a Command Pipeline.

Terminating the Tcl Process with Exit.


What Happens after an Error?


Querying the Elements of an Array.


A Brief Introduction to X.


An Overview of Geometry Management.

The Pack Command and -Side Options.

Other Options to the Pack Command.

Other Geometry Managers in Tk.

An Overview of the Bind Command.

When are Events Processed?

Other Uses of Bindings.

Manipulating Items with Identifiers and Tags.

Locating and Clearing the Selection.

Supplying the Selection with Tcl Scripts.

A Warning about Window Managers.

The RESOURCE_MANAGER Property and .Xdefaults File.

Priorities in the Option Database.


A Procedure that Generates Dialog Boxes.

Procedures for Managing the Result.

Augmenting the Stack Trace in errorInfo.


What's in a Widget?

The Relationship Between Tk and Xlib.


Requesting a Size for a Widget.

Appendix A. Installing Tcl and Tk.

Compiling and Installing the Distributions.

In the fall of 1987 it occurred to me that the solution was to build a reusable command language. If a general-purpose scripting language could be built as a C library package, then perhaps it could be reused for many different purposes in many different applications. Of course, the language would need to be extensible so that each application could add its own specific features to the core provided by the library. In the spring of 1988 I decided to implement such a language, and the result was Tcl.

Tk was also born of frustration. The basic idea for Tk arose in response to Apple's announcement of HyperCard in the fall of 1987. HyperCard generated tremendous excitement because of the power of the system and the way in which it allowed many different interactive elements to be scripted and work together. However, I was discouraged. The HyperCard system had obviously taken a large development effort, and it seemed unlikely to me that a small group such as a university research project could ever mount such a massive effort. This suggested that we would not be able to participate in the development of new forms of interactive software in the future.

I concluded that the only hope for us was a component approach. Rather than building a new application as a self-contained monolith with hundreds of thousands of lines of code, we needed to find a way to divide applications into many smaller reusable components. Ideally each component would be small enough to be implemented by a small group, and interesting applications could be created by assembling components. In this environment it should be possible to create an exciting new application by developing one new component and then combining it with existing components.

The component-based approach requires a powerful and flexible "glue"for assembling the components, and it occurred to me that perhaps a shared scripting language could provide that glue. Out of this thinking grew Tk, an X11 toolkit based on Tcl. Tk allows components to be either individual user-interface controls or entire applications; in either case components can be developed independently and Tcl can be used to assemble the components and communicate between them.

I started writing Tcl and Tk as a hobby in my spare time. As other people began to use the systems I found myself spending more and more time on them, to the point where today they occupy almost all of my waking hours and many of my sleeping ones.

Tcl and Tk have succeeded beyond my wildest dreams. The Tcl/Tk developer community now numbers in the tens of thousands and there are thousands of Tcl applications in existence or under development. The application areas for Tcl and Tk cover virtually the entire spectrum of graphical and engineering applications, including computer-aided design, software development, testing, instrument control, scientific visualization, and multimedia. Tcl is used by itself in many applications, and Tcl and Tk are used together in many others. Tcl and Tk are being used by hundreds of companies, large and small, as well as universities and research laboratories.

One benefit that came as a surprise to me is that it is possible to create interesting graphical user interfaces (GUIs) entirely as Tcl scripts. I had always assumed that every Tcl application would contain some new C code that implements new Tcl commands, plus some Tcl scripts that combine the new commands with the built-in facilities provided by Tcl. However, once a simple Tcl/Tk application called wish became available, many people began creating user interfaces by writing Tcl scripts for it, without writing any C code at all! It turned out that the Tcl and Tk commands provide a high-level interface to GUI programming that hides many of the details faced by a C programmer. As a result, it is much easier to learn how to use wish than a C-based toolkit, and user interfaces can be written with much less code. Most Tcl/Tk users never write any C code at all and most of the Tcl/Tk applications consist solely of Tcl scripts.

This book is intended as an introduction to Tcl and Tk for programmers who plan to write or modify Tcl/Tk applications. I assume that readers have programmed in C and have at least passing familiarity with a shell such as sh or csh or ksh. I also assume that readers have used the X Window System and are familiar with basic ideas such as using the mouse, resizing windows, etc. No prior experience with Tcl or Tk is needed in order to read this book, and you need not have written X applications using other toolkits such as Motif.

The book is organized so that you can learn Tcl without learning Tk if you wish. Also, the discussion of how to write Tcl scripts is separate from the discussion of how to use the C library interfaces provided by Tcl and Tk. The first two parts of the book describe Tcl and Tk at the level of writing scripts, and the last two parts describe the C interfaces for Tcl and Tk; if you are like the majority of Tcl/Tk users who only write scripts, you can stop after reading the first two parts.

In spite of my best efforts, I'm sure that there are errors in this edition of the book. I'm interested in hearing about any problems that you encounter, whether they are typos, formatting errors, sections or ideas that are hard to understand, or bugs in the examples. I'll attempt to correct the problems in future printings of the book. The best way to report problems is with electronic mail sent to tclbookbugs@cs.berkeley.edu.

Many people have helped in the creation of this book. First and foremost I would like to thank Brian Kernighan, who reviewed several drafts of the manuscript with almost terrifying thoroughness and uncovered numerous problems both large and small. I am also grateful for the detailed comments provided by the other Addison-Wesley technical reviewers: Richard Blevins, Gerard Holzmann, Curt Horkey, Ron Hutchins, Stephen Johnson, Oliver Jones, David Korn, Bill Leggett, Don Libes, Kent Margraf, Stuart McRobert, David Richardson, Alexei Rodrigues, Gerald Rosenberg, John Slater, and Win Treese. Thanks also to Bob Sproull, who read the next-to-last draft from cover to cover and provided countless bug fixes and suggestions.

Many many people have made significant contributions to the development of Tcl and Tk. Without all of their efforts there would have been nothing of interest to write about in this book. Although I cannot hope to acknowledge all the people who helped to make Tcl and Tk what they are today, I would like to thank the following people specially: Don Libes, for writing the first widely used Tcl application; Mark Diekhans and Karl Lehenbauer, for TclX; Alastair Fyfe, for supporting the early development of Tcl; Mary Ann May-Pumphrey, for developing the original Tcl test suite; George Howlett, Michael McLennan, and Sani Nassif, for the BLT extensions; Kevin Kenny, for showing that Tcl can be used to communicate with almost any imaginable program; Joel Bartlett, for many challenging conversations and for inspiring Tk's canvas widget with his ezd program; Larry Rowe, for developing Tcl-DP and for providing general advice and support; Sven Delmas, for developing the XF application builder based on Tk; and Andrew Payne, for the widget tour and for meritorious Tcl evangelism.

Several companies have provided financial support for the development of Tcl and Tk, including Digital Equipment Corporation, Hewlett-Packard Corporation, Sun Microsystems, and Computerized Processes Unlimited. I am particularly grateful to Digital's Western Research Laboratory and its director, Richard Swan, for providing me with a one-day-per-week hideaway where I could go to gather my thoughts and work on Tcl and Tk.

Terry Lessard-Smith and Bob Miller have provided fabulous administrative support for this and all my other projects. I don't know how I would get anything done without them.

Finally, I owe a special debt to my colleague and friend Dave Patterson, whose humor and sage advice have inspired and shaped much of my professional career, and to my wife Rita and daughters Kay and Amy, who have tolerated my workaholic tendencies with more cheer and affection than I deserve.