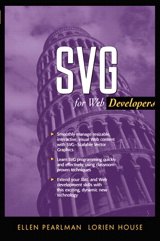 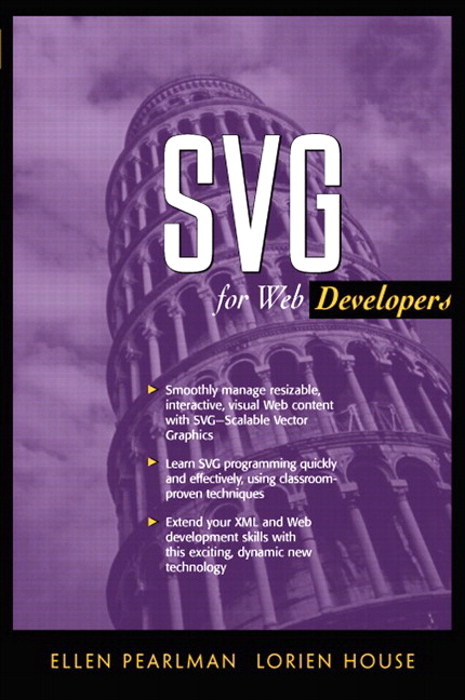 Scalable Vector Graphics (SVG) is a powerful, XML-based language for describing two-dimensional graphics. Web developers will find many compelling features in SVG, including low-bandwidth images that scale without loss of resolution; customizable, dynamic, data-driven content; animation; interactivity via languages such as JavaScript, Java, and Visual Basic; and more. As a text-based format, SVG files can be understood by humans, edited with text editors, and even indexed online by search engines.

The major Web browsers promise native SVG support in the near future, so now's the time to catch up with this emerging technology. Developing SVG-based Web Applications, by Web development authority Ellen Pearlman and graphic artist/Web designer Lorien House, teaches you to produce top-notch content without losing you in extraneous details. Coverage includes the effective use of color, gradients, and other effects, and how to tie it all together with CSS. You'll also learn how to add dynamic elements to your site, including animation and interactivity, as well as how to use SVG effectively with drawing, database, and other software. Complete with plenty of practical, classroom-tested examples to work through, you'll find Developing SVG-based Web Applications both approachable and informative.

Download the code, figures, and supplemental resource files featured in the book.

Basic Shapes and Text in SVG

11. SVG and Other Packages.


What Is Unicode? XML and Different Devices. A Word about Devices and Style Sheets. XSL and XSLT. XSL Transformations. SVG and XSLT. Conclusion.

SVG, although a revelation for graphic artists and designers who use the Web, is actually the result of the ongoing development of XML (Extensible Markup Language). To designers and users alike, it has become increasingly clear that bitmapped graphics are too large and occupy too much bandwidth—one of a host of disadvantages. Another is the inability to break open the actual graphics code and get in there and edit it. With SVG you now can.

HTML created a new era for the Internet, starting with the very first browser, Mosaic. XML, along with SVG and a host of other XML-derived standards and codes, will enable the idea of multiple devices and their displays to become a reality. The SVG-enabled Adobe Viewer and other viewers will be integrated on the back end of the releases of most major browsers in the future and will become the defacto standard in developing visual displays because of their streamlining abilities.

Learning SVG is not as easy as HTML but its potential is just as great. Learning the basic rules and then using your own brand of creativity with them is what this book is about. However, it is best to begin to look at any SVG design project in three ways: as a graphic designer, an animator, and a little bit as a programmer. The good news is this is not new for most Web-enabled designers who are already capable of programming in Macromedia's Flash ActionScript.

This book, therefore, is written for those with some basic programming ability, although it is not absolutely necessary to have those skills to use this book. But once you become familiar with the basics, the learning curve will accelerate and you will be on your way to creating your own interesting and dynamic Web sites.

Modern JavaScript for the Impatient