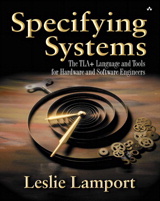 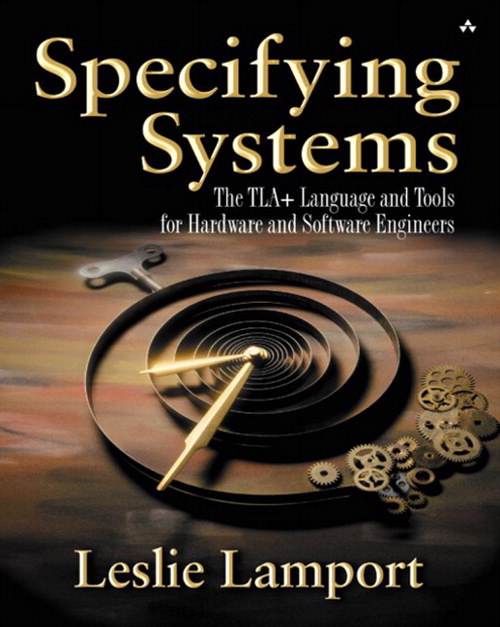 Specifying Systems: The TLA+ Language and Tools for Hardware and Software Engineers

This book is the distillation of over 25 years of work by one of the world's most renowned computer scientists. A specification is a written description of what a system is supposed to do, plus a way of checking to make sure that it works. Specifying a system helps us understand it. It's a good idea to understand a system before building it, so it's a good idea to write a specification of a system before implementing it. The most effective tool to describe a specification is the Temporal Logic of Actions, or TLA, because it provides a mathematical, i.e. precise, foundation for describing systems. TLA+ is the language the author developed to write the mathematical specifications. TLA+ is available freely on the web. It can be used for both software and hardware. In fact, Intel is using TLA+ with great success in the design of a new chip. The book is divided into four parts. The first part contains all that most programmers and engineers need to know about writing specifications. The second part contains more advanced material for more sophisticated readers. The third and fourth parts comprise a reference manual for TLA+ - both the language itself as well as its tools.

Using TLA+ to Write Specifications for an Asynchronous Interface

A Closer Look at the Specification.

The Specification in TLA+.

7. Writing a Specification: Some Advice.

The Grain of Atomicity.

When and How to Specify.

Another Way to Write It.

The Unimportance of Liveness.

A Taxonomy of Composition.

12. The Syntactic Analyzer.
13. The TLATEX Typesetter.

How It Typesets the Specification.

How It Typesets Comments.

What TLC Can Cope With.

How to Use TLC.

What TLC Doesn't Do.

The Grammar of the Configuration File.

The Lexemes of TLA+.

The Operators of Set Theory.

The Meaning of a State Function.

The Order and Arity of an Operator.

The Meaning of a ¿¿ Expression.

The Meaning of a Module.

Correctness of a Module.

The Semantics of Instantiation.

This book will teach you how to write specifications of computer systems, using the language TLA+. It's rather long, but most people will read only Part I, which comprises the first 83 pages. That part contains all that most engineers need to know about writing specifications; it assumes only the basic background in computing and knowledge of mathematics expected of an undergraduate studying engineering or computer science. Part II contains more advanced material for more sophisticated readers. The remainder of the book is a reference manual--Part III for the TLA+ tools and Part IV for the language itself.

The TLA World Wide Web page contains material to accompany the book, including the TLA+ tools, exercises, references to the literature, and a list of corrections. There is a link to the TLA Web page on http://lamport.org.

What Is a Specification?

Writing is nature's way of letting you know how sloppy your thinking is.
-Guindon

Our basic tool for writing specifications is mathematics. Mathematics is nature's way of letting you know how sloppy your writing is. It's hard to be precise in an imprecise language like English or Chinese. In engineering, imprecision can lead to errors. To avoid errors, science and engineering have adopted mathematics as their language.

The mathematics we use is more formal than the math you've grown up with. Formal mathematics is nature's way of letting you know how sloppy your mathematics is. The mathematics written by most mathematicians and scientists is not really precise. It's precise in the small, but imprecise in the large. Each equation is a precise assertion, but you have to read the accompanying words to understand how the equations relate to one another and exactly what the theorems mean. Logicians have developed ways of eliminating those words and making the mathematics completely formal, and hence completely precise.

Most mathematicians and scientists think that formal mathematics, without words, is long and tiresome. They're wrong. Ordinary mathematics can be expressed compactly in a precise, completely formal language. It takes only about two dozen lines to define the solution to an arbitrary differential equation in the Differential Equations module of Chapter 11. But few specifications need such sophisticated mathematics. Most require only simple application of a few standard mathematical concepts.

In the late 1980s, I invented TLA, the Temporal Logic of Actions--a simple variant of Pnueli's original logic. TLA makes it practical to describe a system by a single formula. Most of a TLA specification consists of ordinary, nontemporal mathematics. Temporal logic plays a significant role only in describing those properties that it's good at describing. TLA also provides a nice way to formalize the style of reasoning about systems that has proved to be most effective in practice--a style known as assertional reasoning. However, this book is about specification; it says almost nothing about proofs.

Temporal logic assumes an underlying logic for expressing ordinary mathematics. There are many ways to formalize ordinary math. Most computer scientists prefer one that resembles their favorite programming language. I chose instead the one that most mathematicians prefer--the one logicians call first-order logic and set theory.

TLA provides a mathematical foundation for describing systems. To write specifications, we need a complete language built atop that foundation. I initially thought that this language should be some sort of abstract programming language whose semantics would be based on TLA. I didn't know what kind of programming language constructs would be best, so I decided to start writing specifications directly in TLA. I intended to introduce programming constructs as I needed them. To my surprise, I discovered that I didn't need them. What I needed was a robust language for writing mathematics.

Although mathematicians have developed the science of writing formulas, they haven't turned that science into an engineering discipline. They have developed notations for mathematics in the small, but not for mathematics in the large. The specification of a real system can be dozens or even hundreds of pages long. Mathematicians know how to write 20-line formulas, not 20-page formulas. So, I had to introduce notations for writing long formulas. What I took from programming languages were ideas for modularizing large specifications.

The language I came up with is called TLA+. I refined TLA+ in the course of writing specifications of disparate systems. But it has changed little in the last few years. I have found TLA+ to be quite good for specifying a wide class of systems--from program interfaces (APIs) to distributed systems. It can be used to write a precise, formal description of almost any sort of discrete system. It's especially well suited to describing asynchronous systems--that is, systems with components that do not operate in strict lock-step.

Part I, consisting of Chapters 1 through 7, is the core of the book and is meant to be read from beginning to end. It explains how to specify the class of properties known as safety properties. These properties, which can be specified with almost no temporal logic, are all that most engineers need to know about. After reading Part I, you can read as much of Part II as you like. Each of its chapters is independent of the others. Temporal logic comes to the fore in Chapter 8, where it is used to specify the additional class of properties known as liveness properties. Chapter 9 describes how to specify real-time properties, and Chapter 10 describes how to write specifications as compositions. Chapter 11 contains more advanced examples.

The three chapters in Part III serve as the reference manual for three TLA+ tools: the Syntactic Analyzer, the TLATEX typesetting program, and the TLC model checker. If you want to use TLA+, then you probably want to use these tools. They are available from the TLA Web page. TLC is the most sophisticated of them. The examples on the Web can get you started using it, but you'll have to read Chapter 14 to learn to use TLC effectively.

Part IV is a reference manual for the TLA+ language. Part I provides a good enough working knowledge of the language for most purposes. You need look at Part IV only if you have questions about the fine points of the syntax and semantics. Chapter 15 gives the syntax of TLA+. Chapter 16 describes the precise meanings and the general forms of all the built-in operators of TLA+; Chapter 17 describes the precise meaning of all the higher-level TLA+ constructs such as definitions. Together, these two chapters specify the semantics of the language. Chapter 18 describes the standard modules--except for module RealTime, described in Chapter 9, and module TLC, described in Chapter 14. You might want to look at this chapter if you're curious about how standard elementary mathematics can be formalized in TLA+.

Part IV does have something you may want to refer to often: a mini-manual that compactly presents lots of useful information. Pages 268-273 list all TLA+ operators, all user-definable symbols, the precedence of all operators, all operators defined in the standard modules, and the ASCII representation of symbols.