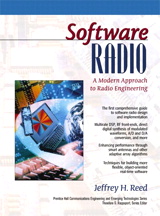 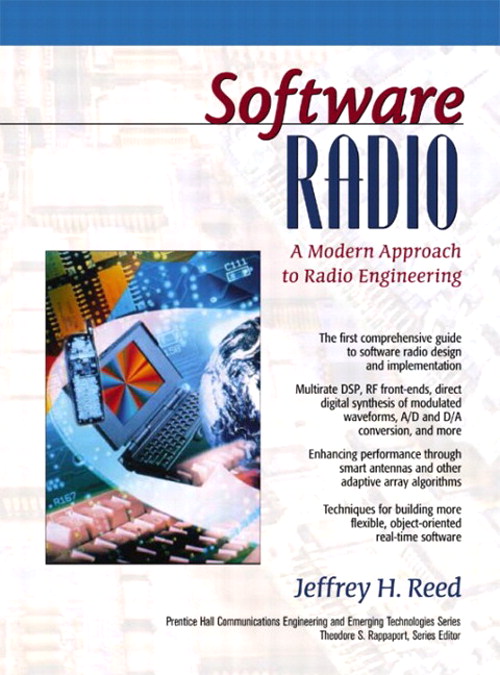 The definitive engineer's guide to designing and building software-based radios.

Radios, once implemented purely in hardware, are increasingly built using programmable digital signal processing (DSP) devices that enhance device flexibility, simplify manufacture, and reduce costs. However, many engineers are unfamiliar with the latest techniques for building software radios for wireless systems and devices. This book fills the gap, introduces the key concepts of software radio design, and covers every issue and technique engineers must understand to successfully utilize DSP in their radio systems and subsystems. Coverage includes:

The book concludes with case studies drawn from the advanced work of the SDR Forum, the leading consortium of companies, universities, and research organizations promoting software radio development.


The Purpose of the RF Front-End. Dynamic Range: The Principal Challenge of Receiver Design. RF Receiver Front-End Topologies. Enhanced Flexibility of the RF Chain with Software Radios. Importance of the Components to Overall Performance. Transmitter Architectures and Their Issues. Noise and Distortion in the RF Chain. ADC and DAC Distortion.

5. Analog to Digital and Digital to Analog Conversion.


About the Chapter Co-Authors.

This change in the design paradigm for new radios has occurred so rapidlythat it has left a significant void in the educational material availableto train new radio engineers. Traditional radio engineering textbooksemphasize analog component-level design with little mention of theincreasingly important role of digital signal processing in performingthe central functions of the radio transceiver. Individual referencescovering the key analog and digital subsystems tend to be insufficientin that they fail to provide a full understanding of the interaction betweenthese subsystems.

I became acutely aware of this void when conducting research into thedevelopment of novel high-performance radios for the Defense AdvancedResearch Projects Agency (DARPA). While constructing radioprototypes, I found there was no comprehensive resource to which Icould point my students for information on how to build DSP-basedradios. This experience, combined with similar frustrations voiced bymy colleagues from both academia and industry, has led me to write thisbook on modern radio design principles. My goal in developing thisbook was to provide this necessary understanding of the interaction ofkey subsystems.

Software radios are emerging in commercial and military infrastructure.This growth is motivated by the numerous advantages of software radios.

Much of the flexibility of asoftware radio comes from being able to create arbitrary modulation typesdirectly within the digital domain. In many cases, the direct digitalsynthesis methods used to generate these signals are more than justdigitized realizations of analog techniques and afford the designer greaterfreedom in design signal waveforms. Chapter 4 surveys the topic ofdirect digital synthesis of modulated waveforms.

Analog to digital converters and digital to analogconverters, along with the power amplifier, are themost critical components in software radio design. The demands on thesecomponents can be very high. A rigorous understanding of the conversionprocess and the trade-offs between the resolution, sample rate, and dynamicrange of the resulting system are the focus of Chapter 5.

An important benefit of software radios is the ability to incorporatesophisticated algorithms, such as smart antennas, into the radio toenhance performance. Chapter 6 reviews the wide variety ofadaptive array algorithms and hardware implementation issues.

Thebasics of digital signal processing microprocessors, Field ProgrammableGate Arrays (FPGAs), andApplication Specific Integrated Circuits (ASICs) and how one would chooseone these alternatives for constructing a software radio are discussedin Chapter 7.

A systematic design approach tocreating software is essential to enable expandability of the radiocapability. Furthermore, as new applications are created to run over thesoftware radio, the radio itself must become transparent to the newapplications. Chapter 8 examines object-oriented programmingapproaches, including JAVA and Common Object Request Broker Architecture (CORBA) forcreating software radios.

Chapter 9 examines some examplesof software radios that have been built. The Software-DefinedRadio (SDR) Forum, a consortium of companies, universities, and researchorganizations, has defined guidelines and standards for the creationof software radios. A description of this standardized software radiois provided in this chapter.

If this book is being used for a course, there is much flexibility inselecting chapters to create a customized course. For the onesemester class, I recommend covering Chapters 1-3, Sections 4.1-4.8, 5.1-5.4, 6.1-6.6, 7.1-7.3, and Chapters 8-9.For a class on the quarter system, I recommend Chapters 1, 2, and 5, Sections 6.1-6.5, Chapter 8, and Sections 9.1-9.3. Although there is muchlatitude in mixing and matching sections to customize the course tothe instructor's objectives, I do recommend that Chapters 8and 9 be covered together as a single unit. Students who havean electrical engineering background in basic circuit analysis(typically junior-level), computer architecture (junior- orsenior-level), and communications (senior-level) have a sufficientbackground for all chapters in this book.

URLs included in the text and in citations were correct when the bookwas written. However, due to the dynamic nature of the World WideWeb, URLs may no longer be active. Periodic updates, information forinstructors, and errata to the book can be found athttp://www.softradios.com/book.html.Additional information about software radios can be found athttp://www.mprg.org/publications/pubs.shtml#Book