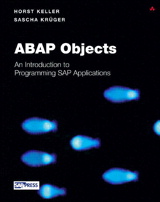 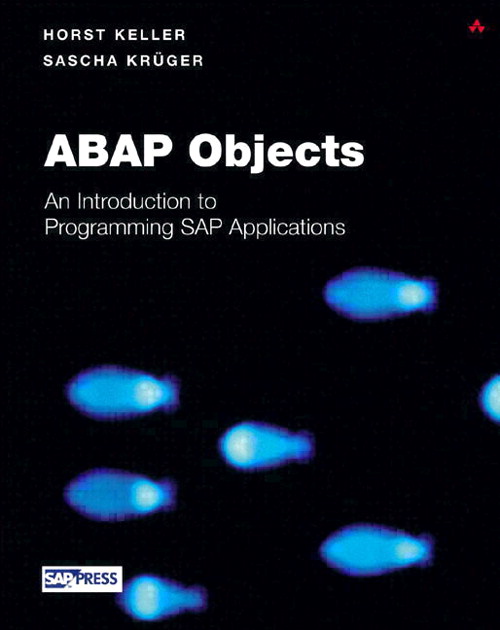 
What is ABAP Objects?

How to Use This Book in Practice.

First steps with the ABAP Workbench.

Getting started with the ABAP Workbench.

Working with the Object Navigator.

View of the first application program.

Dialog modules in the ABAP program.

Working with the ABAP Debugger.

The data interface between the program and screen.

Final comments on the practical introduction.


The environment of an ABAP program.

The architecture of an SAP System.

ABAP programs in the client-server architecture.

ABAP programs in the runtime environment.

Introduction to the ABAP type concept.

Data types and data objects local to the program.

Data types in the ABAP Dictionary.

Visibility and Lifetime of Data.

How do we Define Object-orientation?

More on Defining and Calling Methods.

Visibility sections and namespaces in inheritance.

What are selection screens?

What are classical lists?

Classical lists prior to the advent of ABAP Objects.

Context menus you program yourself.

Files on the Application Server.

Files on the Presentation Server.

Data Clusters in the ABAP Memory.

Installing the Application Server and the Database.

Configuring the SAPLogon and Calling the SAP GUI.

Logging on to the SAP System.

Linking the Basis Documentation to the SAP Library.

However, ABAP is more than just a language. It is embedded within a complete development environment with all the editors, tools and repositories needed for large and complex software development projects. A large number of services contained in SAP’s application server middleware infrastructure can also be addressed readily and independently of a particular platform.

I am delighted that the two authors, Horst Keller and Sascha Krüger, have taken it upon themselves to portray the object-oriented basic structure of modern ABAP alongside the full scope of the programming concepts developed over time in ABAP. Within a single book they offer the reader the distinct advantage of being able to find descriptions of both the new concepts of object-oriented development with ABAP Objects and the older technologies of earlier releases — a knowledge of which remains essential due to the volume of ABAP code still in existence.

I hope that this book will bring all readers further joy and success in programming in ABAP.

As a member of the board of SHS Informationssysteme AG it is a particular pleasure for me that our employee Sascha Krüger has found time in his busy schedule to publish the present book on ABAP Objects together with Dr Horst Keller. Practical and customer-driven implementation based on a thorough theoretical grounding in technological developments as well as dedication is the sole basis for any successful project.

In the past SAP has played a significant part in the development of standard ERP software and will, in particular through mySAP.com, continue to do so in the future. From the position of our company, SAP’s development in CRM (Customer Relationship Management) with new technological and strategic market orientation is of particular interest in this respect. Following the ERP boom of the past two decades, these
customer-oriented systems are now in widespread use throughout companies — above all in the telecommunications industry with its enormous growth in new customers.

Anyone wishing to be successful in this kind of market must come to terms with the SAP Basis technology in order to integrate CRM systems in their existing IT landscape. As many leading companies implement the SAP System, this requires innovative concepts. Not least through the use of EAI (Enterprise Application Integration) tools, object-orientation is being increasingly established as the standard in integration. With ABAP Objects, SAP is intensifying its support of object-oriented (outbound) development and thereby allowing the seamless integration of different object models such as DCOM and CORBA.

The present book by Dr Horst Keller and Sascha Krüger is an introduction to the new world of ABAP Objects and will give you an understanding of how to start with or change to a new programming model. Our wish for both authors is that this book will soon become the standard for the new type of object-oriented development under SAP and will become an indispensable resource in practical applications.

Member of the Board

In recent years the ABAP programming language has undergone an enormous development, the latest stage of which has been the gradual introduction of ABAP Objects between Releases 4.0 and 4.6. Of the books concerned with ABAP currently available on the market, only a few really get to grips with the new language concept. Those that refer to ABAP Objects do so only in terms of a supplement to existing material. This situation therefore led us to write the present book on ABAP Objects. As, however, ABAP Objects cannot be considered in isolation from ABAP as a whole, it developed into a comprehensive description of the ABAP programming language based on the current Release 4.6.

If you compare the current scope of the language with that of Release 3.0, for which the last official ABAP book KRE96 was written, you will find many other new additions apart from the introduction of ABAP Objects. These include the integration of the ABAP type concept into the ABAP Dictionary, the introduction of new internal tables, the possibility of using GUI controls and not least the redesigned ABAP Workbench, to name but a few. All these new concepts have finally transformed ABAP from a language focused on generating lists and processing transactions to a universally applicable programming language. This development required us to present ABAP from a universal standpoint, with less emphasis on the earlier programming paradigms of reporting and dialog programming. In this context, it has been helpful that the book has been written jointly by an SAP employee and an external consultant. The insider view from a member of the ABAP Language Group, with precise ideas as to how ABAP should be used, has blended well with the view of an external user with a knowledge of ABAP gained from training seminars, previous publications and daily experience. We have used the synergy effect resulting from these different viewpoints to provide you with a thorough and yet practical guide to ABAP Objects.

Certainly, we could not have successfully concluded this project without the direct and indirect contribution of many people in drawing up and checking the manuscript. We are grateful to the following colleagues from the "ABAP and GUI" department of SAP who despite their many duties found time to proof-read the sections on their specialized subjects: Thomas Bareiß, Adrian Görler, Mathias Hanbuch, Rolf Hammer, Peter Januschke, Ulrich Koch, Andreas Neubacher, Helmut Prestel, Andreas Simon Schmitt, Werner Schuster, Christoph Stöck, and Ralf Wendelgass. In particular we thank Mrs Kerstin Gebhard from the ABAP Training Development department who read large parts of the manuscript and was always on hand to provide constructive criticism. We would like to thank the students Wolfgang Kiess and Torben Simon for creating the ABAP system field overview and proof-reading some of the chapters. Jürgen Heymann kindly provided us with the object-orientation literature references. We would also like to thank anyone else we have not mentioned but who has suggested improvements along the line.

We have Michael Demuth’s initiative to thank for the fact that the accompanying CDs contain an SAP Basis system including the example programs from this book. Andrea Fritsch entered the examples into the system and created the template. Jürgen Krüger supported us with the downloadable files for the transport request for the example programs. For the program for generating training data we used an ABAP training template from Thilo Buchholz. Lastly, we would like to thank also Tomas Wehren and his team from Galileo Press, in particular Iris Warkus, for their cooperation.

For the English edition we would especially like to thank Gabriele Buchner, Michèle Coghlan, and Julie Plummer from Product Management (Development Platforms) for their indispensable commitment during our technical editing of the translated text.

Horst Keller would also like to thank the Development Manager of the ABAP Language Group, Andreas Blumenthal, for all his support with the project in providing all the necessary resources and many useful hints. Above all he is indebted to his wife Ute for her patience and encouragement over the many evenings and weekends he spent working on the book.

Sascha Krüger would like to thank Stefan Möller, board member of SHS Informationssysteme AG, and the manager of the Cologne office, Frank Pensel, for their support. He would also like to thank his SHS project team for their excellent cooperation which allowed him to spare the time for writing this book. Particular thanks go to his wife Katja who continued to support his authoring commitments throughout, despite the restrictions it placed on their private life.