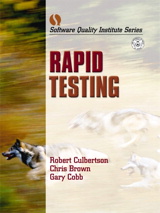 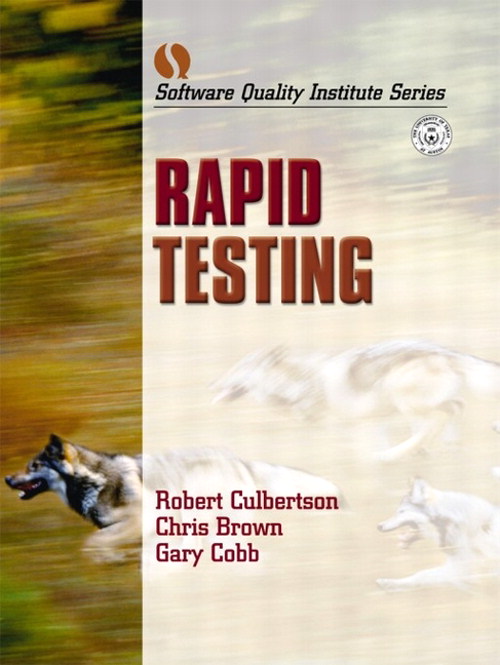 Today, software has to be developed more quickly than ever -- at higher quality than ever. Testing is more important than ever -- but it must be performed at breakneck speed. Rapid Testing examines every aspect of software testing, identifying methods, tools, tips, and techniques that accelerate testing while at the same time improving software quality. Its proven solutions are supported with practical examples, templates, and checklists that can be used to jumpstart any testing process. Rapid Testing presents a systematic approach to aggressively rooting out bugs early in the development lifecycle, and streamlining every stage of the testing process: planning, design, execution, verification, validation, and reporting. The book's extensive examples, best practices, and templates make it an ideal resource and quick reference for everyone with testing and software quality responsibilities.

1. When Time To Market Is Everything.

This book presents a practical approach to software testing, placing emphasis on a test process that is geared to today's aggressive pace of software development. It is designed for use by practicing test engineers and test managers, and includes tips, techniques, and examples that can be used to improve the efficiency and speed of software testing. The book should also be suitable for people who are beginning a career in software testing. It includes an extensive set of references that are intended to support established test professionals as well as those just starting out.

The following features of this book are intended to help you improve your software testing efficiency:

How the Book is Organized

This book consists of three parts that are organized as follows:

Part I. The Rapid Testing Process—This part defines the basic concepts and terms related to software testing. It describes rapid testing processes that are closely integrated with the overall software development life cycle. The traditional waterfall development model is considered, as well as life cycles based on incremental delivery and evolutionary prototyping. Each phase of the software development process is examined from the viewpoint of the software test engineer, and methods of bug detection and prevention are described as means of improving test efficiency.

Part III. Rapid Testing Examples—Part III contains a set of examples for the process and techniques discussed in the first two parts of the book. The examples are based on the Test Management Toolkit (TMT), which is a pedagogical application that allows test managers and engineers to manage test plans, bug reports, test results, and other information related to software testing. It is a web-based application that permits several users, even when geographically dispersed, to support one or more test projects simultaneously.

There are examples of four key work products related to the test process:

Gary Cobb has pursued a dual career of teaching and working in industry in the Austin area over the last 25 years. He has taught in the University of Texas at Austin Departments of Mathematics, Computer Science, and Electrical and Computer Engineering. He has also taught multimedia courses for the Department of Computer Science at Southwest Texas State University, where he was the Director of the Multimedia Laboratory. His industrial experience includes full-time employment at Texas Instruments Inc., Lockheed Martin, and Dell Computer Corporation. He teaches short courses for the University of Texas' Software Quality Institute, which also sponsored his development of the Software Criteria for the Greater Austin Quality Award. Gary has a Ph.D. in mathematics from the University of Texas in Austin.

Chris Brown has over 20 years experience in the software and computer industry. He has worked in various testing roles at Advanced Micro Devices, Cisco Systems, Compaq Computer Corporation, and IBM. At AMD he was responsible for systems level silicon validation and compatibility testing of all available hardware and software configurations. At Compaq he was responsible for scripting and testing of prototype and pilot computer systems for the Portable Products Computing Division. Chris was the team lead for OS/2 Database Manager, Communications Manager, LAN Transport and LAN Manager defect support while at IBM. He was President/CEO of Computer Security Corporation, a company that sold virus protection software to the United States Air Force, Prudential, Boeing, and other major companies and labs. He also served as a Regional Manager and Vice President at Dataserv Computer Maintenance/BellSouth, where he was responsible for field maintenance of over 40,000 computers. Chris has a Bachelor of Science degree in Electrical Engineering and an MBA.