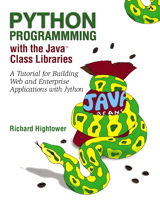 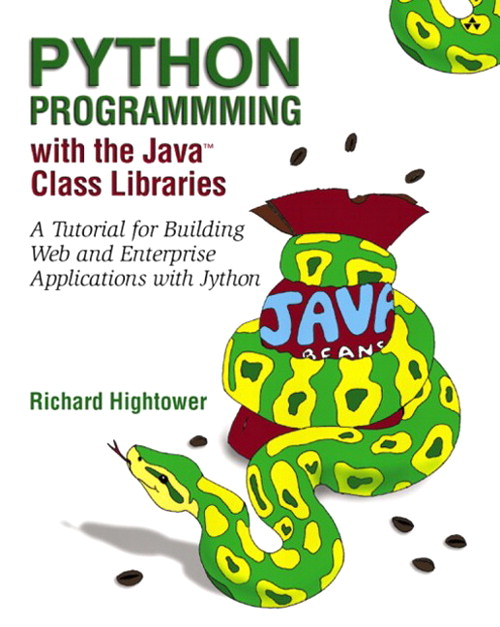 Python Programming with the Java? Class Libraries: A Tutorial for Building Web and Enterprise Applications with Jython

Python and Java are natural team-mates. Using Python together with the Java class libraries, developers at all levels can leverage Python's simplicity and Java's power together, building advanced Web and enterprise applications with remarkable speed and efficiency. Richard Hightower shows how, from start to finish. Using step-by-step examples, Hightower introduces the fundamentals of Python and object-oriented programming. You'll learn how to work with files, use Python's intrinsic functionality, and take advantage of Python's powerful string handling capabilities. Next, Hightower shows how to interface with Java APIs; how to build Swing graphical applications more easily with JPython; and, how to utilize SQL and JDBC to access enterprise data from Python programs. An important section shows how to use Python to solve problems that would otherwise require far more complex Java coding. For all Python programmers who want to take advantage of the Java class libraries. And. for all Java developers seeking faster, more efficient ways to build Web and enterprise applications.

Operators and String Formatting in Python

(NOTE: Each chapter concludes with a Summary.)
Preface.
1. Jython Overview.

Programming, Briefly.
Learning Python First.
Python the Language.
Starting with Python.
Basic Functions with Python.
Python as a Main Program.
The Fast Track.
The Power of Python.
Where Do You Go from Here?

5. Organizing Your Code.
Evolution of a Programmer.
Code Blocks and Namespaces.
Modules.
Functions and Methods.
Putting Things Together.
Classes.
Packages.
Globals and the Global Statement.

15. Graphics and Events.
A Quick Graphics Tour.
A Quick Tour of Common Events.
Putting Things Together: A D

Python is a dynamic programming language with the power of well-known languages such as Java, C++, and Smalltalk, but is leaner and meaner than any of them. Even so, Python is very expressive--it doesn't talk much, but it has a lot to say.

Python has another plus: It has the simplicity of languages such as VB Script or Java Script, which makes it easy for beginning programmers to learn. Those who know their way around a computer can pick it up quickly, particularly if they have ever created a spreadsheet that graphs and organizes data, written spreadsheet formulas, or created a Web page. For those who have, say, written macros or batchfiles, or programmed in any language, using Python will be a breeze.

Python was derived from a language called ABC, which was co-created by Guido van Rossum in the early 1980s. The hope was that ABCs designed-in ease of use would become popular as a way to get up to programming speed quickly and painlessly. This hope didnt pan out, so van Rossum began a new project, Python, which debuted in 1990. He didnt forget ABC; in fact, there is a lot of ABC in Pythons concise syntax and elegant expression, as well as its ease of use. The formula workedit succeeded where ABC failedand Python has stood the test of time.

Put simply, this books goal is to teach programming using Python. You will learn the workings of Python and how to apply them, particularly for the following:

You may not understand these concepts now, but thats the point. You will by the end of the book.

If youre looking for a full language reference you wont find it here. What you will get is enough knowledge about Python to get started with programming on your own. The book will remind you often that the best way to learn programming is by doing it. Thats why there are a lot of hands-on exercises in the form of interactive programming sessions, which you can follow along with at the keyboard as you read.

Each chapter begins with a list of terms that are explained and/or used throughout the chapters and book. These are set in bold on their first mention.

If youre not a member of the novice group, then youre probably an experienced programmer who is reading this book to learn a quicker and more powerful, higher-level language. For simplicity, this group is referred to as programmers.

Now lets get into the tour of Python--the destination is worth the trip.