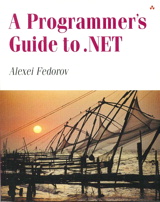 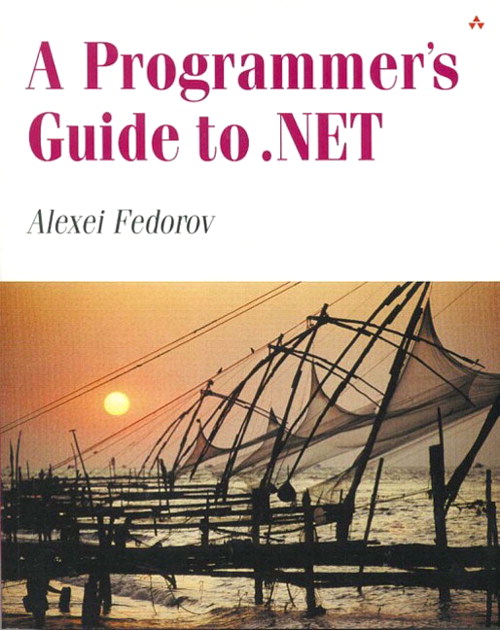 A Programmers Guide to .net

This chapter provides an overview of the .NET class library and some of the commonly used classes. It starts with the overview of System Namespace, then dissects such namespaces as System.Drawing (GDI+), System.Globalization and System.Resources, System.IO, System.Net and Microsoft Namespace.

We also briefly discuss System.Data, System.Web and System.XML namespaces providing a links to other chapters, that contains more dtailed information.

For each namespace listed above we provide an overview, list of main classes, list of tasks, where this namespace can be used, as well as usage examples

This chapter starts with an overview of Active Server Pages in its current implementation (ASP 3.0 under IIS 5) and then outlines the major problems with the current technology. Then it moves to discussion of the main features found in ASP.NET.

After this we discuss the System.Web.UI Namespace, its classes and methods, then introduce the concept of Page class and server-side proceeding, noting how this approach changes the whole code/event flow of the ASP.NET applications. Having done this we start to discuss the HTMLControls and WebControls, providing comparisons and tips on when and where to use one of another type of server-side controls.

We end this chapter with discussion of the new caching and security features of ASP.NET.

Here we provide an overview of the existing version of ADO (2.6 + 2.7 Beta) and show the main changes, found in ADO.NET. Then we show ADO.NET architecture, introduce the concept of Managed Providers and dissect the System.Data namespace, as well as System.Data.OLEDB and System.Data.SQLClient namespaces.

We start with an overview of the role of XML in the entire .NET, as well as in modern enterprise solutions. Then we discuss the classes, implemented in the System.XML namespace and System.XML.* namespaces. We provide XML usage examples for both Windows and Web-based applications. We also show how XML-based data can be utilized though data access classes and shown with data-aware controls.

8. Software as a service - Web Services

This chapters provides an overview of the Web Services concept, related standards. Then it moves to System.Web.Services Namespace and classes it provides. Then we show the steps required to create Web Service Servers and Consumers. We show how to create consumers using .NET, as well as using ASP-code. We end this chapter with the discussio

A Programmer’s Guide to .NET. This book will teach you about the .NET Framework, its architecture, main components, and supported technologies. Here are brief summaries of the contents of the chapters in this book.

Chapter 6, ASP.NET and web forms, shows how to use Microsoft .NET to create web applications with the help of two technologies — Active Server Pages .NET (ASP.NET) and web forms.

ASP.NET server controls are covered in Chapter 7, where we learn about this set of classes, which we can use to create an ASP.NET applications user interface.

The eighth chapter focuses on Windows forms. Here we explore the .NET Framework library classes that allow us to create Windows applications. We discuss the "real" Windows applications that run on the desktop under Microsoft .NET. Such applications can have windows, controls, can draw graphics, and react to keyboard and mouse events.

Chapter 9, Windows forms controls, starts our two-part discussion of these controls. Here we learn about such standard controls as buttons, text controls, labels, lists, and menus. For each group, we provide a list of classes that comprise it, as well as detailed descriptions of each class, its properties and methods, as well as usage examples.

The tenth chapter is entitled Additional Windows forms controls. In Chapter 9 we learned how to make the most of the standard Windows controls — text boxes, buttons, check boxes, radio buttons, list boxes, and so on. The Microsoft .NET Framework class library contains controls that extend the basic set of controls found in Windows. In Chapter 10 we learn about these additional controls, as well as how to use ActiveX controls in web forms.

In Chapter 11, Graphical functions and GDI+, we explore graphical functions available in the System.Drawing namespace and its secondary namespaces. We start this chapter with an overview of the graphics device interface (GDI) and its advanced version — graphics device interface plus (GDI+), then move on to a discussion of the System.Drawing namespace and its secondary namespaces. The second part of the chapter is dedicated to printing in .NET applications and the third part to talking about using graphics functionality in ASP.NET applications.

Chapter 12, Working with Data — ADO.NET, explores the ADO.NET — the data access component of the .NET Framework. As with the ASP.NET, ADO.NET is not just a new version of Microsoft ADO — it is a completely new data access architecture based on managed providers and a set of classes that we discuss in this chapter.

The penultimate chapter, Working with XML, is about XML support in the Microsoft .NET Framework. XML is the universal format for data on the web. It allows developers to easily describe and deliver rich, structured data from any application in a standard, consistent way. XML is at the core of many features of the Microsoft .NET Framework — configuration management, object serialization, remoting, web services, database access, and file storage.

The last chapter, Building and consuming web services, provides information about web services — reusable web components that can be invoked from any platform capable of communicating over the internet. Web services expose their functionality via standard web protocols such as HTTP and XML and enable us to interconnect web applications. We can say that web services are URL-addressable resources that return requested information to a client or manipulate the data model behind the web service.

In the appendix, a list of selected web resources is provided.All code examples in this book are provided in Visual Basic .NET, but it should not be a problem to port the code to other .NET languages — the code illustrates the usage of .NET Framework rather than the programming techniques of VB.NET.