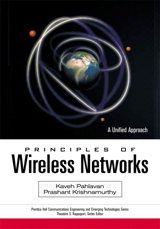 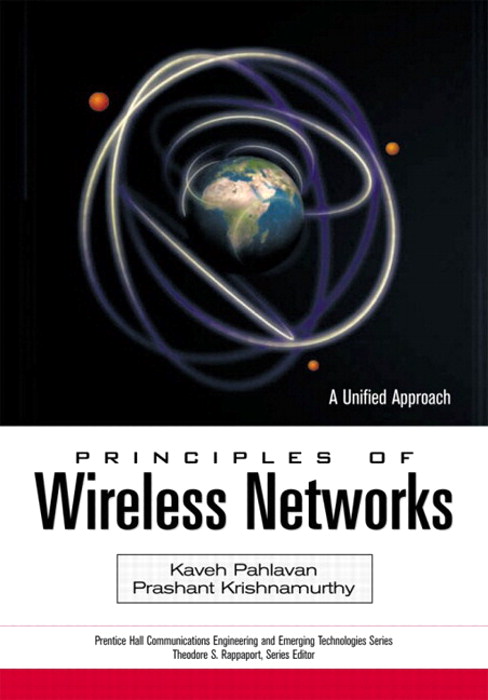 A unified foundation for understanding and building any wireless network.

Whether you're an electrical engineer, telecommunications/networking specialist, or software professional, Principles of Wireless Networks brings together the insights and techniques you need to begin building any wireless system.

Wireless Networks: Where We Are, Where We're Headed

I. PRINCIPLES OF AIR-INTERFACE DESIGN.

2. Characteristics of the Wireless Medium.


Introduction. What Is GSM? Mechanisms to Support a Mobile Environment. Communications in the Infrastructure. Questions. Problems.


Introduction. What Is Wireless ATM? What Is HIPERLAN? HIPERLAN-2. Questions. Problems.


Introduction. What Is IEEE 802.15 WPAN? What Is HomeRF? What Is Bluetooth? Interference between Bluetooth and 802.11. Questions. Problems.

Wireless networking has emerged as its own discipline over the past decade. From cellular voice telephony to wireless access to the Internet and wireless home networking, wireless networks have profoundly impacted our lifestyle. After a decade of exponential growth, today's wireless industry is one of the largest industries in the world. At the time of this writing, close to one billion people subscribe to cellular services, close to 200 billion GSM short messages are exchanged yearly, and the penetration of the cellular telephone in Finland exceeded 75%, the highest in the world. In response to this growth, a number of universities and other educational institutions have started wireless research and teaching programs and a number of engineers and scientists are re-educating themselves in this field. There are a number of recent textbooks in the general area of networking that also address some aspects of wireless networks. The treatment in these books is not adequate because design and analysis of wireless networks are very different from wired networks. In wireless networks the complexity resides in the design of air-interface and support of mobility, neither of which play a dominant role in wired networks. Therefore, we have always needed a comprehensive textbook on wireless networks that provides a deeper understanding of the issues specific to the wireless networks.

In 1995 when wireless networking was an emerging discipline, the principal author, along with Allen Levesque, wrote the first comprehensive textbook in Wireless Information Networks that addressed cellular and PCS systems as well as mobile data and wireless LANs. Wireless-related books published prior to that book were focused on analog cellular systems. Wireless Information Networks covered 2G digital cellular systems, had significant emphasis on physical layer issues, and was written for students with background in electrical engineering, especially communications and signal processing. With the growth of the wireless industry in the latter part of the past decade, several books have emerged that explain the latest developments of specific standards or groups of standards like GSM, IS-95, W-CDMA, wireless LANs and Bluetooth. However, there is no textbook that integrates all the aspects of current wireless networks together. In this book, like the previous book, we address the need for a comprehensive treatment that provides a unified foundation of principles of all voice- and data-oriented wireless networks. The novelty of this book is that it covers 3G and wireless broadband ad hoc networking as well as 2G legacy systems, places emphasis on higher-layer communications issues, and is written for software and systems engineers as well as modern telecommunications engineers with electrical engineering or computer science backgrounds.

Traditionally, voice-oriented wireless networks have been the focus of books on wireless systems. However, with the exponential growth of the Internet, wireless data-oriented networks are also becoming very popular. The third generation (3G) wide area cellular systems are designed to support several hundreds of kbps with comprehensive coverage and up to 2 Mbps for local selected zones. Even before the emergence of 3G services, mobile data networks such as the general packet radio service (GPRS) over TDMA systems and high-speed packet data over CDMA systems are becoming increasingly popular. At the same time, after the introduction of Bluetooth technology in 1998, local broadband and ad hoc wireless networks have attracted tremendous attention. This sector of the wireless networking industry includes the traditional wireless local area networks (WLANs) and the emerging wireless personal area networks (WPANs). Wireless broadband and ad hoc networking is expected to create a revolution in the future of Internet access, home networking, and wireless consumer products. While there is a plurality of standards and a differentiation between voice and data networks, the essential aspects of wireless systems remain the same. We see that wireless networks share a common foundation in the design of the physical layer, medium access, network planning and deployment, and network operation. Principles of Wireless Networks: A Unified Approach emphasizes this similarity hidden in the diversity of wireless networks.

The structure and sequence of material for this book was first formed in a lecture series by the principal author at Digital Equipment Corporation in 1996. The principal author also taught shorter versions of the course focused on broadband and ad hoc networking in several conferences and industrial forums. The core of the book is based on presentation material and reference papers prepared by the principal author for a course called "Wireless Mobile Data Networks" first taught in spring 1999 as a fourteen-week, 3 hour/week graduate course at Worcester Polytechnic Institute, Massachusetts. In summer 1999, he also taught another ten-week, 3 hour/week, version of the course titled "Advances in Wireless Networks" at the University of Oulu, Finland. The co-author of the book has taught material from this book in spring 2000 and summer 2001 at the University of Pittsburgh in a course entitled Mobile Data Networks. These courses were taught for students with electrical engineering, computer science, and networking backgrounds, both from the academia and the industry.

Providing an overall organization for understanding both legacy voice-oriented and emerging data-oriented wireless networks for a diverse audience comprising managers, engineers, scientists, and students who need to understand this industry is very challenging. If we provide an in-depth treatment of specific topics related to the air-interface, such as channel modeling or modem design, we lose the overall systems-engineering perception. If we avoid the details of air-interface, there will be no wireless content, as this forms the core of the difference between wireless and wired networks. Our approach has been to try striking a balance between intuitive understanding of the wireless medium and detailed aspects of the system. We divide the topics in three categories: (1) overview, comparative evaluation, and logical classification of important standards, (2) explanation of principles of design and analysis of wireless networks, and (3) detailed description of important wireless systems. Overview of the popular standards is treated in Chapter one. Principles of wireless network design and analysis is divided into principles of air-interface design (Chapters 2-4) and principles of network deployment and operation (Chapters 5-6). System descriptions are divided into two parts covering legacy wide area wireless networks (Chapters 7-9) and emerging broadband local and ad hoc wireless networks (Chapters 10-14). The partitioned structure of the book allows flexibility in teaching the material and makes it easier for the text to be used as a reference book as well. Therefore, depending on selection of the material, depth of the coverage, and background of the students, this book can be used for senior undergraduate or first- or second-year graduate courses in computer science (CS), telecommunications, electrical and computer engineering (ECE), or electrical engineering (EE) departments as one course or a sequence of two courses.

In the last offering of the course at WPI to ECE and CS students, the first two weeks were devoted to the introduction of wireless networks. The first week was a lecture entitled "Overview of Wireless Networks" from Chapter 1 that provided the overall structure of the standards and trends in wireless networks. The second week was a lecture on "Overview of Networking Aspects" from Chapter 5 that clarified the technical issues that are related to wireless networks. The next part of the course (about six weeks) involved the detailed technical aspects of wireless networks. This part began with a lecture on "Characteristics of Wireless Medium" from Chapter 2. The next lectures in this sequence were from Chapter 5, "Principles of Network Planning" that spanned two weeks. This was followed by "PHY Layer Alternatives" from Chapter 3 that together with the next lecture on "Medium Access Alternatives" took three weeks. At this stage students were ready to understand the details of standards so that a two-week lecture on "GSM--An Example of TDMA Technology" could follow. This was a detailed treatment of an overall structure of GSM from Chapter 7. This lecture was followed by a one-week lecture on "CDMA Technology: IS-95 and IMT-2000" from Chapter 8. Wireless broadband and ad hoc networks formed the last four weeks of the course with the first lecture on "Wireless LANs and IEEE 802.11" from Chapters 10 and 11 followed by a one-week lecture from Chapters 12 and 13 on "Voice-Oriented HIPERLAN-2 and Bluetooth." We spent approximately two weeks on administration of the exams and presentations by students. The students had weekly homework that consisted of a set of questions and some problems relevant to the lecture. They were also required to do a mandatory project on handoff and an optional term paper.

The Finnish version taught at the University of Oulu to EE and CS students roughly covered the same material in ten three-hour lectures. In a period of several months after the lectures, two examinations were arranged, and the students performed a project mandated for completion of the course. The emphasis on lectures in Finland was on the last part of the book as students had prior exposure to GSM and W-CDMA systems. The principal author has also used the last five chapters of this book with parts of Stalling's book Local & Metropolitan Area Networks in a 30-hour lecture course entitled "Wired and Wireless LANs" at the University of Oulu for students from university and the industry in the summer of 2001. The flexibility in using the book can be seen from the course "Mobile Data Networks" taught by the co-author of the book in spring 2000 and summer 2001 at the University of Pittsburgh. The course spanned a quick review of the first part of the book and some parts of Chapter 7 followed by Chapters 9-14 that primarily considered wireless data networks.

Most of the writing and preparations of the principal author took place in several months of his teachings and scholarship at the University of Oulu, Finland, as the first non-Finn Nokia Fellow in 1999 and the first Fulbright-Nokia scholar in 2000. He would like to express his deep appreciation to Nokia Foundation, Fulbright Foundation, University of Oulu, and Worcester Polytechnic Institute for allowing these opportunities to occur. In particular he appreciates the help of Prof. Pentti Leppanen, director of the Telecommunication Laboratory at the University of Oulu, for his continual encouragement and creative administrative support and Dr. Yrjo Neuvo, Executive VP and CTO of Nokia Mobile Phone, for his support through the Nokia Foundation. Also, he appreciates Prof. John Orr, Head of the ECE department, and Provost John Carney, Vice President of Academic Affairs of WPI for their support and understanding, in particular during the Fulbright-Nokia scholarship period. The co-author's involvement in this project began during his stay at CWINS in WPI and extended into his current position at the University of Pittsburgh. At the University of Pittsburgh, he has been involved in the Wireless Information Systems track in the Master of Science in Telecommunications with Profs. David Tipper and Joseph Kabara, who have helped him immensely in his teaching and research work. The director of the Telecommunications Program at the University of Pittsburgh, Prof. Richard Thompson, and the chair of the Department of Information Science and Telecommunications, Prof. Martin Weiss, have fostered an environment that supports innovation and freedom, which has been a significant reason behind the co-author's ability to contribute to this book. He would also like to thank his colleagues, Profs. Sujata Banerjee and Taieb Znati for their support during the last two years in his academic efforts.