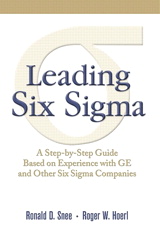 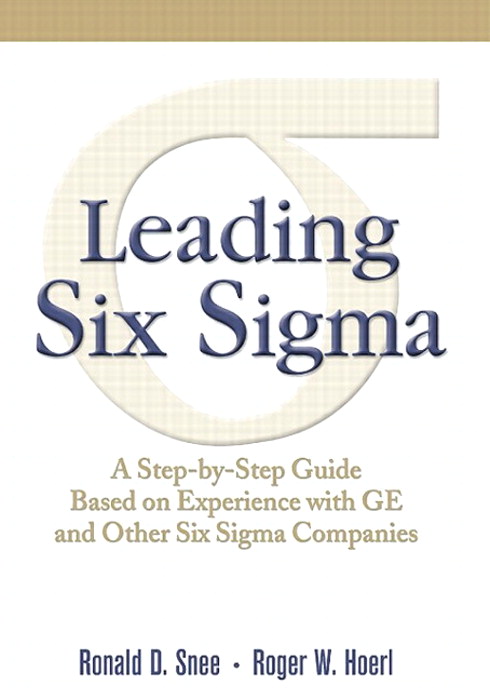 Leading Six Sigma: A Step-by-Step Guide Based on Experience with GE and Other Six Sigma Companies


Why You Need This Book. An Overview. Roles of Six Sigma Leaders. Summary. References.

2. Four Case Studies: What Works and What Doesn't.

3. How to Successfully Deploy Six Sigma.

Six Sigma is about radically improving the performance of an organization-a pursuit to which we have collectively dedicated more than fifty-five years of our careers. We first worked together at DuPont in the early 1980s. We continued our professional relationship over the years and, in 1995, we both independently began our work in Six Sigma. Having been involved in improvement efforts most of our careers, we were both amazed at the tremendous financial results produced by Six Sigma. We continued our discussions of Six Sigma over the next several years as we deployed the method in different organizations.

While we began to see numerous books on Six Sigma, they tended to either be focused on the technical tools of Six Sigma, or were using hype and fanfare to sell the reader on implementation. Our colleagues and clients, on the other hand, were raising deeper issues about how to actually deploy Six Sigma and avoid potholes along the way. These questions highlighted to us the paucity of practical guidance on the deployment of Six Sigma. This book represents our attempt to fill this void.

How This Book Can Help You

Six Sigma began at Motorola in the 1980s as a statistical measure of process performance. AlliedSignal and General Electric (GE) broadened and further popularized the approach in the 1990s. Their successes encouraged other companies such as DuPont, Dow Chemical, 3M, Ford, American Express, and companies in Europe and the Pacific Rim to undertake Six Sigma initiatives. The methodology has evolved significantly along the way, and today Six Sigma has grown into a holistic strategy and methodology for improving the performance of an organization. Six Sigma integrates the improvement tools that have proven effective over the years into a comprehensive approach that improves both customer satisfaction and the bottom line. As a result, Six Sigma builds on what has been successful in the past and takes performance improvement to a new level of effectiveness.

Although the theory is simple, many who implement Six Sigma struggle with the details of overall deployment. Being sold on Six Sigma is of little value if it cannot be successfully implemented. While most companies have experienced tremendous success with Six Sigma, some have not. Our research indicates there is a lack of literature on why this is so. We have examined both very successful and minimally successful organizations in order to understand the root causes for success or failure. We have found that successful companies have important similarities in deployment, as do the unsuccessful companies. Understanding these common success factors enables one to significantly enhance the probability of success, while understanding the commonalities of unsuccessful companies enables one to avoid the potholes.

Of course, each organization is different. You cannot blindly adopt the Six Sigma deployment models used by other companies and expect to be successful. It makes much more sense to understand what specifically led these companies to success, and adapt those approaches and methods to your own organization. Providing a roadmap to do just this is the focus of this book.

What's In This Book

We present a deployment roadmap that has worked in a number of different circumstances. It shows how to get started, manage the important aspects of the initiative, maintain the momentum over time, and eventually how to scale down the initiative and institutionalize Six Sigma. Specific advice is given in such areas as:

Our guidance is based on a total of over fourteen years' experience deploying Six Sigma in large and small companies, manufacturing and research and development (R&D), and non-manufacturing organizations such as financial services. Indeed, we have found that Six Sigma can work everywhere-different cultures, countries, industries, functions, and processes-if you follow the process.

In Chapter 1 we provide an overview of Six Sigma, highlighting the difference between the deployment aspects of Six Sigma and the tools and methods used to conduct Six Sigma projects. To date the lion's share of literature has focused on the methods and tools and virtually ignored the critical subject of deployment. As a result there is precious little in the literature to guide executives as they deploy Six Sigma.

Chapter 2 provides four case studies-General Electric, W. R. Grace and two less successful deployments-highlighting what has worked and what hasn't. Unfortunately, implementing Six Sigma is no guarantee of success. The focus in the press has been on the successes, but there have certainly been failures. As you will see, you can learn from both.

In Chapter 3 we analyze the four case studies to identify success factors for the deployment of Six Sigma. You will see specific reasons why some companies succeeded and others didn't. These factors are identified and integrated into an overall strategy for deploying Six Sigma within an organization. The remainder of the book provides detailed advice on each step of this strategy.

The focus of Chapter 4 is on launching the initiative, probably the most important phase of Six Sigma. If Six Sigma is poorly launched, it will be difficult to reorganize and regain momentum. The pros and cons of full (across the company) and partial deployment are addressed. Particular focus is placed on selecting the right projects and the right people.

Chapter 5 focuses on managing the ongoing effort, highlighting the need for supportive managerial processes and systems. After Six Sigma has been launched, there is often a loss of momentum as other priorities take center stage. It's these management systems that enable Six Sigma to continue to work and change the culture.

Chapter 6 introduces ways to sustain momentum and growth longer term. Using a sports analogy, it focuses on the defensive effort needed to hold the line and the offensive effort needed to score more points. Issues such as system reviews, ongoing training systems, and expanding Six Sigma throughout the enterprise and to suppliers and customers are addressed. The use of Six Sigma as a leadership development tool is also discussed.

Chapter 8 provides additional guidance for leaders: deepening understanding of Six Sigma, ensuring success of individual improvement projects and the overall initiative. Particular attention is placed on helping managers understand what actually goes on in Six Sigma projects without getting buried in the details of the Six Sigma tools.

The concluding section focuses on answers to more than thirty frequently asked questions, and references that will help deepen your knowledge of Six Sigma. These questions have been the most critical that we have been asked by a variety of organizations implementing Six Sigma. They concern issues that almost all those deploying Six Sigma encounter at one time or another. An example deployment plan is shown in the appendix.

How to Use This Book

Using this book as a guide, you can get your Six Sigma deployment process off to a solid start and help assure its continuing success. A body of knowledge of how to properly deploy Six Sigma, as well as the pitfalls to avoid, is provided. You can speed up the deployment and success of Six Sigma if you utilize what those who have gone before you have learned; as such you don't have to reinvent the wheel. Each element of Six Sigma is relatively simple. However, putting it all together is the hard part. This book not only provides a roadmap for deploying Six Sigma but also highlights the keys to successful deployment, and a way to maintain the gains-putting it all together in a single document. By reading this book you will learn what works and what doesn't, learn effective deployment strategies and become fluent in the language of Six Sigma. Of course, a roadmap is not a cookbook-each organization will still need to customize its approach based on its own unique situation.

It is becoming increasingly recognized that Six Sigma is not only an effective process improvement methodology, but also an effective strategy for culture change and leadership development. Six Sigma obviously emphasizes the use of facts and data to guide the decision making process. But the improvement project selection and review, recognition and reward, and communication processes used to support Six Sigma are also effective culture change vehicles. Increasingly, companies are seeing Six Sigma as an effective leadership development methodology with companies such as GE, Honeywell, 3M and DuPont requiring Six Sigma Black Belt and Green Belt experience for managerial advancement.