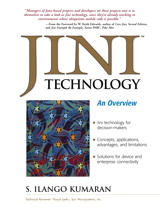 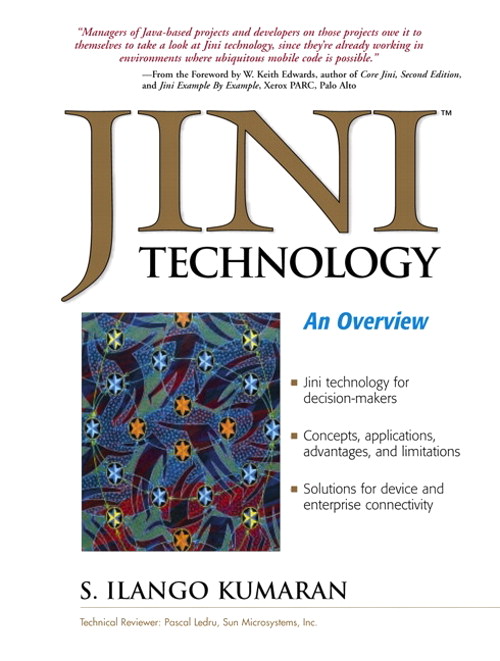 The complete briefing on Jini technology!

With Sun's Jini architecture, virtually any type of service (software component and device) can interact—without worrying about complex protocols, messaging, drivers, operating systems, or cabling. Finally, there's a complete briefing for decision-makers who want to know what it can do for them now—and what it will do for them tomorrow. In Jini Technology: An Overview, Ilango Kumaran covers everything professionals need to know about Jini technology—its goals, applications, advantages, limitations, how it works, and where it's headed next. Kumaran covers all this, and more:

Whether you're an executive, architect, strategist, or investor, Jini Technology: An Overview will help you intelligently evaluate Jini technology—and leverage it for maximum competitive advantage.

"Managers of Java-based projects and developers on those projects owe it to themselves to take a look at Jini techhhnology, since they're already working in environments where ubiquitous mobile code is possible."

(NOTE: Each chapter concludes with Summing Up.)


Who Should Read This Book. How This Book Is Organized. Acknowledgments.

6. Jini at Work: Putting It Together.

8. Jini and Other Java Technologies.

9. Jini and Other Distributed Technologies.

10. Jini and Other Competing Technologies.

11. Looking into the Future: Next-Generation Distributed Computing and Jini.

12. Adopting Jini in Your Organization.

The growth of networks and the Internet has resulted in a new set of requirements for architecting software applications. The evolution of distributed and network-based architectures such as OSFDCE, CORBA, DCOM, RMI, and HTTP/SOAP-based Web services demonstrates the continual change in distributed architecture requirements. With processors and memory becoming cheaper, a redefinition of the "computing device" is on the horizon. Computation is set to become more pervasive, ubiquitous, and mobile. Computer networks are becoming much faster and more reliable. Future networks are going to be dynamic, self-forming, and self-managed. Are current distributed architectures ready to satisfy the upcoming ubiquitous, pervasive, and dynamic distributed computing requirements? The answer is, unfortunately, NO!

The current distributed architectures such as CORBA, DCOM, RMI, and HTTP/SOAP-based Web services suffer from the following limitations:

To sum up, the limitations of the current distributed architectures are glaringly obvious.

Jini, a true service-based architecture, provides a solution for the evolving ubiquitous, pervasive, and dynamic distributed computing requirements. It abstracts both the devices and software under a service notion and supports dynamic community formation and dissolution. Jini technology is

In short, Jini is a true dynamic, distributed service-based architecture.

The book is intended for the following audiences:

Chapter 7 discusses the scope of service abstraction within Jini architecture. This chapter discusses the minimum requirements for a software component or a device to join a Jini community. This chapter also provides a peek into surrogate architecture and provides strategies to Jini-enable low-capacity devices (devices with no processor or memory or network capability).

Chapter 11 discusses the future of distributed computing. It begins with a rationalistic prediction, its requirements, and evolving solution models. Jini is then evaluated and assessed against these identified requirements. This chapter summarizes the various challenges faced by Jini (as of this writing) and Sun's efforts to overcome them. It concludes with some stories of Jini's success.

Chapter 12 provides the information that you should know before adopting Jini in your organization. It covers the Sun Community Source Licensing (SCSL), Jini community organization, and Jini community process. It provides a simple introduction to the Jini Technology Starter Kit (JTSK 1.1) and Jini Technology Core Platform Compatibility Kit (Jini TCK).

Throughout the book you'll find sidebars that supplement the text: