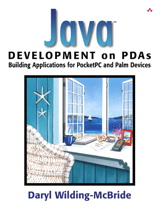 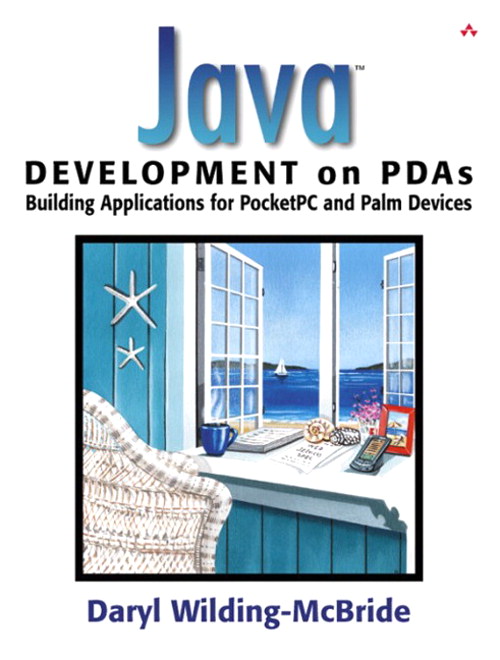 This comprehensive tutorial and reference provides an in-depth look at developing PDA software with J2ME and PersonalJava, covering both Palm and PocketPC devices. Succinct and practical, Java™ Development on PDAs focuses on real-world programming tasks with extensive code examples and an end-to-end PDA application demonstrating techniques for integrating devices with the enterprise via Web services.

This book describes the J2ME platform and PersonalJava and discusses design issues specific to resource-constrained devices. It also provides in-depth coverage of networking and Internet access, the user interface, data storage, and integrating PDAs into the corporation.

You will learn to develop Java applications for PocketPC and Palm devices through in-depth coverage of:

Java™ Development on PDAs concludes with a look into the future of PDA technology and the expanding role of these devices in the enterprise.

Written for anyone with a basic knowledge of Java, this important resource is a must-have for all those interested in the Palm OS and PocketPC markets.

Click for the Source Code related to this title.

Top Factors in Choosing a PDA for Java.

Which Java on Which PDA?

3. Setting Up the Development Environment.

Setting Up the Palm OS Emulator.

Running Java Applications on the Palm.

Running Java Applications on the PocketPC.

4. Things To Think About When Designing for Small Devices.

Networking on the PocketPC.


What is a Web Service?

Setting Up Axis and Tomcat.

Java and PDAs are a powerful combination. In 2003, sales should increase to 19.5 million units. While PC sales have arguably peaked, PDAs are still very much in a growth phase.

Java is also a huge market, with millions of developers working world-wide in all areas of computing: from mainframes to matchbox-sized web servers.

What this book is about

Aside from personal preference for development language though, there are good business reasons to use Java to develop PDA applications. Firstly, your organization may be already using Java to develop enterprise systems. A large amount of time, money, and effort has probably been invested in building up Java expertise, tools and resources.

Thirdly, you may wish to re-use simple business logic in your devices applications that has developed for other applications. You may want to check for a valid credit card number on the PDA application, and you may have a corporation-wide standard class for card number validation.

Any or all of these reasons are good reasons to be interested in Java on PDAs.

Once you want to develop PDA applications using Java, you are faced with some more decisions about which Java to use. There are several options. This book focuses on options that conform to the Java 2 Micro Edition and PersonalJava standards because these are open standards for Java on resource-constrained devices. The standards are open because specifications are created as part of the Java Community Process, which is open to all developers for contributions and review of drafts.

The scope of the book includes developing Java applications for the Palm and PocketPC PDAs using J2ME and PersonalJava respectively. Strictly speaking, PersonalJava is part of the J2SE family rather than J2ME, but it is included in the book’s scope because most PocketPCs already sold and sold today come with PersonalJava installed. Additonally, as I write, implementations of the J2ME replacement for PersonalJava (the Personal Profile, which we will discuss later) have not yet arrived for the PocketPC.

Since the book is focussed on what a developer can do today on a Palm or PocketPC PDA, the J2ME PDA Profile (PDAP) is covered briefly, but the book does not present PDAP code. This is because the PDAP has not yet been finalised in the Java Community Process, and implementations on real devices are not yet available. Hopefully this situation will change soon.

While the applications presented in this book will run on other platforms, such as mobile phones, the specific intent is to focus on applications that run on PDAs and the considerations a PDA developer should keep in mind.

In the book we will consider the end-to-end solution for integrating a PDA into the enterprise, and so the book does includes some server-side code.

Not included in scope is coverage of other PDAs such as the Sharp Zaurus. To make the book manageable, I decided to concentrate on the two dominant products in the PDA market. Also not included is coverage of PocketPCs running operating systems other than WindowsCE, such as iPaqs that run Linux.

The book does not cover Java-like languages for PDAs such as Waba, since they are not based on the open Java standard.

This book is written for developers who already know Java, and who want to write Java applications for PDAs, in particular the PocketPC and Palm devices. It is my intention to present the necessary concepts in practical terms, so that a Java developer can pick it up and start writing PDA applications in Java quite quickly. It assumes that you already have some Java experience with the Standard edition and/ or the Enterprise edition.

This is not a book for people interested in learning Java. If that applies to you, I suggest buying an introductory Java book and downloading Java 2 Standard Edition from www.java.sun.com. Learning Java with J2SE is a much better way to get started.

Rather than bulking up this volume with page after page of source code listings, I have made the source code available for download from the book’s companion Web site at www.javaonpdas.com. This allows me to ensure that the most up-to-date source is available at all times and, as a reader, I would prefer that a book’s volume is taken up with truly useful information. I hope you agree that this is a good idea.

The development platform used in all the examples is Windows. Generally it is noted where tools run on other platforms, but I have not tried to run the tools on other platforms. I have tried to be platform-neutral as much as possible though, so if you are running a desktop operating system other than Windows the book is hopefully still useful to you.