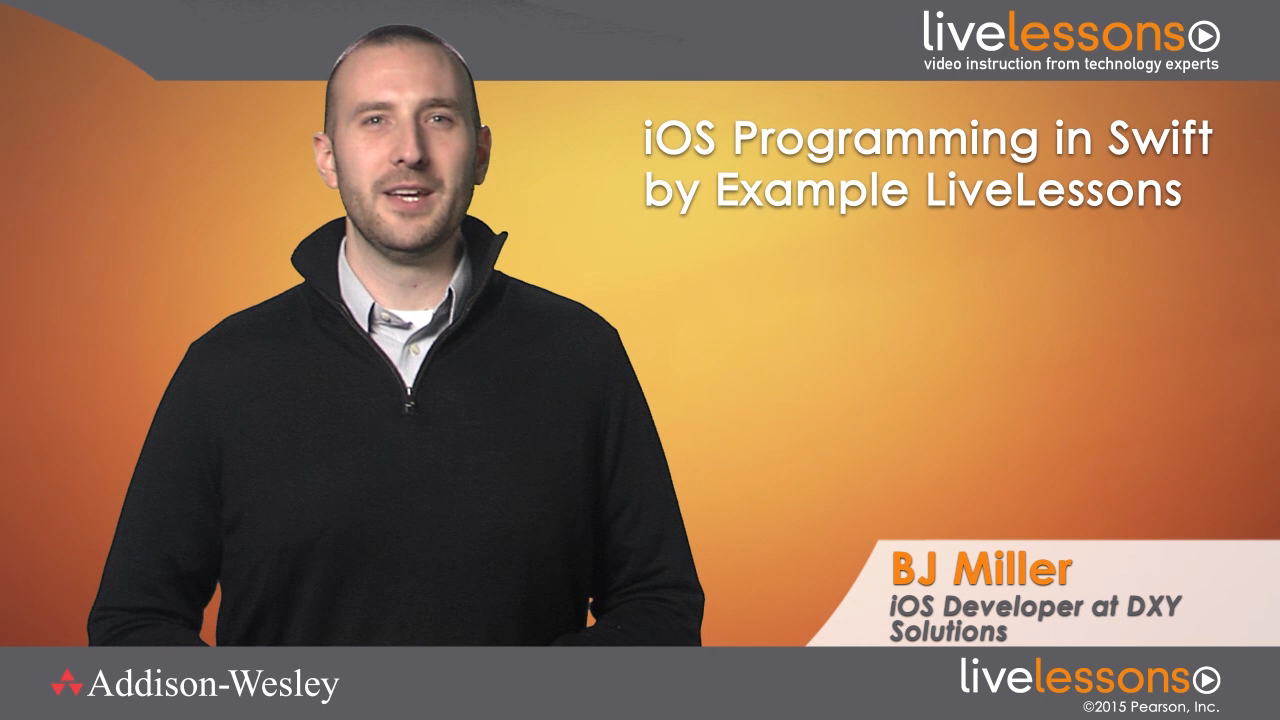 The Swift programming language is an ever-changing work in progress, and the best way to understand how you can use it to build iOS apps and roll with future changes to the language is to learn the fundamentals now. iOS Swift Development by Example LiveLessons provides developers with a solid understanding of Swift coding basics into intermediate-level and some advanced practices, so that they can become even more adept at working with the language as it continues to evolve.

This video training offers developers a practical introduction to programming with Swift, Apple’s proprietary programming language. The video starts with a comprehensive survey of Swift fundamentals, including how to work with playgrounds, Apple’s interactive coding environment. It uses playgrounds to examine Swift’s fundamental structure and language basics, such as loops and conditionals, data types, and much more. Next, the training teaches viewers how to work with functions and closures, define data structures, perform actions using methods, write Swift code that interacts with Objective-C, work with UIKit, and design interfaces using storyboards. The video further covers more advanced Swift topics such as using functional programming paradigms, closures, generic programming, and adding behavior to existing data types with extensions. After watching this video, developers who perhaps have never worked with a functional programming language will understand the differences between Swift and Objective-C, current iOS developers will gain a better understanding of how to incorporate Swift into their application programming practices, and new iOS developers will learn how Swift simplifies the process of building their first (or second) iOS application.

“Covering Swift Basics” familiarizes you with the foundational syntax and gets you started writing Swift statements in Xcode and working with the new read-eval-print-loop (REPL). You learn about features common to most languages, including arithmetic expressions, conditional logic, and iteration, and you learn how to use types to store different kinds of data.

“Defining Data Structures” takes a look at classes, structs, and enums. You learn about the differences between how Swift and Objective-C handle these types. You learn how to create classes, structs, and enums; how to add stored and computed properties to these structures; how to use raw values with enums; how to add initializers; and how to use optional values. You also learn about the initialization phases for initializing instances and about the memory management involved with reference types such as classes and functions.

“Learning Advanced Swift” explores more complex Swift topics. You learn about optional chaining and how to use optionals to your advantage. You then learn how to use extensions in Swift to extend a type’s capabilities without modifying it. You also learn about generics and other introductory aspects of functional programming.

“Using Swift with Objective-C” explains how to integrate the two programming languages within the same project, regardless of whether the project started in Objective-C or Swift. You learn how to bridge data types and recognize the differences in syntax.

“Understanding Cocoa Concepts” covers the Model-View-Controller (MVC) paradigm with respect to iOS development. You learn how to design efficient and well-structured object-oriented code. You learn how to use the MVC paradigm to separate code into manageable and sensible chunks. You learn about the Cocoa Touch view lifecycle and about using delegates and data sources to provide custom actions and data to a requesting object. Finally, you learn how to work with, retrieve, and persist model objects to disk using Apple’s Core Data framework.

“Defining Interfaces with Storyboards” teaches you how to use Xcode's Interface Builder to create the visual layout for your application. You learn how to use Xcode’s Interface Builder component to build storyboards and how to connect its many different UI elements to code. You also learn how to visually lay out an interface using Auto Layout that accommodates devices of various sizes. Finally, you learn how to customize app flow by using segues to handle navigation.

“Creating Apps—Integrating Concurrency and Fetching Network Data” covers the different methods of fetching data from the network. You learn about the differences between synchronous and asynchronous operations, and you learn how to use Apple’s built-in frameworks to assist in creating efficient software. You also learn how to parse JSON. Finally, you learn how to create an entire app using your cumulative knowledge of Swift and Cocoa Touch.