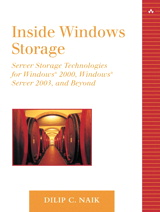 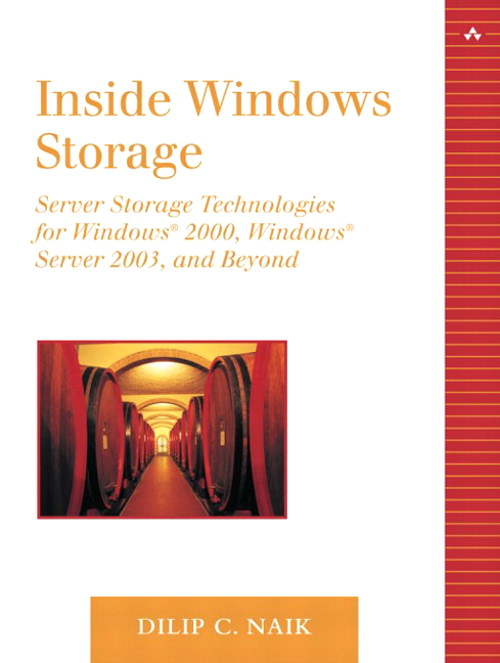 Inside Windows Storage: Server Storage Technologies for Windows 2000, Windows Server 2003 and Beyond

"Dilip Naik's Inside Windows Storage is an invaluable reference for developers and customers alike and is a must-read for anyone wishing to implement Windows-based storage networking."
—Tom Clark, Director, Technical Marketing, Nishan Systems

Inside Windows Storage is the first book to provide a comprehensive look at new and emerging Microsoft storage technologies. The text begins with an overview of the enterprise storage industry and Windows Server architecture, including the Windows NT I/O subsystem. With that foundation in place, readers explore the ins and outs of current Windows offerings, upcoming Windows server releases, and third-party products.

This extensive guide concludes by tracing Windows NT storage features as they appear in Windows NT 4.0, Windows 2000, and Windows Server 2003, and by offering a preview of what to expect from future Windows server releases. In short, Inside Windows Storage will help IT professionals gear up for the major role that Windows servers will surely play in the future of enterprise storage.

Backup and Restore Technologies for Windows

Download the Sample Chapter file related to this title.

Anatomy of a Windows Device Driver.

The Emergence of HBAs.


The Emergence of NAS.


The Need for Fibre Channel.

Centralization and Management of Storage.

Support for a Larger Number of Devices.


Reasons for Backup and Restore.

Backup Classifications Based Upon Architecture.

Backup Types Based Upon Functionality.

Backup Classifications Based Upon Network Infrastructure.

Techniques to Create a Volume Snapshot.

Virtualization in the (Host) Server.

Virtualization in the Storage Hardware.

Virtualization in the Storage Network.

Offline Folders and Client Side Caching.

Reducing the Layers in the Storage Stack.

Gordon Moore, Intel's co-founder once observed that the density of transistors per square inch was doubling every year. Subsequently, the pace dropped a little and the doubling was perceived to be once every 18 months instead of once every 12 months. According to industry analysts, the enterprise storage industry is still beating Moore's law in its growth.

One estimate is that in the next few years, more data will be generated than what was ever created from the entire dawn of known history! Regardless of the exact role, one must concede that Windows servers have an important role to play in the enterprise storage industry. Knowledge of the storage aspects of the Windows operating system will prove to be invaluable in this situation. This book is a humble attempt to meet this perceived need.

This book has been written for the person somewhat conversant with computers systems and the IT industry that is looking to further his/her knowledge about the storage industry in general and Windows NT architecture details as they apply to storage devices. To be clear, this book is about enterprise storage, and consumer storage details are described cursorily, if at all. The book attempts to strike a balance between catering to the software professional who knows nothing about storage and the professional somewhat conversant with storage, but looking for some good insights of Windows NT storage architecture.

If the reader comes away with just one idea after reading this book, that idea is intended to be a deep appreciation of the steady acceleration of enterprise storage related features that each succeeding release of the Windows NT operating system has and will bring to market.

This book attempts to strike a balance between the following aspects:

A word of caution is in order here. This book makes some forwarding looking statements in the form of expected features in forthcoming releases of the Windows NT operating systems. Microsoft has repeatedly made it clear that the only guaranteed way of identifying features in an operating system release is after the actual release. No matter what is said at trade shows, seminars, etc. there is no guarantee that some features tentatively discussed will ever ship, let alone ship with a particular version of the operating system. Hence the forward looking statements in this book are a best guess and should be treated as such. No material plans of any kind should be based upon these guesses.

Any reader who does not appreciate the "Safe Harbor Statement" nature of the previous two paragraphs is highly encouraged to study (and not just read) them again.

The book begins with an overview of Windows NT architecture including the Windows NT I/O sub system and storage driver architectures. This chapter is an attempt to condense the vast amount of information purveyed in the excellent books "Inside Windows NT" (Microsoft Press) and is intended for the reader that does not have the time available to peruse the book in its entirety.

Chapter 2 describes Direct Attached Storage which was historically the first choice for storage.

Chapter 3 describes Network Attached Storage which was the next major mile stone in enterprise storage. The Windows NT network stack is explained in detail, from the point of view of the storage professional.

Chapter 4 describes Fibre Channel Storage Area Networks, a technology that is perceived to be now rapidly maturing and still holding its own in the face of upcoming new technology in the form of IP SCSI and Infiniband

Chapter 5 covers the basics of backup/restore and the new Volume Shadow Copy Service (also popularly referred to as snapshots) in Windows Server 2003.

While the rest of this book is organized into chapters based upon technologies, Chapter 10 is organized by Windows NT releases. Irrespective of what storage technology is being discussed, Chapter 10 traces the storage features as they appeared in Windows NT 4.0, Windows 2000 and expected features in Windows Server 2003 server and beyond. So read on, and I hope, enjoy.

Please send all feedback to DilipN@Niriva.com.