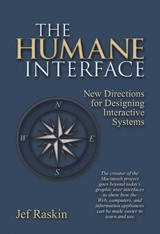 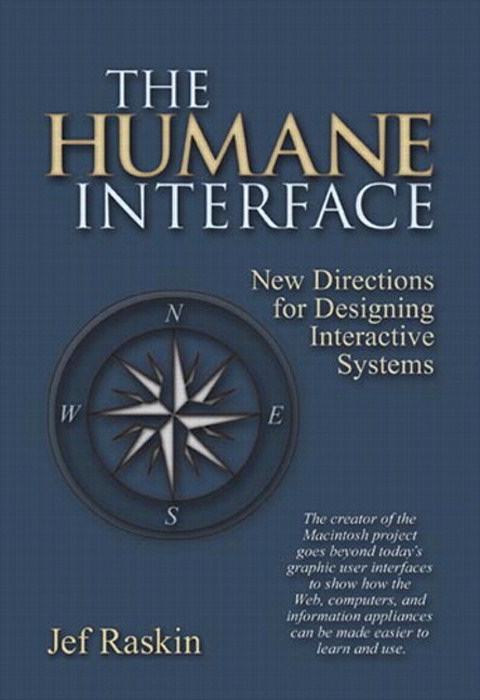 The honeymoon with digital technology is over: millions of users are tired of having to learn huge, arcane programs to perform the simplest tasks; fatigued by the pressure of constant upgrades, and have had enough of system crashes. In The Humane Interface, Jef Raskin -- the legendary, controversial creator of the original Apple Macintosh project -- shows that there is another path. Raskin explains why today's interface techniques lead straight to a dead end, and offers breakthrough ideas for building systems users will understand -- and love. Raskin reveals the fundamental design failures at the root of the problems so many users experience; shows how to understand user interfaces scientifically and quantitatively; and introduces fundamental principles that should underlie any next-generation user interface. He introduces practical techniques designers can use to improve their productivity of any product with an information-oriented human-machine interface, from personal computers to Internet appliances and beyond. The book presents breakthrough solutions for navigation, error management, and more, with detailed case studies from Raskin's own work. For all interface design programmers, product designers, software developers, IT managers, and corporate managers.

Click below for Web Resources related to this title:
Author's Site


Introduction: The Importance of Fundamentals.

Tools That Do Not Facilitate Design Innovation.

Interface Design in the Design Cycle.

Definition of a Humane Interface.

2. Cognetics and the Locus of Attention.


Ergonomics and Cognetics: What We Can and Cannot Do.

Singularity of the Locus of Attention.

Origins of the Locus of Attention.

Exploitation of the Single Locus of Attention.

Myth of the Beginner-Expert Dichotomy.

Other Solutions for Hal's Interface.

Cursor Design and a Strategy for Making Selections.

6. Navigation and Other Aspects of Humane Interfaces.

Messages to the User.

Letter from a User.

7. Interface Issues Outside the User Interface.

Importance of Documentation in Program Creation.

Ethics and Management of Interface Design.


Appendix A: The One-Button Mouse History.

"I don't know what percentage of our time on any computer-based project is spent getting the equipment to work right, but if I had a gardener who spent as much of the time fixing her shovel as we spend fooling with our computers, I'd buy her a good shovel. At least you can buy a good shovel."
--Erasmus Smums

Creating an interface is much like building a house: If you don't get the foundations right, no amount of decorating can fix the resulting structure. The Humane Interface reexamines the cognitive foundations of human-machine interaction to elucidate a crucial aspect of why interface designs succeed or fail. One finding is that present-day graphical user interfaces, such as those of the Windows and Macintosh operating systems, which are based on an architecture of operating system plus application programs, are inherently flawed. A different approach is required if computers are to become more pleasant and if users are to become more productive. This book describes some of the fundamental flaws in user interfaces and describes solutions for overcoming those flaws.

Although the techniques covered in The Humane Interface apply to a wide range of products--including web sites, application software, handheld personal data managers and other information appliances, and operating systems--this book does not present a survey of the field of human-machine interface design. Rather, this book strikes out in new directions while also reviewing those established parts of interface design that are needed in the development of the new material.

If we are to surmount the inherent problems in present human-machine interfaces, it is necessary that we understand the teachings of this volume; it is not, however, sufficient. Many important aspects of interaction design are not included here because they are well covered in the literature. This book is intended to complement existing--or to be a prolegomenon to future--treatments of interface design.

The audience for this book includes

Finally, this book is for human-machine interface researchers, who will find that they will never again be able to view interfaces in quite the same way they did before reading The Humane Interface.

p. xiv add Troy May to the acknowledgments

(Thanks to Martin Portman.)

p. 22, last paragraph. "you can ensure that the user is not confirming..." should have been

" cannot ensure that the user is not confirming..."

But this makes a poor sentence. Better still is

"you cannot protect against a user developing a habit of confirming without reestablishing the decision as the locus of attention, even by making the required confirmation action unpredictable."

p. 23 The paragraph beginning "Requiring this kind.." is missing a last sentence

"While preventing the user from forming a habitual response, such measures also create a new locus of attention; the user may forget to think about the correctness of their prior response altogether, thus frustrating both the purpose of the confirmation and the user."

(Thanks to Rich Morrin for pointing out this error and the previous one.)

p. 88 There is an error in the calculation, it does not affect argument or its conclusions, but for exactness note these changes:

In the next paragraph change

(Thanks to Cam Mitchner for noticing this error)

"The convenience is highly dependent on the ergonomics of the Command keys."

(Thanks to Jon Bondy for this observation.)

p. 117 The following paragraph should be added after the paragraph ending with the word "object":

When a transparent message box would disappear too soon, say when it appeared while you were typing so that the next keystroke would banish it, an attractive alternative is to have the message box gradually fade, like the Cheshire cat, giving the user time to notice it. It is also important to have a document, perhaps entitled "Message Log" where a copy of all messages produced by the system are stored serially, so that they can be inspected at any later time.

(Thanks to Jon Bondy for reminding me about the importance of a message log.)

p. 137 In the illustration, part (c), the insert portion of the cursor should be to the right of the letter "p".

(Thanks to Eric Blossom for carefully thinking through the illustration.)

At the end of that paragraph add,

"Later versions of the manual are not so dogmatic about using icons, but the damage had already been done."

The last sentence of that paragraph (it_s missing a comma, anyway) should be:

"The tendency to overuse graphics has been an impediment to good interface design."

p. 186 In the last two examples, the open single quotes should be close quotes. This is an interesting error in that it shows how an editor facility intended to be helpful, namely "smart quotes" can create an error.

(Thanks to Elisabeth Riba for pointing out this typographical error).