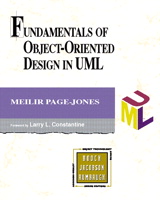 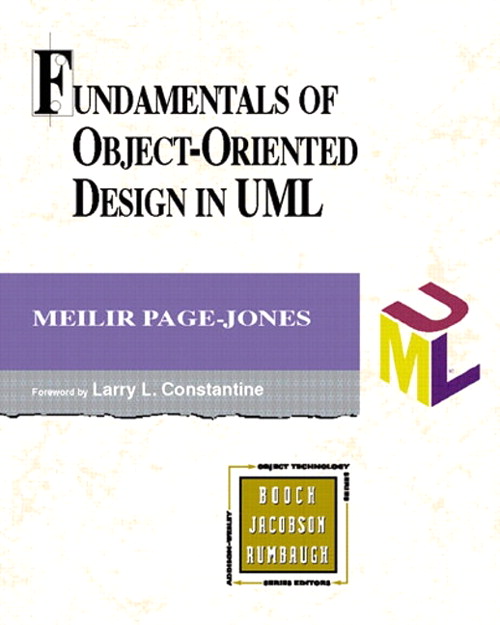 Fundamentals of Object-Oriented Design in UML

Object technology is increasingly recognized as a valuable tool in application development, but what is not yet recognized is the importance of design in the construction of robust and adaptable object-oriented (OO) applications. With the recent introduction and widespread adoption of the Unified Modeling Language (UML), programmers are now equipped with a powerful tool for expressing software designs. Fundamentals of Object-Oriented Design in UML shows aspiring and experienced programmers alike how to apply design concepts, the UML, and the best practices in OO development to improve both their code and their success rates with object-based projects.

In the first two chapters, best-selling author Meilir Page-Jones introduces novices to key concepts and terminology, demystifying the jargon, and providing a context in which to view object orientation. Part II is a practical and well-illustrated guide to UML notation and to building the most useful UML diagrams. Part III grapples with advanced topics in the testing and improvement of design quality, including connascence, level-2 encapsulation, and the use of state-space and behavior to assess class hierarchies. These design principles are explained and demonstrated without reference to any one design methodology so that they are easily accessible and applicable in a variety of contexts. Programmers and designers learn how to assess and enhance their work as the author walks them through the evaluation of designs taken from actual projects and the realistic example that ends the book.

Readers will come away with a better understanding of object-oriented concepts and of how to design and develop the high-quality software their clients need.

1. What does it mean to be object oriented, anyway?

The roles of objects in messages.


Where did object orientation come from?

Alan Kay, Adele Goldberg and others.

Object orientation in a social context.

The history of the mainstream.

To the barricades: the object-oriented revolutionaries.

Forward to the past: the object-oriented reactionaries.

Object orientation as an engineering discipline.

3. The basic notation for classes, attributes and operations.

The basic UML notation for associations.

Polymorphism in the collaboration diagram.

Use of self in messages.

A brief digression: what's object-oriented about a GUI?

The source of classes in each domain.

The use of encumbrance.

The Law of Demeter.

Class cohesion: a class and its features.


State-space and behavior of a class.

The state-space of a subclass.

The behavior of a subclass.

The class invariant as a restriction on a state-space.


The principle of type conformance.

Conformance: the principles of contravariance and covariance.

An example of contravariance and covariance.

A graphic illustration of contravariance and covariance.

A summary of the requirements for type conformance.

The principle of closed behavior.

12. The perils of inheritance and polymorphism.

The danger of polymorphism.

14. Quality of a class interface.


State support in a class interface.

Behavior support in a class interface.

Operation cohesion in a class interface.

"You say you want some evolution. Well, you know, I'm just doing what I can."
-- Charles Darwin, On the Origin of Species

People who reviewed this book in its draft form had several questions for me, questions that perhaps you share. Let me address some of them.

I'm a programmer. Why should I care about design?

Everyone who writes code also designs code -- either well or badly, either consciously or unconsciously. My goal in writing this book is to encourage people working in OO -- and their number increases annually - to create good object-oriented designs consciously and prior to coding. To this end, I introduce notation, principles and terminology that you and your colleagues can use to evaluate your designs and to discuss them meaningfully with one another.

No. Although I occasionally swoop down close to code, this isn't a book on object-oriented programming.

But if I'm learning an object-oriented language, will this book help?

Yes, it will. If you don't currently know an object-oriented programming language, you can begin your object-oriented knowledge with Chapter 1. Knowing the key concepts of object orientation will speed your learning an object-oriented language and, I hope, boost your morale as you move into unfamiliar territory. The later chapters of the book, on sound design, will also help you in getting your early programs to work successfully. On the other hand, if you're already an experienced object-oriented programmer, you can use Parts II and III of the book to enhance the design skills that are vital to your being a rounded, professional software designer or programmer.

Why aren't the code examples in this book in C++?

I've written the code in this book in a language of my own devising, which is a blend of four popular languages: C++, Eiffel, Java and Smalltalk. I did this because there are two kinds of programmers: those who are fluent in C++ and those who aren't. If you're a C++ aficionado, then you'll find the code a breeze to translate into C++. If you're not familiar with C++, then you might have found the language's arcane syntax getting in the way of the examples. I'd like you to feel welcome in this book whatever your programming language might be.

However, there is a fragment of Java in this book. I used Java because it's more accessible to a non-Java programmer than C++ is to a non-C++ programmer. Why isn't this book devoted to the design of windows, icons and menus? There are two reasons: First, I don't believe that object orientation is useful only for the design of graphical user interfaces. Second, there are many books on the market devoted solely to the topic of object-oriented window design. I want this book to cover topics that are not well covered by the other object-oriented books on the market. However, in Chapter 7 I offer some notation for window-navigation design.

Is this book about a methodology?

No. As you know, a development methodology contains much more than design. For example, there's requirements analysis, library management and so on. Also, a true methodology needs to explain how the various development activities fit together. A lot of stuff!

So, instead of turning out a book as diffuse as many other books on object orientation, I decided to focus on a single topic: object-oriented design.

You've said a lot about what this book isn't about. What is it about?

It's about the fundamental ideas, notation, terminology, criteria and principles of object-oriented software design. Object-oriented software is software that comprises objects and the classes to which they belong. An object is a component in which methods (which are like functions or procedures) are organized around a set of variables (which are like data). A class implements a type defining the group of objects that belong to that class. The above modest sentences hold some surprising implications for software designers and programmers, implications that arise from the design concepts of inheritance, polymorphism and second-order design. But, since you asked a specific question, let me give you a specific answer.

Part I of the book (Chapters 1-2) provides an introduction to object orientation. Chapter 1 summarizes the key concepts and demystifies "polymorphism," "genericity," and all the other OO jargon. Chapter 2 sets object orientation into the framework of previous developments in software. If you're already familiar with object orientation (perhaps by having programmed in an object-oriented language), then you can skip or skim Part I.

Part II (Chapters 3-7) covers the Unified Modeling Language (UML), which has become the de facto standard notation for depicting object-oriented design. In passing, Part II also illustrates many of the structures that you find in object-oriented systems. Chapter 3 introduces the UML for depicting classes, along with their attributes and operations. Chapter 4 covers UML for hierarchies of subclasses and superclasses, associations, and aggregate and composite objects. Chapter 5 sets out UML for messages (both sequential and asynchronous), while Chapter 6 covers UML for state diagrams. Chapter 7 reviews UML for system architecture and the windows that form a human interface.

Part III (Chapters 8-14) covers object-oriented design principles in some depth. Chapter 8 sets the scene with the crucial notions of connascence and level-2 encapsulation. Chapter 9 explores the various domains that "classes come from" and describes different degrees of class cohesion. Chapters 10 and 11 form the central pillar of Part III, using the concepts of state-space and behavior to assess when a class hierarchy is both sound and extendible. Chapter 12 offers some light relief, as it examines designs taken from real projects, including both the subtle and the absurd. (Chapter 12 is really about the dangers of abusing inheritance and polymorphism.) Chapter 13 looks at some ways of organizing operations within a given class, and explains design techniques such as mix-in classes and operation rings that will improve class reusability and maintainability. Chapter 14 rounds off the book by taking a stab at the old question: "What makes a good class?" In answering this question, Chapter 14 describes the various kinds of class interface, ranging from the horrid to the sublime. A class with an exemplary interface will be a worthy implementation of an abstract data-type. If the class also obeys the fundamental principles laid out in earlier chapters, then it will be as robust, reliable, extensible, reusable and maintainable as a class can ever be.

Chapter 15 traces the development of an object-oriented component for a business application. In following the component's construction, I recall some of the object-oriented principles of the previous chapters. Although I've added plenty of examples, diagrams and exercises to reinforce what I say in the main text, I must admit that the material in Part III gets tough at times. Nevertheless, I decided not to trivialize or dilute important issues. Some aspects of object-oriented design are difficult and to suggest otherwise would be to patronize you. Anyway, I know you can take it!

Does this book cover everything in object-oriented design?

I very much doubt it. Each day, I learn more about object orientation, and I'm sure you do too. Indeed, it would be a dull world if a single book could tell us everything about object-oriented design and leave us with nothing more to learn. And everything in this book may not be completely true! I certainly changed my mind about one or two things after I wrote my previous books, as I became older and wiser -- well older, anyway.

So, although I think that I've covered many important design principles in this book, if you're serious about object orientation you should continue to read as much as you can and always challenge what you read.

Do you offer courses on object-oriented design?

Yes, we offer several courses on object-oriented topics. Our curriculum continually changes, so check out www.waysys.com for our latest offerings.

Bottom-line, as they say: Is this book for me?

What kind of question is that? You expect me to say "No!"? But seriously, folks, this book's for you if you are -- or are about to become -- a programmer, designer, systems engineer or technical manager on a project using object-oriented techniques. Even if you're a beginner to object orientation, you can glean a lot from this book by reading Part I, practicing some object-oriented programming and then returning to Parts II and III.

You should also read this book if you're a university student or professional programmer who has mastered the techniques of standard procedural programming and is looking for wider horizons. Much of the book's material is suitable for a final-year computer-science or software-engineering course in object orientation.

But, whatever your role in life, I hope that you enjoy this book and find it useful. Good luck!