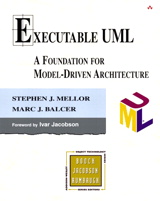 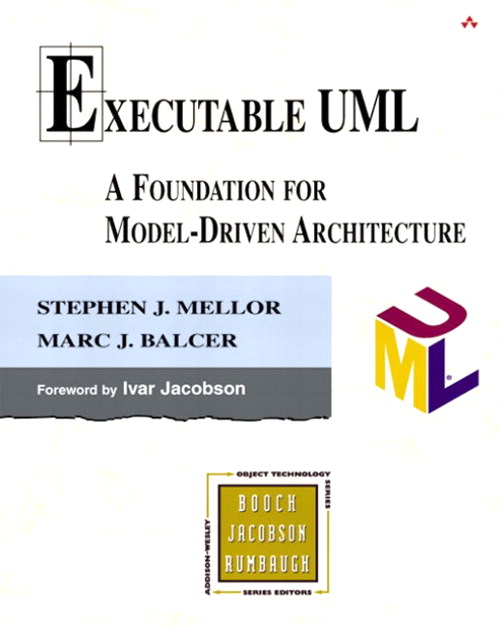 Using Executable UML (xUML), developers can build UML models that can not only be unambiguously interpreted by human readers, but can be tested and validated through actual execution, and ultimately translated directly and completely to target code. This technology offers immense potential for accelerating development projects, enhancing reliability, and reducing cost. In this book, two of the field's leading experts introduce every facet of xUML. The authors introduce Executable UML's goals, premises, and features; then drill down to explain its key elements. Along the way, readers will discover exactly how to use xUML to create software systems that can be tested even before they are coded, enabling far greater reliability at significantly lower expense. For all developers, analysts, and project managers seeking to improve software reliability, time-to-market, and value. This book will be especially valuable to real-time programmers, and to thousands of programmers who have used Shlaer-Mellor methodologies.

Exploring the Role of Executable UML in Model-Driven Architecture


Raising the Level of Abstraction.

Iterating between System and Domain Modeling.


Basics of Use Cases.

Working with Use Cases.

Levels of Use Cases.

Capturing the Correct Classes and Roles.

The Concept of Generalization and Specialization.

Mutual Exclusion and its Implications.


Concept of a Lifecycle.

Example Class with a State Machine.

Basics of the State Transition Table.

Concept of a Execution Trace.

Sequencing Signals on a Collaboration Diagram.


How to Think about Time.

Competition in the Domain.

Competition in the Models.


Finding Unit Tests for a Single Use Case.

Finding Test Cases from the Models.

Subsystems and the Class Diagram.

Bridging to the Model Compiler.


Compiling the Models: The Bookstore.

Model Compilers and the Software Platform.

Modeling the Model Compiler as a Domain.

At one time, the title for this book was Executable UML For Model-Driven Architectures (MDA) Using Aspect-Oriented (AO) Techniques with Extreme Programming (XP), Agile Modeling (AM), and Other Agile Alliance (AA) Processes as an Instance of the Rational Unified Process (RUP).

Eventually, we settled instead on Executable UML: A Foundation for Model-Driven Architecture. This title is snappier, but it's not fully buzzword-compliant, nor is it as descriptive as the original.

So what is this Executable UML? It is a profile of UML that allows you, the developer, to define the behavior of a single subject matter in sufficient detail that it can be executed. In this sense, the model is like code, but there's no point in writing "code" in UML just to rewrite it in Java or C++, so it's rather more revealing to examine what executable UML doesn't say that code might.

The model compiler targets a specific implementation embodying decisions about "coding:" tasking structures, distribution, data structures (which may be quite different from that suggested by the class structure), as well as the language. Model compilers can be extremely sophisticated, taking care of cross-cutting concerns such as transaction safety and rollback, or they can be sophisticated in a different way, targeting small footprint embedded systems with no tasking or other system support.

In general, a model compiler compiles several executable UML models, each of which captures a single cross-cutting concern to yield the running system. In this sense, executable UML makes use of the concepts in aspect-oriented programming.

Executable UML models support a new Object Management Group initiative, Model-Driven Architecture (MDA). This initiative is in its early stages, but its goal is to allow developers to compose complete systems out of models and other components. This goal requires at least an interface as contract and, behind the interface, the ability to express a solution without making coding decisions. That would be executable UML, or some variation.

This book does not describe model-driven architecture or its implications. Rather, this book focuses on one aspect of MDA that we believe to be critical: the ability to model whole subject matters completely and turn these models into systems. This ability, we believe, relies on being able to execute models. Hence executable UML.

You can use Executable UML in a deliberate process or, because the models are executable, an agile one. Our preference is agile and incremental because it keeps the focus on delivering working software.

And what about RUP? As one of our reviewers, Martin Fowler, so memorably said: "My biggest concern with RUP is that it's so loose that any process seems to qualify as an instance of RUP. As a result, saying you're using RUP is a semantics-free statement." So, we can reasonably assert that the process described by this book is an instance of RUP, and if you want, we do.

Is this the only possible Executable UML?

No. This rendition views each object as potentially having a state machine that can execute asynchronously and concurrently. We view this approach as necessary for today's distributed computing environments. However, one could define an executable UML that relies on synchronous method calls between objects to produce a completely synchronous model of the subject matter. Similarly, our particular use of the statechart is not the only possible one.

Is Executable UML a Standard?

Yes and No. The notational elements you'll see in this book conform to UML, and so qualify as a profile of that standard. In addition, the execution semantics defined here conform to UML, though we do both subset UML and impose certain rules to link the elements together. What is not yet a standard is the exact content of what can and should be interchanged so that we can guarantee that any and all model compilers can compile any arbitrary executable UML model.

Throughout this book, we use standards as much as they are established. In some areas, the book is intended to provide a basis for discussion of what should ultimately become a standard.

Will there be a standard one day, and how might it differ?

Yes, we hope so. Work has begun informally to define a standard and we will encourage and support it. We expect the standard to define the underlying semantics quite closely to what is outlined here, and to layer increasingly rich syntax on top.

Does that mean I should wait?

Not at all. This technology is taking off, and the basic elements are already established. Get ahead of the learning curve.

I know nothing about UML. Is this book too advanced for me?

We assume you have an intuitive understanding of the goals behind UML, but nothing more. We will show you all the elements you need to build an executable UML model.

I'm a long-time UML user. Do I need this book?

If you want to garner the benefits of executable UML, then you'll have to learn the elements that make it up. Focus on the definitions we use and the chapters that show how to build and execute models. Skip the notational stuff. Be prepared to unlearn some UML (and some habits of mind induced by UML) that is required to model software structure, but not required to specify an executable model.

What happened to model adornments such as aggregation or composition?

We don't need them for Executable UML. UML enables you to model software structure but that's not our purpose here so those adornments, and many others, are not in our profile.

Some of this seems familiar. Is this just Shlaer-Mellor in UML clothing?

Executable UML and Shlaer-Mellor share common roots. Both focus on execution and specification of an abstract solution, not on specifying software structure. Executable UML uses UML notation, which makes execution concepts accessible to a broader community.

I've used Shlaer-Mellor before. Is this any different?

A lot can happen in this industry in ten weeks, let alone the ten years since the publication of Object Lifecycles. First of all, of course, we all now use UML notation and vocabulary. (Resistance was futile.) Executable UML takes a more object-oriented perspective, no longer requiring identifiers or referential attributes, or other traces of Shlaer-Mellor's relational roots.

The addition of an action language that conforms to the UML is a major step forward. We hope the action language, and the very concept of an executable and translatable UML may one day be seen as a significant contribution of the Shlaer-Mellor community.

And finally, progress in tools makes certain conventions, such as event numbering, less critical to model understanding, though they are still helpful in keeping our minds clear.

A complete list of correspondences and differences appears in Appendix E.

How can I get an Executable UML tool?

All of the examples in this book were developed using Project Technology's tool, BridgePoint. A copy of BridgePoint can be downloaded from our book's website, http://www.projtech.com/.

How is this differnt from the old "draw the pictures, get some code" CASE tools?

There are two main differences. First, compiling models produces the whole system, not just interfaces or frameworks. Secondly, there are many different model compilers available to buy, and even more that can be built, to meet exacting software architecture needs.

Where has Executable UML been used?

Executable UML has been used to generate systems as large as four million lines of C++, and as small as hand-held drug delivery devices. Executable UML has also been used in lease-origination, web-enabled executive reporting, and intermodal transportation logistics systems.

Why did you write this book?

Because we had nothing better to do? No: There are lots of books out there that tell you about UML notation, but few of them focus attention on the subset you need for executability. Many books use UML to describe software structure. We explicitly spurn this usage.

Why should I buy this book?

Because it describes completely everything you need to know about executable UML: it's the Executable UML handbook.