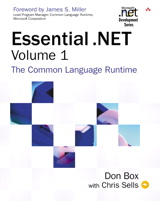 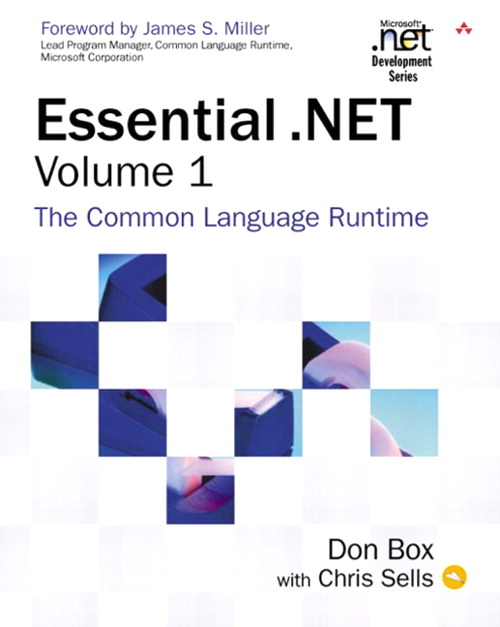 Essential .NET will enable developers to take advantage of the full power available to them in Microsoft .NET. It goes far beyond the features-based "how-to" books currently on the market to also explain the "why" behind C #, .NET, and the CLR. As with all of Don's books, it is packed with practical detail and expert advice. It promises to be the book developers will reach for first with questions about the CLR and .NET. In his new position at Microsoft Don is even better placed to evangelize for this book. He will be speaking everywhere, and will continue placing articles in MSDN, where he has already started excerpting this book. Since this book was first announced last fall, there has been a groundswell of interest in it. There will be a foreword from Jim Miller, the inventor of the CLR. Originally appeared in October 2001 catalog.

(NOTE: Each chapter concludes with Where Are We?)

The Evolution of the Programming Model.

Types and Base Types.


Execution Scope and the CLR.

AppDomains and the Assembly Resolver.

The CLR as a COM Component.

In 1998, Microsoft held a Professional Developer's Conference (PDC) in San Diego. COM luminary Charlie Kindel stood up in a general session and proclaimed "no more GUIDS—no more HRESULTS—no more IUnknown." He and Mary Kirtland proceeded to show the basic architecture of the CLR, then known as the COM+ Runtime. Later in the session, Nat Brown and David Stutz stood up and demonstrated cross-language inheritance using Visual Basic and Java. Attendees actually went home with CDs containing primitive versions of compilers that could reproduce this very odd demonstration.

It is now February 2002 and this technology has finally shipped in release form.There are two days that will forever demarcate the evolution of the Microsoft platform. In May of 1993, Windows NT 3.1 was released, which marked the end of the DOS era. On February 13, 2002, the Common Language Runtime (CLR) was released as part of the .NET Framework, marking the end of the COM era.

XML Web Services are used to integrate software at Internet-scale. Both rely on similar ideas, that is, strongly typed contracts and encapsulation. Fundamentally, though, they are two distinct technologies that one can elect to adopt independently of one another. It is completely reasonable to adopt XML Web Services prior to the CLR (in fact, many production web services have already done this). It is also reasonable to adopt the CLR in the absence of XML Web Services in order to access CLR-specific features such as code access security or superior memory management facilities. Going forward, however, both the CLR and XML Web Services will be central to the Microsoft development platform, and it is only a matter of time before both of these technologies play a role in everyone's development experience.

The CLR and XML Web Services are both focused on strongly-typed contracts between components. Both technologies require developers to describe component interactions in terms of type definitions or contracts. In both technologies, these contracts share two key ideas that tend to permeate their use: metadata and virtualization.

Both the CLR and XML Web Services rely on high-fidelity, ubiquitous, and extensible metadata to convey programmer intention. Metadata conveys the basic structure and type relationships to developers who will consume a CLR component or XML Web Service. Equally important, ubiquitous metadata informs the tools and underlying platform of what the component developer had in mind when they were authoring the code.

This metadata-directed "clarvoyance" allows the platform to provide richer support than would be possible if the component was completely opaque. For example, various aspects of object-to-XML mapping are captured in metadata for use by the CLR's XML serializer. How the developer intended the XML to look is conveyed through declarative metadata extensions rather than through explicit labor-intensive coding.

The second key idea that permeates CLR and XML Web Service contracts is the notion of virtualization. Both technologies emphasize the separation of semantic intentions from physical implementation details. Specifically, the metadata for both technologies work at an abstract structural level rather than in terms of low-level data representations and implementation techniques. By specifying inter-component contracts at this "virtual" level, the underlying platform is free to express the contracts in the most appropriate manner available. For example, by expressingWeb Service contracts in terms of an abstract data model, the plumbing is free to use an efficient binary data representation for performance or the text-based XML 1.0 representation for maximum interoperability.

Because contracts are virtualized, this specific detail of the contract can be bound at runtime based on post-development characteristics.

Because this volume focuses exclusively on the CLR, a working definition of the CLR is in order. The CLR is fundamentally a loader that brings your components to life inside an operating system process. The CLR replaces COM's <code>CoCreateInstance</code> and Win32's <code>LoadLibrary</code> as the primary loader for code.

The CLR is made accessible through compilers that emit the CLR's new file format. Program language wonks view the CLR as providing key building blocks for compiler writers that reduce the complexity of compiler implementations. In contrast, systems wonks often view programming languages as facades or "skins" over the underlying constructs of the CLR. The author falls firmly into the latter camp. However, programming languages are a neccessary lens through which even low-level systems plumbers view the CLR. To that end, examples in this book are written in various programming languages, since binary dumps of metadata and code are arcane to the point of being incomprehensible.

This book is divided into two volumes. Volume 1 focuses on the Common Language Runtime. Volume 2 will focus on XML Web Services. While the two technologies share a fair number of core concepts, the thought of covering them both in a single book made my head spin.

This book was written against Version 1 of the CLR. Some of the internal techniques used by the CLR may evolve over time and may in fact change radically. In particular, the details of virtual method dispatch are very subject to change. They are included in this book largely as an homage to COM developers looking for where the vptr went. That stated, the basic concepts that are the focus of this book are likely to remain stable for years to come.

Throughout the book, I use assertions in code to reinforce the expected state of a program. In the CLR, assertions are performed using <code>System.Diagnostics.Debug.Assert</code>, which accepts a boolean expression as its argument. If the expression evaluates to false, then the assertion has failed and the program will halt with a distinguished error message. For readability, all code in this book uses the short form <code>Debug.Assert</code>, which assumes that the <code>System.Diagnostics</code> namespace prefix has been imported.

My perspective on .NET is fairly agnostic with respect to language. In my daily life, I use C# for about 50% of my CLR-based programming. I use C++ for about 40%, and resort to ILASM for the remaining 10%. That stated, most programming examples use C# if for no other reason than it is often the most concise syntax for representing a particular concept or technique. Though some chapters may seem language focused, none of them really are. The vast majority of this book could have used C++, but, given the tremendous popularity of C#, I elected to use C# to make this book as accessible as possible.

This book focuses on the Common Language Runtime and is divided into ten chapters:

Chapter 1 The CLR as a better COM

This chapter frames the discussion of the CLR as a replacement for the Component Object Model (COM) by looking at the issues that faced COM developers and how the CLR addresses those issues through virtualization and ubiquitous, extensible metadata.

Ultimately, the CLR is a replacement for the OS and COM loaders. This chapter looks at how code is packaged and how code is loaded, both of which are significantly different from the Win32 and COM worlds.

Components are containers for the code and metadata that make up type definitions. This chapter focuses on the CLR's Common Type System (CTS), including what constitutes a type and how types relate. This is the first chapter that contains significant chunks of source code.

The CLR makes type a first-class concept in the programming model. This chapter is dedicated to the explicit use of type in CLR programs with an emphasis on the role of metadata and runtime type information.

The CLR provides a rich architecture for intercepting method calls. This chapter dissects the CLR's interception facilities and its support for aspect-oriented programming. These facilities are one of the more innovative aspects of the CLR.

The CLR uses AppDomains rather than OS processes to scope the execution of code. To that end, this chapter looks at the role of AppDomains both as a replacement for the underlying OS's process model as well as an AppDomain's interactions between the assembly resolver/loader. Readers with Java roots will find the closest analogue to a Java class loader here.

One of the primary benefits of the CLR is that it provides a secure execution environment. This chapter looks at how the CLR loader supports granting privileges to code and how those privileges are enforced.

I worked for the World Wide Web Consortium in its early days at the Massachusetts Institute of Technology (MIT). We decided we needed to learn about both COM and CORBA, at that time the leading frameworks for object-oriented programming over the network.

I called our Microsoft representative and asked who he could send to teach the Consortium staff the fundamentals of COM. I explained that the Consortium staff were very technical and were interested in the "why" of things at least as much as the "how." I explained that we were designing the next generation Web protocols and knew just about everything there was to know about application protocols on the Internet, and that we'd built some very large object-oriented programs in C++ and Objective C.

I fully expected him to suggest someone from Microsoft. Instead he said, "The best person in the world is Don Box." And that's how I met Don, one of the finest teachers I know. Don not only explained well and ran labs well and wrote well, but he never broke down under endless detailed questioning, ranging from the high-level "Why would you build the architecture that way?" to the low-level "Where does that bit ever get set?" So Don taught me (along with hundreds of thousands of others) what COM is, why COM is, and what the problems with COM are. Along the way, just off-hand 'cause he thought we might be interested, he also did an amazingly good comparison to the CORBA technology and to the Web technology we were designing and building.

I left the MIT and the Web Consortium to come to Microsoft to work on a top-secret project called "COM+ Services." My business card read "Program Manager, Garbage Collection and Related Rubbish" because all we could say (even internally at Microsoft) was that it had something to do with programming languages and distributed systems, and it had a garbage collector. I'm still on that same project at Microsoft, working almost four years to help design and build what is now the Common Language Runtime. I've worked on the IL design, four different JITs, the metadata, the garbage collector, the execution engine, and the ECMA (and soon, hopefully, ISO) standards.

I was sure that I'd be able to turn around and teach Don something I'd learned in this process (I'm not a bad teacher myself). But Don beat me to the punch. He told me to read this book. And (darn it) he's taught me stuff I didn't know about my own product! And I bet he'll teach you something, too.

Code That Fits in Your Head: Heuristics for Software Engineering