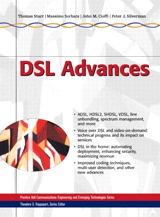 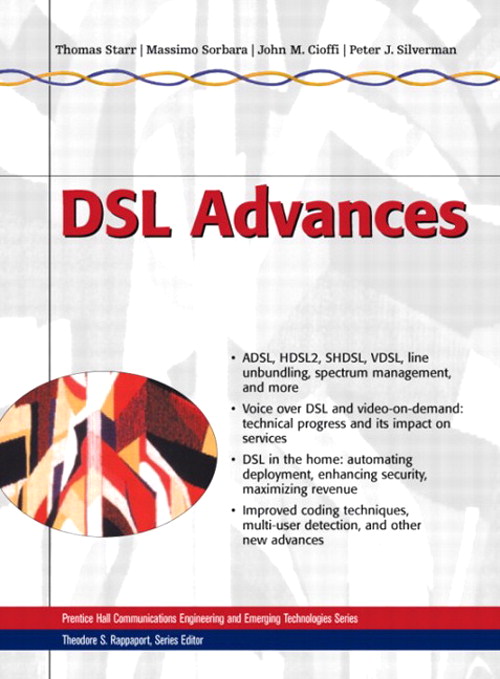 Digital Subscriber Lines (DSLs) have transformed millions of ordinary phone lines into broadband arteries that link homes and businesses to the Internet at megabit speeds. DSL Advances brings together the state of the art in DSL technology and architecture for every technical professional and manager. The authors of the classic Understanding Digital Subscriber Line Technology review the key challenges service providers and equipment manufacturers face now, preview tomorrow's most important standards and technical enhancements, and offer new insights into today's regulatory and business environment. Coverage includes:

2. Review of Transmission Fundamentals for DSLs.

5. Handshake for the ITU-T Suite of DSL Systems.


The History of DSL and Telephony. What is Voice-over DSL? Telephony and Its Rapid Evolution. VoDSL Architectures. The Appeal of Voice-over DSL. Service Models by Carriers. Standards Efforts for VoDSL. References.


Appendix B. A Photographic Tour of the Telephone Company Network.

The title DSL Advances refers to the multitude of developments in digital subscriber line technology, network architectures, and applications since DSL entered the mass market in early 1999. The title also speaks of the evolution of DSL from an obscure network technology to a consumer service used by tens of millions of customers throughout the world. Many books, including Understanding Digital Subscriber Line Technology (Starr, Cioffi, and Silverman; Prentice Hall, 1999) described the fundamentals of DSL technology and its usage up to early 1999. DSL has transformed from a technology to a networked lifestyle enjoyed by millions of people.

This book is the second in a series of books on DSL. Chapters 1 and 2 of DSL Advances provide the reader with a brief recap of the fundamentals, and then continue the story with the developments during DSL's golden age. Although this book is useful on its own, it is best to have previously read Understanding Digital Subscriber Line Technology.

After 1998, the DSL flower bloomed and flourished. The recent developments are manifold. DSL services reached the one-million-customer mark by mid-2000, and accelerated to serve over 30 million customers by the end of 2002. Five percent of homes in the United States had broadband connections by the end of 1999.1 The transition from low-volume, pilot service offerings to serious attempts to reach a mass market was stimulated by the rapid onslaught of data service competition from cable modems and the long needed stabilization of the regulatory environment. In the United States, as well as a growing list of other countries, regulatory developments provided the key elements for the advance of competitive local exchange carriers (CLECs): assured local loop unbundling, central office collocation, access to telco operations systems, and asymmetric DSL (ADSL) line sharing. Innovation was not limited to DSL equipment; the phone line infrastructure evolved to improve its ability to support DSLs. SBC Communications led the way by deploying many thousands of fiber-fed next generation digital loop carrier (NGDLC) terminals that shortened the length of twisted-wire copper lines. Increasingly, customers more than three miles from the Central Office can receive DSL services. With approximately one-third of U.S. customers served via DLC and NGDLC in the year 2000, and projections for this number to grow to nearly 50% by 2004, the average loop length is shrinking.

DSL was a dark horse in 1988 when ISDN was stumbling out of the starting gate and chief technology officers were asking why bother to develop HDSL since fiber would be "everywhere" in a couple of years. Few would have imagined DSL advertisements on city buses, and multi-megabit per second DSL modems selling for about the same price as a 14.4 kb/s voice-band modem in 1988. However, DSL is an interim technology. Eventually, fiber-to-the-home/business and broadband wireless will capture the market. Some fiber-optimistic telephone companies expect that by the year 2010 DSL will have a minority market share in the top market areas. Yet major telecommunications technologies do not die quickly; DSL will see niche usage well past 2010. Will the market success of cable modems persist? Cable modem service is expected to grow, but the growth rate may slow if the upgrading of cable plant for two-way digital service stalls with the completion of upgrades for the most attractive areas. As the cable-modem take rate grows, cable companies will face the dilemma of pumping much more money into service with poor return or providing a service with poor performance. Cable modem service is available in few business areas; unlike DSL, where high-margin business customers help pay the way for the low-margin residential customers. DSL's strengths are its provision by many differentiated service providers and its ultimate availability in nearly all business centers and most residential areas.

Chapters 3 through 7 introduce the newest members of the DSL family and report on the maturation of some of the older family members. These chapters show that the various types of DSL share similarities in the underlying technology and network architecture. The recent DSL advances include symmetric DSLs, as well as the popular ADSL. The symmetric HDSL and SDSL technologies transformed into HDSL2 and SHDSL. HDSL2 conveys 1.5 Mb/s via two wires, whereas HDSL required four wires. SHDSL conveys the same data rates as SDSL, but on loops 2,000 to 3,000 feet longer. The newer symmetric DSL technologies will quickly make HDSL and SDSL obsolete because of the improved performance and two other factors vital for the success of any new DSL technology. HDSL2 and SHDSL are based on industry standards with multivendor interoperability. HDSL2 and SHDSL are designed to minimize crosstalk into other lines. In some ways, VDSL is a delayed opportunity. Very high bit-rate DSL (VDSL) conveys rates as high as 52 Mb/s via very short copper end-section that is usually served via an optical network unit (ONU) that connects to the network by fiber. The cost of the required multitude of ONUs complicates the VDSL business case, while radio frequency ingress and egress force major technical compromises. VDSL is searching for its best opportunity: Will the line code be DMT or single-carrier? Will the prime services be symmetric or asymmetric? VDSL's opportunities are diminished by the industry standards's inability to reach a single VDSL standard.

Chapters 9 and 10 warn that the continued success of DSL is not assured. DSL could become a victim of its own success if the crosstalk between DSLs in the same cable is not managed. This calamity will hopefully be averted by the T1.417 local loop spectrum management standard developed in the T1E1.4 Working Group. This standard is expected to be the technical foundation of telecommunications policy in the United States for the reliable use of unbundled loops. Other countries are developing spectrum management rules to address their unique environment. Traffic laws and police are needed for drivers to safely and efficiently share the road. Limited transmitted signal power and equipment certifications are required for service providers to effectively share the copper pairs in the access cables. Even with such existing static spectrum management, DSL crosstalk diminishes the data rates on other lines, in many cases by a factor of 3 to 10. Chapter 11, which discusses the new area of dynamic spectrum management (DSM), is an exciting first look at the tremendous future possibility as DSL management becomes more automated and sophisticated.

High-speed Internet access and the growing popularity of telecommuting stimulated the mass market for DSL, but in the spirit of "what is old is new," a "new" application for DSL was discovered: voice. DSL was not just for data. Although ADSL was always designed to carry one voice channel, Chapter 16 presents the various ways voice-over-DSL (VoDSL) carries many voice channels in addition to data. The additional service revenue from the same line was icing on an already delicious cake. Furthermore, the many voice calls on one pair of wires reduced the exhaustion of spare pairs in cables. The other new/old emerging application is video. Video-on-demand spurred ADSL in 1994 until the economic reality of competing with videotape rentals stalled ADSL deployment. In a cliff-hanger rescue, ADSL was saved by the Internet. The ADSL lines to millions of homes can connect to video servers as well as data servers. Video-on-demand has resurfaced, and this time it is cost competitive. Video-on-demand via ADSL will become especially attractive with 1.3 Mb/s MPEG4 video coding providing picture quality better than VHS videotapes.

Chapters 12 to 16 show the results from use of DSL in the real world, and reach beyond the physical layer core of DSL by discussing the end-to-end network that surrounds DSL. The customer end of the phone line is not the end of the story. Chapter 12 compares methods for DSL to connect to all networked devices within the customer's premises: dedicated LAN wiring, shared phone wiring, shared AC power wiring, and wireless. Both centralized splitter and distributed in-line filter premises wiring configurations are discussed. Chapter 13 presents the developments in the DSL Forum and elsewhere to remove the labor from DSL: automatic configuration of the customer's equipment and flow-through service provisioning. Chapter 14 explores and compares the diverse breadth of upper-layer communications protocols used by DSLs. Chapter 15 exposes a topic of great importance that is barely mentioned in most DSL books: security. Security risks and essential safeguards for every DSL vendor, service provider, and user are discussed.

The views expressed in this book are solely those of the authors, and do not necessarily reflect the views of the companies and organizations affiliated with the authors.