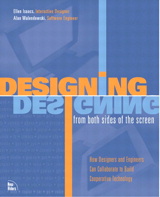 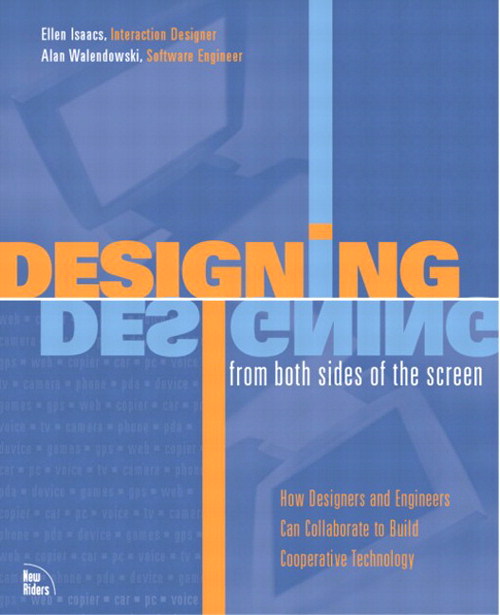 Designing from Both Sides of the Screen: How Designers and Engineers Can Collaborate to Build Cooperative Technology

Written from the perspectives of both a user interface designer and a software engineer, this book demonstrates rather than just describes how to build technology that cooperates with people. It begins with a set of interaction design principles that apply to a broad range of technology, illustrating with examples from the Web, desktop software, cell phones, PDAs, cameras, voice menus, interactive TV, and more. It goes on to show how these principles are applied in practice during the development process -- when the ideal design can conflict with other engineering goals.

The authors demonstrate how their team built a full-featured instant messenger application for the wireless Palm and PC. Through this realistic example, they describe the many subtle tradeoffs that arise between design and engineering goals. Through simulated conversations, they show how they came to understand each other's goals and constraints and found solutions that addressed both of their needs -- and ultimately the needs of users who just want their technology to work.

Designing from Both Sides of the Screen: Don't Impose—Respect Mental Effort


It's the Relationship, Stupid. How to Collaborate.


Treat Clicks as Sacred. Remember Where They Put Things. Remember What They Told You. Stick with a Mode.


Use Visual Elements Sparingly. Make Common Tasks Visible; Hide Infrequent Tasks. Give Feedback; Show Signs of Progress. Keep Preferences to a Minimum; Give Smart Defaults. Follow Conventions (Even If They're Not Your Ideal Design). Look for “Widgetless Features”.

7. Laying Out the User Interface.

8. Architecting with the UI in Mind