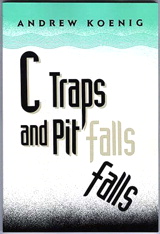 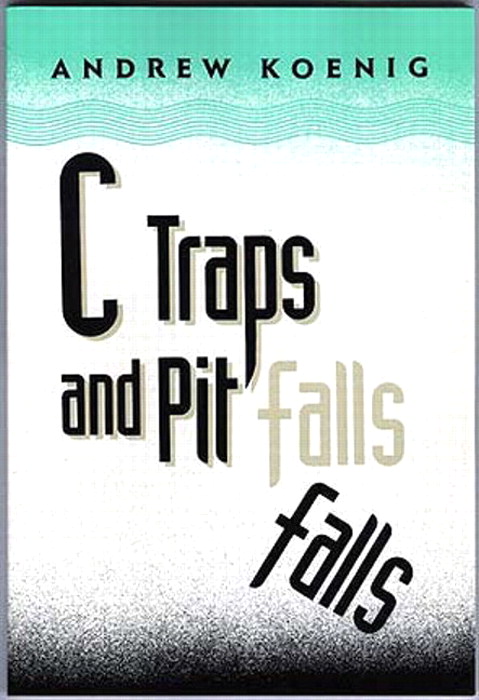 Even C experts come across problems that require days ofdebugging to fix. This book helps to prevent such problems byshowing how C programmers get themselves into trouble. Each ofthe book's many examples has trapped a professional programmer.

In addition to its examples, C Traps and Pitfalls offers adviceon:

Distilled from the author's experience over a decade ofprogramming in C, this book is an ideal resource for anyone,novice or expert, who has ever written a C program.

Operators don't always have the precedence you want.

The dangling else problem.

Pointers are not arrays.

Null pointers are not null strings.

Returning a value from main.


What is a linker?

Name conflicts and the static modifier.

Macros are not functions.

Macros are not statements.

Macros are not type definitions.

What's in a name?

How big is an integer?

Are characters signed or unsigned?

How does division truncate?

How big is a random number?

An example of portability problems.

Tools that are comfortable after experience are often more difficult to learn at first than those that feel right immediately. Student pilots start out overcontrolling, turning first flights into roller-coaster rides, until they learn how light a touch flying really requires. Training wheels on a bicycle make it easier for a novice to ride, but get in the way after that.

My first effort to collect such problems was in 1977, when I gave a talk called PL/I Traps and Pitfalls at the SHARE (IBM mainframe users' group) meeting in Washington, DC. That was shortly after I moved from Columbia University, where people used PL/I heavily, to AT&T Bell Laboratories, where people use C heavily. The decade that followed gave me ample experience in how C programmers (including me) can get themselves into trouble if they're not certain of what they're doing.

I started collecting C problems in 1985 and published the collection as an internal paper at the end of that year. The response astonished me: more than 2,000 people requested copies of the paper from the Bell Labs library. That convinced me to expand the paper into this book.

What This Book Is

C Traps And Pitfalls aims to encourage defensive programming by showing how other people, even experienced professionals, have gotten themselves into trouble. These mistakes are generally easy to avoid once seen and understood, so the emphasis is on specific examples rather than generalities.

This book belongs on your shelf if you are using C at all seriously, even if you are an expert: many of the professional C programmers who saw early drafts said things like "that bug bit me just last week!" If you are teaching a course that uses C, it belongs at the top of your supplementary reading list. What This Book Is Not

This book is not a criticism of C. Programmers can get themselves into trouble in any language. I have tried here to distill a decade of C experience into a compact form in the hope that you, the reader, will be able to avoid some of the stupid mistakes I've made and seen others make.

This book is not a cookbook. Errors cannot be avoided by recipe. If they could, we could eliminate automobile accidents by plastering the countryside with "Drive Carefully" signs! People learn most effectively through experience--their own or someone else's. Merely understanding how a particular kind of mistake is possible is a big step on the way to avoiding it in the future.

This book is not intended to teach you how to program in C (see Kernighan and Ritchie: The C Programming Language, Second Edition, Prentice-Hall 1988), nor is it a reference manual (see Harbison and Steele: C: A Reference Manual, Second Edition, Prentice-Hall, 1987). It does not mention algorithms or data structures (see Van Wyk: Data Structures And C Programs, Addison-Wesley 1988), and only briefly discusses portability (see Horton: How To Write Portable Programs In C., Prentice-Hall 1989) and operating system interfaces (see Kernighan and Pike: The Unix Programming Environment, Prentice-Hall 1984). The problems mentioned are real, although often shortened (for a collection of composed C problems see Feuer: The C Puzzle Book, Prentice-Hall 1982). It is neither a dictionary nor an encyclopedia; I have kept it short to encourage you to read it all.

Your Name in Lights

I'm sure I've missed some pitfalls. If you find one I've missed, please contact me via Addison-Wesley. I may well include your discovery, with an acknowledgement, in a future edition.

A Word about ANSI C

As I write this, the ANSI C standard is not yet final. It is technically incorrect to refer to "ANSI C" until the ANSI committee finishes its work. In practice, though, the ANSI standard is far enough along that nothing I say about ANSI C is likely to change. C compilers are already available that implement many of the significant improvements contemplated by the ANSI committee.

Don't worry if your C implementation does not support the ANSI function syntax mentioned here: it is easy enough to understand the parts of the examples where it matters, and you can fall into the traps described there regardless of what version of C you use.

A collection like this could not possibly have been made in isolation. People who have pointed out particular pitfalls include Steve Bellovin, Mark Brader, Luca Cardelli, Larry Cipriani, Guy Harris and Steve Johnson, Phil Karn, Dave Kristol, George W. Leach, Doug McIlroy, Barbara Moo, Rob Pike, Jim Reeds, Dennis Ritchie, Janet Sirkis, Richard Stevens, Bjarne Stroustrup, Ephraim Vishnaic, and one contributor who wishes to remain anonymous. For brevity, I've mentioned only the first person to report any particular problem to me. Of course, I doubt any of the people I've mentioned actually invented the programming errors they pointed out to me, and if they did I doubt they'd admit it! I know I've made many of them myself too, some several times.

It has been a delight to work with the people at Addison-Wesley, including Jim DeWolf, Mary Dyer, Lorraine Ferrier, Katherine Harutunian, Marshall Henrichs, Debbie Lafferty, Keith Wollman, and Helen Wythe. I'm sure they've gained from the aid of others whom I haven't met.

I am particularly grateful to the enlightened managers at AT&T Bell Laboratories who made it possible for me to write this book at all, including Steve Chappell, Bob Factor, Wayne Hunt, Rob Murray, Will Smith, Dan Stanzione, and Eric Sumner.

The title of this book was suggested by Robert Sheckley's science-fiction anthology The People Trap and Other Pitfalls, Snares, Devices and Delusions (as well as Two Sniggles and a Contrivance), published by Dell Books in 1968.

Learn C the Hard Way: Practical Exercises on the Computational Subjects You Keep Avoiding (Like C)